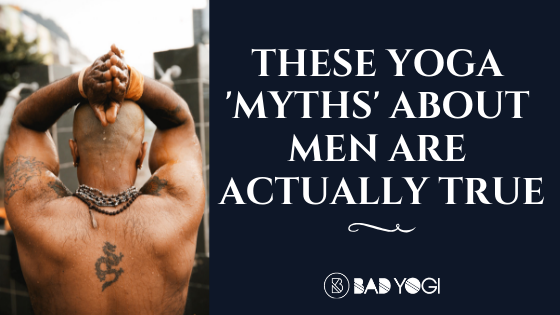 These Yoga ‘Myths’ About Men Are Actually True

The yoga world is full of myths, and full of online articles that bust them. I read in one fascinating article recently that yoga isn’t just for women – say what? Kidding aside, I’m sorry to say folks, some of the myths about men and yoga are actually true. Turns out when it comes to yoga, we can be quite predictable. But then, you’re already smashing stereotypes if you’re practicing yoga. What’s four more?

Men are inflexible (in certain ways)

A chosen few may be born with fortunate genetics (or an overzealous childhood gymnastics coach), but the majority of men naturally come with tight hamstrings. According to a 2014 study, it’s a mix of higher passive stiffness and lower stretch tolerance. Tie that in with a lifetime of video game playing and office desk working, and you have a body perfectly formed to occupy a sitting position.

Can’t touch your toes? Don’t sweat it. It’s entirely normal for new male yoga practitioners. In fact, it can take years to fully unlock the hamstrings. Ultimately we all have to play the hand we’re dealt, but what we lack in flexibility we often make up for with natural strength. In class, you may struggle in forward bends but be the only one capable of Chaturanga. Everyone has their own challenge to overcome.

Yoga is hard for men (and women)

Let’s be honest, the first lesson men get from their first yoga class is often just how difficult yoga can be. It can be a rude awakening to those unaccustomed to moving and bending. Our tight hamstrings and narrow hips don’t lend themselves well to a lot of poses. The struggle is inevitable – but, in many ways it’s also desirable.

It’s through challenge that we grow, and yoga is challenging regardless of age, experience or the anatomy between your legs. But that’s kind of the point. As B.K.S Iyengar said, “The pose begins when you want to leave it”. So yeah, yoga can be hard, hard for everyone, but the next important thing you learn, is that that “being good” doesn’t matter.

Men are competitive (but it doesn’t last long)

Sure, men can be competitive. We often have a habit of pushing ourselves too hard at first, determined to squeeze ourselves into poses we’re probably not ready for. But it doesn’t last. After all, yoga is the perfect tonic for a fiery ego.

An Ashtanga class is usually a pretty swift ego check, but eventually any yoga practice will do the trick. Except for arm balances, where it comes right back. I know I’m not the only one secretly thinking “this is my moment”. I know “being good” doesn’t matter, but it’s nice to have a pose that comes naturally. Honestly, I try to not become attached to the outcome, but you better bet I’m gonna give that crow pose my all.

Anybody who’s practiced yoga knows that it’s far from just stretching. Yoga can kick your ass, and make you strong as hell – but it can’t offer everything that a gym can.

There’s a Chaturanga variation for every day of the week to replicate your “push” movements (push ups, chest presses, etc), but there’s no real way of using just your own body in a pulling exercise without leaving your mat. No classic asana anyway, but yoga is getting weirder by the month.

Of course, there are ways if you borrow some movements and props from pilates, or you can just keep doing your workouts in the gym too. After all, there are no purists in yoga… right? 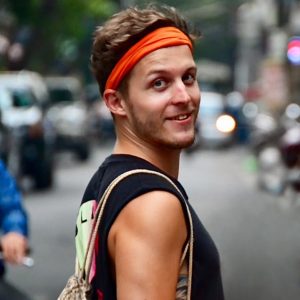 Dan is a former research scientist with a degree in Human Biosciences. He has committed his personal and professional life to the yoga journey and he hopes to inspire more men to take up yoga. A sucker for cold drip coffee and lover of all things coconut, Dan can usually be found chilling in a coffee shop or down at the beach.