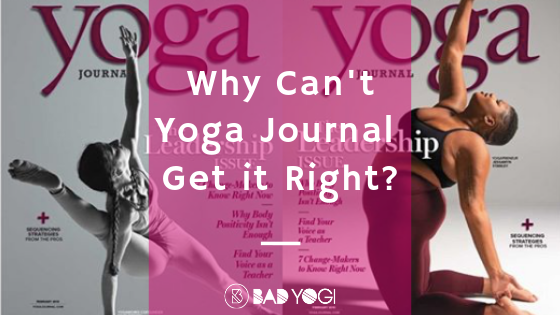 Conversation Starters: Why Can’t Yoga Journal Get it Right?

Yoga Journal has found themselves in a bit of hot water… again. For what feels like the 483,920th time. For years, Yoga Journal has faced criticism from body positive activists about mixed messages and unattainable ideas promoted through advertising and articles.

In 2010, they faced heat for their lack of diversity in images in their cover models and advertisements. They’ve been criticized for promoting products like diet pills, and also using “sexualized images of women” to sell their products.

In 2014, Yoga Journal tried to make good with an article, “Love Your Curves,” in an attempt to please the growing body positivity movement. In this instance, readers felt they missed the mark entirely, by suggesting women buy the “right” type of clothing to hide their curves.

Naturally, this has resulted in a fair amount of effort into redesigning their image of body positivity and acceptance, but critics are… critical. And yogis can be some of the most critical of the critical as we sit on our high (vegan) horses made of organic kale.

Here we are again, in 2019, and still not learning our lessons. In the latest wave of criticism of the magazine, Yoga Journal is facing heat over the cover of the January/ February 2019 issue shared by Maty Ezraty and Jessamyn Stanley. 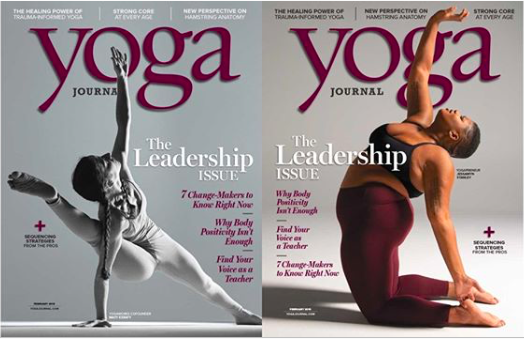 Even the comparison of the two individuals, in itself, is polarizing. Jessamyn is a social media sensation. If you visit her website, her bio starts by (literally) boldly saying that she is a “Yoga Teacher. Writer. Body Positivity Advocate.” Meanwhile, Maty Ezraty (purposely) has little-to-no social footprint. Maty is rooted more in traditional yoga styles and practice. She is a powerful voice for the yoga community, too- credited to helping bring yoga to the forefront in our culture.

While I received Jessamyn’s cover in the mail, and thought NOTHING of it other than “Wow! beautiful human, beautiful photo,” complaints began to arise from folks who felt that Yoga Journal was “pulling a Yoga Journal” again and not giving Jessamyn the right to the entire cover. By herself. Not shared with YETANOTHER white woman depicting the stereotype of the ‘perfect’ yogi.

I’m going to go out on a limb and say that what Yoga Journal is saying that they are now trying to do has been Bad Yogi’s mission since Day 1. While I appreciate the fact that the yoga world is very slowly being more accepting of various yoga molds, it’s an uphill battle.

While they may be a bit off target, not everyone can be as accepting of ALL yogis as Bad Yogi. Kidding. Kind of. They do seem to be starting to “get it”. Can we all just agree that yoga is a practice, which takes MANY forms and benefits ALL people? Yoga is NOT restricted to one race, religion, age OR ability.

Let’s be honest. Racism is (sadly) alive and well in 2019, as is fat phobia. We applaud Yoga Journal for putting Jessamyn on their cover. Having her share the cover, when that isn’t their typical stance is, well, strange.

Nonetheless, we wonder whether this shared cover time is REALLY worth your time and anger. If not, divert it to something that matters (e.g., for those of us in the US, the high rate of imprisonment and early deaths for black males). And if changing the landscape of race and yoga is aligned with your ideals, go for it. But don’t waste your time being pissed for Jessamyn. Trust me, she’s doing JUST fine in her corner of the internet, teaching us that yoga offers something for everyone. She’s inspired me several times over, and I’m sure she’ll continue to do so.

While the editorial written by Carin Gorrell is well written and communicated, her overarching message is lost if it still falls off-target. We are heavily influenced by what we see online in short form, with a lot of “reading” being missed by folks these days.

What do YOU think?

In the Letter From the Editor (before any backlash), Carin asked the following questions which we’re interested in YOUR thoughts:

More than anything, we want to know… what do YOU think of this situation? Is Yoga Journal acting poorly here, despite good intentions? Are people crying about nothing? Is this an issue we should hold space for? How CAN we make a difference? What things do you think leaders in yoga should be doing to make yoga more accepting of ALL people?