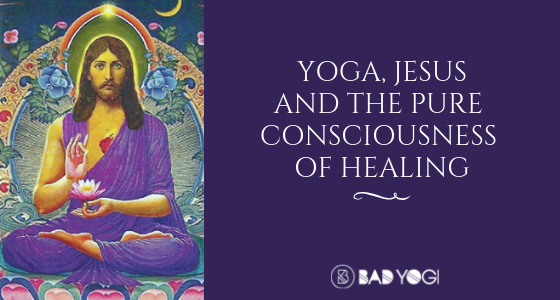 The yoga world accepts the notion of a unified single consciousness, but it’s not often talked about. To the wider society, esoteric talk is wild speculation; however, quantum studies in the subatomic realm  suggest that everything is composed of vibrational energy. Even if we never see it through a multi-million dollar subatomic microscope. Yogic philosophy maintains that anything existing in matter has previously existed in the unmanifest cosmic seat of existence. Yoga named this place Hiranyagarbha, and held it as the origin of all creation and the place of potential. Technically, hiranya means golden and garbha means womb and its symbol is the golden egg. Some yogis know hiranyagarbha as the heart and some Indian temples designate their sacred center space as the golden womb. It’s also seen as the location for the foundational sound of creation; sometimes it’s called the unstruck sound of creation. Yogis know it as the OM. Physics has opened up big ideas like the notion of energy as vibration and a not-yet manifest form of matter. This science has helped Westerners accept that matter is not as concrete as we thought. Quantum studies maintain that the unmanifest exists and is as real as each of us here and now. However, is unrecognizable until energy and matter bring it into material form or until the vibrational energy matches our visibility spectrum. This is how healing consciousness moves, too. For consciousness and observation of a thing also changes the mode of being in that which is observed. The Heisenberg Indeterminacy Principle affirmed this insight and discovered it’s not possible to observe matter without influencing its actions. And while this principle was developed studying the velocity and speed of quantum particles, it applies to all matter. In the Christian tradition, a story is told about friends of a paralytic man and their determination to place him in close proximity to the pure consciousness of healing in the figure of Jesus. When the paralytic on his pallet was lowered through the roof, to the floor where Jesus sat, the presence and pure consciousness of healing deeply affected the man’s being. The Indeterminancy Principle is a two way interaction and is much like psychology’s notion of two way movement – transference and countertransference – in the unconscious when people meet. Change, for the paralytic, occurred when his friends acted by opening the door of  unmanifest possibility, and in that moment, the man in need of healing came into the presence of pure healing consciousness. This also happens in yoga. Yoga works on the principle of uniting purusha (consciousness), and prakriti (matter). In yoga thought, life is a blending of esoteric and exoteric, combining matter and mind. In Teaching Yoga: Essential Foundations and Techniques, Mark Stevens writes, “According to the original texts, there are three purposes of Hatha yoga: (1) the total purification of the body, (2) the complete balancing of the physical, mental, and energetic fields, and (3) the awakening of purer consciousness through which one ultimately connects with the divine by engaging in practices rooted in the physical body.” This is what yoga does through mindful meditation, movement, and breath, for in those moments the yogi embodies a deep consciousness of spirituality in their body. This blend is at the center of Yoga Temple workshops I conduct. Which center on healing stories, sacred scriptures, and historical mythologies. If this healing story of the paralytic was something that happened just once to one person a long ways away and a long time ago it wouldn’t matter to us. However, the story of a transformed woman or man becomes real when we realize that we are the paralytic man and the paralytic woman transformed and healed. Paralyzed by fear, overwhelmed by responsibility, or weighted down by the pace of life. Yet, realizing our state of paralysis is the first of many steps to healing consciousness. Everyone benefits in some unobservable way when friends put them in proximity to new dimensions of healing. When friends lower other friends through a roof, take them to a yoga class, or lead them into any healing environment of intentionality and consciousness, they do so in hopes they will open the door to a healing that has deeply affected us. “Asana is a sacred offering,” wrote Iyengar.  It’s a sacred receiving too, where we embody asana, mobilize prana, surrender cares, and focus the monkey mind. By our receptivity to the pure consciousness of healing yoga brings us to the heart’s temple, the golden womb of the unmanifest where matter and consciousness meet, greet, and open for us the realm of healing. The prescription is simple: Get to a yoga class.     Referenced: Stephens, M. (2010). Teaching yoga essential foundations and techniques. Berkeley, Calif: North Atlantic Books. [Free ebook] Stop worrying whether you’re doing a pose right, or if you are doing something that will eventually require a few trips to the emergency room. 🚑 Download our free yoga form guide — over 50 yoga poses broken down with pictures.

Copy and paste this URL into your WordPress site to embed

Copy and paste this code into your site to embed