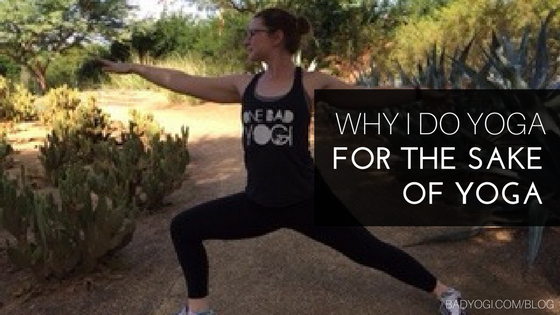 Why I Do Yoga for the Sake of Yoga

There are, of course, many differences between female yoga practitioners and their male counterparts. But there’s one in particular I’ve noticed just recently.

It basically comes to this: ask a woman why she does yoga, and she’ll generally talk about, well, the benefits of yoga.

Ask a man the same question, and you’ll usually get an answer like, “I do yoga because it makes me better at [blank].” The “blank” can be anything from surfing to basketball to rock climbing to, well, you get the idea.

Often the answer comes in several parts; for example, “Yoga helps me get more flexible for skateboarding, and more focused for my distance running.”

Now, there’s nothing wrong with this; in fact, it’s great. I find it interesting to see what different paths people take to arrive on their mats.

An aside: one of my teacher training tribe-mates (a woman) recommended a book to me: The Yoga Man(ual) by Jen Murphy. And it’s very upfront about saying, “Think of yoga as a complement to any sport.”

It’s also peppered with quotes from hockey, skiing, and surfing professionals, as well as an ultramarathoner.

I get it: your average middle-aged yoga guy isn’t as exciting to read about as, say, a pro snowboarder. (So if you’ve read this far, I thank you!) And, to be fair about the book, the author did interview at least one likely desk jockey – a Google marketing guy, who didn’t mention anything about alternating yoga and CrossFit.

It’s good to know that if I take up kickboxing or something, doing yoga can’t possibly hurt. In the meantime, though, yoga is (more than) enough!

Over to you, yogis! Do you do yoga to complement other activities, or are you into yoga just for the sake of yoga?