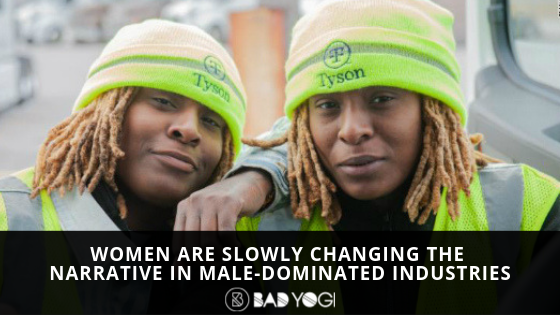 Women Are Slowly Changing the Narrative in Male-Dominated Industries

In recent years, women have made it a priority to prove to themselves (and all the doubters out there) that they can do anything, anywhere. This includes working in mostly male-dominated industries, doing grueling work and proving that being a woman doesn’t mean that you can’t do a job that’s labeled as “men only”.

The more, the merrier

More often than not, women are discouraged to pursue certain jobs because it’s still presented as a job for men by many companies. Just think of the mining industry, construction work, and engineering. The list goes on. How does one solve this problem? Well, the term “the more, the merrier” applies here. The more women who enter male-dominated industries, the better – and it’s happening slowly but surely.

A great example of women diving into male-dominated industries head-first must be the story of two twins who are owning their job as truck drivers.

Asia and Mahogany Scroggins are an all-female super team. At only 23 years old, they’ve been making their mark in the truck driving industry. According to CNN, they both work as truck drivers for Tyson Foods and share a truck on cross-country hauls. One of them takes the day shift while the other takes the night shift. They give their father, who was also a driver, the credit for their career choice. Their mother was initially quite nervous about the idea because working in the trucking industry requires you to be emotionally strong. You are away from your family and friends constantly and it’s pretty grueling work. Asia and Mahogany work long hours and many of those hours include night shifts. They didn’t let that stop them though. 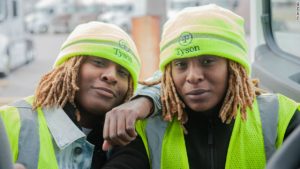 Taking care of each other on the road is at the top of Asia and Mahogany’s to-do list.
Image: Tyson Foods

The twins find their work enjoyable – not only because they’re following in their father’s footsteps, but also because they know that they’re part of making these kinds of industries more accessible to women. According to the Institute for Women’s Policy Research, females make out less than 5% of truck drivers. It would be great if that could change.

Elizabeth Skidmore, who is an organizer at the New England Regional Council of Carpenters, says that in order for more women to start working in male-dominated industries, the world has to see more women doing the work. Even the images used by companies in their ad campaigns can give people an idea of whether it’s a workplace for men or women. Unfortunately, there are also many socialized ideas about the type of work men and women are supposed to do, which leads to many women never being exposed to careers that are traditionally masculine. Skidmore says that young girls should grow up knowing that they can do whatever they want, that there are no limits, that they are free to drive a truck if that’s what they want to do.

“I think most girls growing up are not told ‘You could drive the big crane, you could drive a backhoe, you could be the ironworker hanging up in the sky putting skyscrapers together.’ Then in high school, the older girls get, the less someone is talking to them about this stuff, and so part of what we’re trying to do is get these images out there.”

It is true that there are many women who want to work in male-dominated industries, but fear is holding them back. Many of those fears are justified. Ariane Hegewisch, who works at the Institute for Women’s Policy Research, says that many women shy away from working jobs that involve night hours or solo work because these things make them more vulnerable toward sexual harassment or predation. She adds that going out and doing the work is the only way to learn and this means that women need to depend on the respect and professionalism of their mostly male coworkers. This is where it gets tricky because, as we all know, this is not always the case.

Hegewisch adds that a lack of information about how to apply for these kinds of jobs also leads to fewer women entering these industries. The good thing about women starting to work in male-dominated industries is that they learn how the process works – they can help other women to apply for these jobs and prepare them for interviews.  They can give their fellow female employees a voice and in turn, more women can enter the industry, which will help to balance out the advantage men have in these kinds of jobs.

When Asia started out as a truck driver, she had the pleasure of apprenticing under a female truck driver who’s been doing the job for 40 years. She says that the mentoring she received from this woman was essential to prepare her for the job ahead of her. Asia also grew very fond of her mentor, which just goes to show how beautiful relationships can develop in the workplace when women help one another. Asia says she calls her mentor Mama Bear, because she’s very feisty.

“The first thing she said when she met me was, ‘We may cry, we may laugh, but we’re going to make it through this.”

Having each other’s back

We can vouch for those Doritos, in fact, if any of us were truck drivers we’d be having a picnic all day, every day. You can’t drive without snacks. That’s just crazy.

Women can do anything they put their minds to

Needless to say, the twins love working together and they are excited to have the opportunity to show other women that this occupation is something they can step into if they want to. According to Mahogany, more women will be encouraged to join male-dominated industries once they know that there will be people looking out for them.

“Every day, I meet at least one lady who is interested or she’s a driver and she’s saying ‘I’m glad to see you guys out here.'” 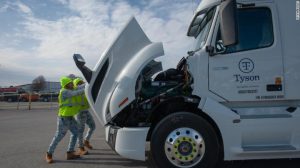 There’s strength in numbers – Asia and Mahogany are proof that women can thrive in male-dominated industries.
Image: Tyson Foods

Having someone tell you that you’re an inspiration always feels amazing. Not only are Asia and Mahogany enjoying a job that is still male-dominated, but they are also paving the way for many women to follow in their footsteps. They are showing women that it is possible, that you can make your mark, and inspire others to follow their dreams too –  no matter how crazy or unconventional that might be.