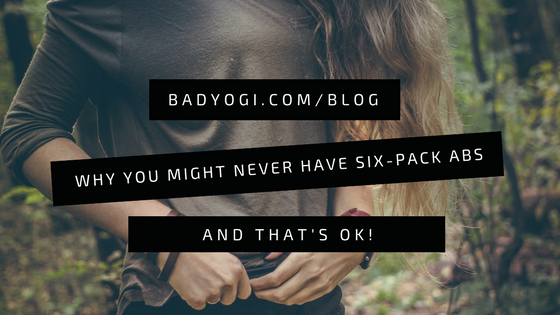 Why You Might Never Have Six-Pack Abs (And That’s OK!)

But I recently saw a Facebook post that made me realize we still have a lot of work to do.

It was innocent enough. A woman was asking for advice on how to get six-pack abs, and several women responded with encouragement and tips.

But not one woman asked why she wanted six-pack abs. No one asked if she was otherwise healthy and happy. And no one told her it’s okay if she doesn’t have six-pack abs.

As someone whose arch nemesis is her abs, I totally understand the fixation. I’ve lamented the seemingly non-existent effects of all my yoga, running, HIIT workouts, and strength training.

I’ve questioned every single morsel of food I eat. I take probiotics. I eat fermented foods. I avoid carbonated beverages. I don’t chew gum. And straws? Our relationship ended years ago.

Pretty much everything you’re supposed to do to have a “toned core,” I’ve done. But I still have a little more fat on my tummy than I’d like. I’ve stood in the mirror, pinching and squeezing, defining my self-worth by my stomach’s size.

(My boyfriend, on the other hand, thinks I’m in incredible shape. We’re our own worst critics, after all.)

I wish every woman knew she might never have six-pack abs. And I want her to know it’s okay.

Every body is different. We all have genetic predispositions and body compositions that might make it easier (or harder) for us to get a rock-solid core. It goes back to the idea of bio-individuality. Just like you swear by Bulletproof coffee, I might worship maca. What energizes one woman might make another feel exhausted.

And we all carry fat in different areas. Your hips might be that spot for you, while my abs are definitely it for me.

I know you might not want to hear this, but women need body fat. Especially if you plan on having kids. A body fat percentage between 21% and 32% is considered ideal. But you probably have to be in the 15% to 17% body fat range to see any ab definition. This also happens to be the range where you might notice your period goes missing. Whoops.

We all think of six-pack abs as the epitome of health. We’ve seen the image splashed on countless TV screens, magazine covers, and billboards.

But it might not be as healthy as we think. Especially for women.

Many women who have trained heavily (like Olympic athletes or distance runners) look like shining examples of health on the outside. But some have started speaking out about how unhealthy they’ve become. They don’t get their periods anymore. Their hormones are all out of whack. They’re stressed out and anxious.

By now, you probably know that you can’t really spot reduce either. You can do all the crunches, planks, and Turkish getups you want. But you have to reduce overall body fat to give those abs a chance to start showing.

And then you might risk reducing your body fat too much and find yourself prioritizing a societal ideal instead of your health and how you feel.

At the end of the day, the most important question to ask yourself is whether your quest for flat abs is for you or for someone else. And why you think you need to have a six-pack at all.

There’s a huge difference between having a strong core and sporting a vanity six-pack.

My guess is that, sadly, the ultimate driver for most women (myself included) is seeking approval, self-confidence, and self-worth from a world that tells us to accept ourselves. But only if we’re a size zero with killer abs.

Have you fought for six-pack abs to no avail? How are you working on loving and accepting your body just as it is right now? Share with us below!