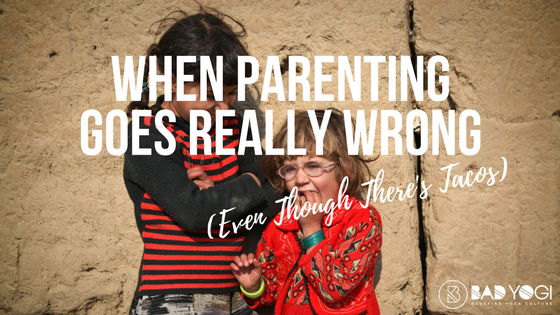 When Parenting Goes Really Wrong (Even Though There’s Tacos)

And I got it so wrong yesterday.

I have three kids.

The big one. Nearly 11, boy. Likes Jedi Academy books, books about mythology, dragons, Minecraft, Clone Wars, has Asperger’s, likes the trampoline, is hilarious without knowing it, is a wonderful helper. Sometimes.

The littlest one. 6 months, girl. Likes me. And her brothers. And her dad’s beard. She doesn’t like the car.

They’re all particularly adorable when they’re sleeping. We do need to remember that.

I start most days with the positive attitude that ‘Today I’m going to get it right’. That today my kids will eat healthy treats, not scream at me or each other, have some wholesome outdoor fun, be creative, get reading/read to, help, be kind and love each other.

I also think that I will be calm, rational, zen, non-attached, not shouty, not anxious, not on any screens, approachable, healthy and pretty much everything that yoga is supposed to be and do and I will be the embodiment. Om!!!! I will practice when the little ones are having a nap, I will do my Yoga Teacher Training homework after I have practiced and while the little ones are still napping. My big one won’t watch two hours of Netflix on his iPad (#schoolholidays) while the little ones are napping and I’m preoccupied with doing all the yoga and all the homework.

The laundry will magically wash, dry, fold itself AND get put away. The dishes will be done. And I will get to cook a fabulous dinner that everyone will eat and we will sit around our table and laugh with each other because we are a loved-up family that loves, loves, loves each other.

Some days, some of these things happen. Kind of.

Yesterday, all of the things, went wrong.

I woke up with the same attitude. But it was hot. I’m in Melbourne, Australia and it’s cold here when it’s cold and it’s stinking hot here when it’s hot. It was medium hot yesterday, but babies don’t get medium hot. They just get cranky. In order to deal with the cranky, we all had some sugary treats (except the littlest one, she did, however, have some watermelon, which to a baby is pretty much the same thing). So the babies didn’t/couldn’t nap on time. Then they all started screaming because they were over tired. And coming down from the sugar rush.

The big one wanted to watch/play screens before the little ones were asleep. Screens to my two year old are like an addictive drug. I said no, and then the big one went off on a whiney pre-teen tantrum about how it’s all about the little ones and no he won’t help me fold the laundry. Why should he?

I head towards shouting, tell him fine, do what you want. You want to be in your room. You need time away from us, then go! Take your iPad and go! Shut the door, we’re going to the shops after these two wake up and you can stay or come, whatever, do what you want. I’m done arguing with you.

Guilt trip Queen, which was originally my mother’s title, is now living at my house.

He still didn’t help me with the washing.

They cancelled last minute, totally bumming out the 11 year old who’d been looking out the window waiting for them. Not cool. The 2 year old had been waiting to go in the pool too, so they both went. The baby didn’t want to go in the pool. It was too cold. She wanted to breastfeed and cling to me even though that made us all hotter and sweatier and stickier.

My partner came home from work. He’d had a rubbish day and just wanted to have a nap on the couch. The kids were not having it. He ended up having a water fight with them and the water pistols until the middle one cried.

Then my dad called because my mum got admitted to hospital. She’s ok. But not. It’s her knees. And her weight. And her mental health. And her insulin dependent type 2 diabetes. And she’s in pain.

I get all angsty and worried. And know I can’t do anything. She has to want to fix herself. I can’t fix her. You can’t want something more for someone than what they want it for themselves. Blah Blah Blah. It’s my mum. And I’m not not attached. And I’m mad at her for not taking care of herself. And I’m mad at myself for feeling like I spend so much time being mad at my mum.

And then my partner needs a lie down. And the middle one is getting hangry. And lately the littlest one has decided that 5pm is the best time for a big, big feed and a nap. Just a wee nap, mind you, 25 minutes at the most.

And I start to just hate everybody.

So I get the littlest one to sleep, my partner lies on the couch and I lie her on his chest. I get to making tacos (everyone’s favourite!) and homemade salsa and skillet corn. But I haven’t got any avocado and I just want to scream.

I don’t scream. Yet.

At the table, everyone’s in a huff because I huffed my way through cooking dinner, the big one huffed his way through setting the table. The littlest one slept for 8.4 minutes, so my partner had 7.1 minutes sleep. The middle one is about ready to kill everyone with murderous hunger rage until he gets into his high chair.

We load him up with all the things. Meat, frijoles, corn, taco shells, salsa, cheese, sour cream. He keeps pointing at everything and saying ‘More’. He eats one corn kernel and maybe a tablespoon of sour cream. He gets food all over the place. The littlest one eats some corn. Gets all the rest over everything else.

The middle one cries.

My partner looks weird. He remains calm. Picks up the middle one and puts him and his salsa’d blonde hair into the shower. He cries because he doesn’t want a shower, he wants a bath. He runs out of the shower and slides on the tiles. Falls over. Cries.

The littlest one cries because her brother is crying and I’m trying to eat some dinner. Without her on my lap.

The biggest one doesn’t want any salad.

My partner takes the middle one to the bedroom to read books. I can’t deal with the crying so I put the littlest one on my lap while I finish eating my dinner. We then have a struggle fest of me trying to get her to eat her own damn corn/frijoles rather than reaching for mine which is covered in chipotle hot sauce.

I give up and get the littlest one cleaned up and in her pyjamas. Then I give her to the partner and middle one to entertain while I tidy up the now disaster that was my dining room table/carpet. My big one has ‘helped’. He put the jalapeños back in the fridge.

Now I definitely hate everyone.

I huff my way through tidying and picking up tiny bits of God only knows out of the carpet (we’re in a rental, WHOEVER thought that carpet in the dining area was a good idea are completely insane). I stack the dishes, wipe down the high chairs. Have a glass of water. Wipe the dining room table. Have an internal cry with my head on the timber, it’s too hot for real tears and I don’t actually think I have the energy anyway.

The biggest one comes into the kitchen and says, ‘My bed needs to be made.’

I’d taken advantage of the warm weather, washed all his sheets and duvet. I’m an idiot.

I shout, I stomp. I tell him he could use his manners. I’m not a doormat. I swear, not at him, in general, but still not cool. My partner comes out and doesn’t know why I’m so angry. Do I not feel respected? I can’t find his other sheets. I can’t be bothered going out to the washing line.

Everyone gets scared and flees into other rooms of the house.

I apologise. And make his bed. He pats me on the back and says it’s ok.

At some stage, like around 10pm, even in the heat. Everyone falls asleep. My partner in the middle one’s bed. The middle one in with me and the littlest one. The big one in his freshly laundered sheets.

I couldn’t find the cat.

I had a drink of water.

I’ll be better tomorrow, I say…

This morning the big one read books to the middle one. Then made him some porridge for breakfast while I fed the littlest one.

We went to visit my mum in hospital. I got cranky at her and she got cranky at me. When the doctors told my mum something she wasn’t ready to hear, she got teary. The middle one tried to give her some rice crackers from his lunch box to make her feel better.

I’m writing this now while the little ones are napping. The big one has already watched about 2 hours of Netflix on his iPad. My partner isn’t home yet.

The rains came today. It’s still warm but wet out. The windows are all open and it smells like grass.

I’m teaching a yoga class to a bunch of friends in the morning. In the park.

I must be doing something right.

Wow, they’re adorable when they sleep.

Have you ever had a day like this, fellow parents? How do you handle the stress so you can have a better day tomorrow?

Sam writes, mothers and teaches in the Bayside area of Melbourne, Australia. She loves living near the beach and tries to teach yoga by the sea as much as possible. She is currently completing her Yoga Teacher Training course and is equally obsessed with coffee, tattoos, camping and cooking. One of her favourite pastimes is drinking red wine while watching Game of Thrones.