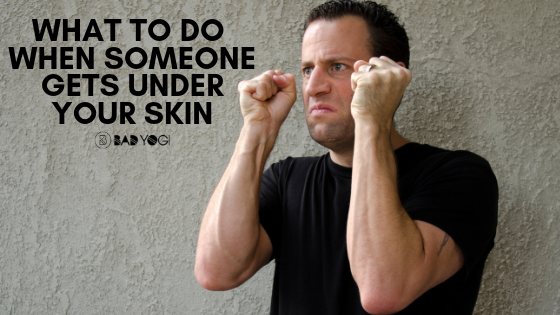 What To Do When Something Gets Under Your Skin

As human beings, 90% of our time is spent in one of two moods:

1. “Namaste. Nothing can break through this force field of peace surrounding me. I am one with the universe; the mountains, the lakes, the flamingos, the hyenas. Social media does not matter to me. I survive only on rabbit food and gluten free crackers. I radiate positive energy at all times. I’m growing my own avocado tree in my backyard.”

2. “I will literally karate chop in the throat anyone who so much as bumps into me. Nothing ever works out for me. I should have a big L on my forehead for ‘loser.’ People are awful and I’m considering retiring as a hermit. Chicken nuggets are life. I’m so tired. I want to stay in bed all day and watch re-runs of The Nanny.

When negative energy takes hold, it’s as if it physically enters your body and you can’t seem to get rid of it.

Something Is “Under My Skin”

What exactly does it mean when someone or something has gotten “under your skin?” Generally, it’s used in a negative sense, to imply someone is a source of irritation for you. A lot of times, someone will negatively affect us so strongly that we think about them long after they’re gone; the negativity has infiltrated our body like some kind of virus and much of the day seems to go downhill faster than an out of control roller blader.

My Time In Retail

My weekend job, which pays a lot of my bills (until I become the next Joan Didion,) is at a giant clothing store. For legal reasons I can’t name it, but lets just say they’re from Ireland, known for cheap shit made in places like Bangladesh, and it’s a huge mess (a mess so big, I sometimes fear I may suffocate under all the faux leather leggings and basic t-shirts.) Being that I live in Netherlands with my Dutchie, I have to speak Dutch at my job, and I end up with some pretty pissed off customers when I don’t understand what the hell they’re talking about. A language which requires me to make a phlegm sound isn’t easy to learn, but people don’t cut me much slack. Apparently, I should be fluent after a year. Go figure.

Last weekend I had to go get a ladder from the storage and climb up to the top, stand on my toes, and shimmy jeans off a mannequin for a lady who didn’t even buy them. She acted rude, arrogant, and condescending. That Lily Allen song “Fuck you” usually pops into my head on occasions like this.

There are days while working in customer service when I can let these things go. I walk around in a state of calm serenity, feeling like a Buddhist Monk, pouring love on to everyone and everything, even those that don’t seem to deserve it in that moment. But, other times, it just brings me down. It literally feels like that negativity has crawled under my skin, moved into its own permanent apartment and started buying furniture for it from Ikea.

Why Do Negative People Affect Us So Much?

Everyone is different and we’re all affected by some negative things more than other people. We all come with our own unique baggage, and sometimes we hit other people in the face with that baggage, very, very hard.

When something another person does or says gets under your skin, the easiest thing to do would be to get angry and cry, yell, throw things, stomp your feet and shake your fists at the sky, pissed off at the universe. But, why not ask yourself some questions and get to the root of why this negative energy has eaten away at you.

For example, when a customer is rude to me at the cash register it makes me feel belittled and unimportant. At the root of this, is my embarrassment at not being as successful in my writing career as I would like to be by now.

What Can You Do When Something Gets Under Your Skin?

1. Detach from the person or situation

Hard as this may seem, one of the only ways to keep negativity from getting under your skin is to stop it in its tracks. The second that rude comment or that irritating situation starts playing on your mind, immediately turn into Jackie Chan and karate chop that energy out of the way before it can even touch you.

2. Replace it with positive energy

When something is really getting to you, and you weren’t able to detach from it quick enough, replace that negativity with a positive memory. Think of something that makes you happy, like one of your favorite memories.

Negative energy can easily get under you skin if you allow it, but cutting this off at the source is what will really make a difference in your life and the lives of those around you.