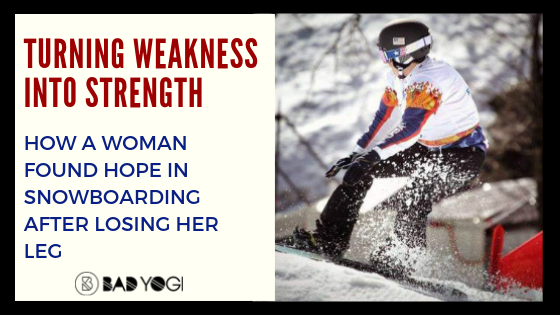 Turning Weakness Into Strength: How a Woman Found Hope in Snowboarding After Losing Her Leg

There’s a quote that says the only thing we can be certain of in life is change. That proves true in so many instances but as human beings, we tend to be resistant to change. Sometimes life forces change upon us and in the end, it is the way we choose to deal with it that defines us.

Megan Harmon proved that the way we deal with hardships can change everything when she lost her leg in a motorcycling accident in 2009. CNN reports that she was making her way down the highway right after getting it back from the shop when a driver of a nearby car didn’t see her and drove right into her leg. It broke in several different places but doctors were hopeful that they could save it. Then a blood clot formed in Harmon’s foot. Doctors tried everything they could to save her foot, but couldn’t and had to amputate it. Because she had so much nerve damage in her leg, they amputated it just above the knee, leaving her with only one leg to live with for the rest of her life.

Harmon took those lemons and made some majestic lemonade

Harmon was not about to let her newfound disability slow her down. She went ahead and got her first prosthetic just four months after the accident. Within two weeks, she was walking around with her “new leg” unassisted. Looking back, Harmon says that she thinks she managed to make progress so fast because she was trying to be strong for her family. She could see how upset they were by what had happened to her and wanted to do everything she could to ease their pain. “I kept telling them, ‘It’s going to be OK. I’ll be that cool girl with a robot leg.'” She did indeed manage to turn into that “cool girl” pretty fast, but after the hustle of rehab was over, she found herself with a lot of unprocessed emotions. This led to a year and a half of bad depression. 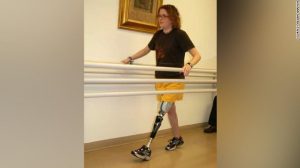 Harmon’s family helped her pull through. Her father had introduced her to skiing at a young age and she fell in love with it. As we all know, sports can do wonders when you’re feeling down in the dumps. After the accident, Harmon’s father found out more about the adaptive sports programs that are run by the National Ability Center in Utah. In the winter following Harmon’s accident, he signed her up for a week of lessons. As it turns out, it was the best possible thing anyone could’ve done for her.

Even though Harmon loved skiing as a kid, doing it with a prosthetic leg made it way more challenging. She recalls trying it during the week her father signed her up for but found it absolutely terrifying. Still, she did not let her fear stop her or gave up just because a prosthetic leg made things harder. She decided to try snowboarding instead. It was something she’d always wanted to do and the adaptive sports program presented her with the perfect opportunity. 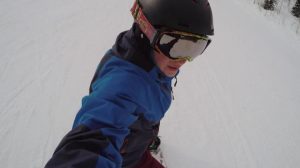 Harmon discovered a love for snowboarding and soon became a champ.
Image: CNN

It turns out that snowboarding was Harmon’s true calling. She switched to a specialized prosthetic and being more comfortable on the snowboard, she was soon kicking snow in the faces of able-bodied riders. For Harmon, snowboarding is the one thing she can do where her disability doesn’t matter. “It’s something that I can do just as well as everybody else. I don’t feel disabled when I’m snowboarding. I’m better and faster than a lot of other people on the mountain,” she says.

To the Paralympics and beyond!

Harmon’s love for the sport led her to move to Utah full-time in 2012 so she could train and compete. Now she has raced all over the world in places like Chile, Spain, Canada, and Finland. She even represented the United States at the Paralympic Games in Sochi, Russia in 2014 – her biggest accomplishment thus far. Harmon still can’t quite believe that she managed to do that. “Ten, fifteen years ago, if you told me that I was going to be at the Paralympics, there’s no way I would have believed you. I don’t think I would have ever expected my life to turn out this way.” 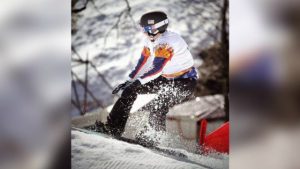 It’s pretty amazing how Harmon’s disability propelled her into becoming the best possible athlete she could be, something she wasn’t even considering before the accident. She’s gotten so good that she is now competing with Team Utah, an able-bodied snowboard squad. Harmon says that competing alongside them encourages her to push herself a bit harder, because the people on the team are faster and more agile than she is.

An athlete with a brain for rocket science

Harmon, however, is not just an expert at navigating snowy slopes, but she also has a brain for rocket science. Her day job consists of working for a company that makes rocket motors. She absolutely loves it, saying that it’s a challenging job that really requires you to use all your brain power. Clearly, challenges are what make her tick.

Living and loving life, despite obstacles

Harmon is living her life to the fullest – it might be safe to say that her disability only encouraged her to be more alive and really go for the things in life that make her feel happy and content. Harmon’s philosophy is simple: she pushes herself physically and mentally on a daily basis and this helps her to maintain her edge and be that “cool girl with the robot leg”.

Obstacles in life are inevitable. Bad things happen, and there’s nothing you can do about it, but you can control how you react to them. That is what’s most important. In life we always have a choice: wallow in self-pity or get up and go show the world what we’re made of. Harmon showed everyone that your disability can become your greatest strength. The curve balls life throw your way can be turned into amazing opportunities – it all depends on your reaction to it.