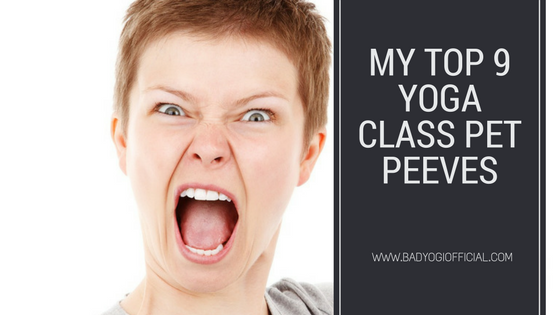 In my 6 years of being a yogi I have practiced various kinds of yoga at numerous studios, but no matter where I go the same things always seem to get under my skin. Now, as a “yogi” I don’t mean for this post to come off as rude, but yogis have pet peeves too. Bad yogis, can you relate to any of these yoga pet peeves?

I’m all for self-expression BUT, guys, if you are in down dog and your junk is hanging out of your shorts, that is NOT cool. And ladies, the last thing anyone wants to see is a nip slip mid forward fold. Also, wear underwear, because your leggings may be more see through than you think. Yes, you are supposed to be focusing on yourself, but some people’s clothing(or lack thereof) can be totally distracting. And it may not be inappropriate, but please DO NOT wear socks. I can’t.

2. Phones in the studio/on your mat

Even as a millennial who loves her phone, never will I EVER have my phone with me during yoga. Nothing is worse than when you are lying in savasana listening to the teacher and you hear a phone vibrate, or RING. I cannot think of anything more disrespectful than disrupting other students by having your phone go off during class. The only exceptions I can understand are if you have a job where you are on call or maybe if you have children, but honestly, phones should nama’stay out of the studio.

I’m a chatty gal, I love to talk to people before and after class, but during class it makes my blood boil. Once during class a woman tried to engage me in a full blown conversation, I was HORRIFIED. Nothing can ruin the mood of a class more than people talking over the teacher or in class in general. I get a remark or two when a teacher is demonstrating a pose, which is fine, but know where to draw the line. It’s rude to the other students in the room and the teacher if you continuously talk during a class.

Nothing makes me more uncomfortable than when someone’s Ujjayi breath turns into sexual noises. No one should ever sound like they are orgasming in a yoga class. A grunt here and there, a noise of frustration, breathing techniques, but moaning just makes everyone feel awkward.

You were in this class for 70 minutes…and you can’t spare 5 more? You’re lying there, letting go with peaceful music playing, and then THAT person gets up and tries to make a “quiet” exit but actually knocks over your water, dropping a block, and slams the door shut. If you don’t have the time to dedicate to the WHOLE class please spare everyone the annoyance of you “sneaking” out early.

Yoga is a personal practice, and yes sometimes we all sneak a glance at that person doing a cool handstand variation, but ogling distracts you from your own practice. There have been so many times where I am struggling with a pose or holding a difficult pose and I can feel or see the person next to me watching me intently. Unless you’re watching a teacher demo, keep your eyes on your own mat for the benefit for everyone’s practice.

Doing poses that are completely different than what the teacher is cueing is distracting, rude, and can also be potentially harmful. A teacher creates a certain sequence for a reason and unless you are modifying, enhancing or coming into a quick koundinyasana on your way to plank, stick to what the teacher is saying.

8. People who breathe on me

I know I know, breath is a key component of yoga and I am all about it until I feel the person behind me breathing on my neck. Classes build up enough sweat without feeling someone else’s warm breath. Personal space, people.

Leave any strong perfumes, deodorants, essential oils, etc, at home. One time I was in class and a person next to me WREAKED of marijuana, as if they had just smoked before entering class. It should go without saying that first shouldn’t be doing yoga high, and second no one wants to smell that for the entirety of a class. Throw on some deodorant (please) because B.O isn’t pleasant, but leave all other smells at home out of courtesy for everyone.

Just because we are yogis, doesn’t mean things in the studio can’t grind our gears! So yogis, if you do any of these things, please, stop. And if you’re like me and have been secretly holding all of these pet peeves in, know you aren’t alone! What bugs you when you’re just trying to enjoy your damn warrior 2? Let us know in the comments!

Olivia Beaton is a yogi, blogger, margarita lover, and grilled cheese enthusiast. She is a Cape Cod native who loves the beach and is always chasing a good sunset. Olivia is currently a journalism student at Hofstra University and enjoys adventuring around Long Island and NYC with her camera and yoga mat in tow. Her yoga practice started at the young age of 15 and since then she can’t nama’stay away. When not practicing yoga she enjoys reading, jamming to rap music, and doing whatever the f*ck makes her happy.