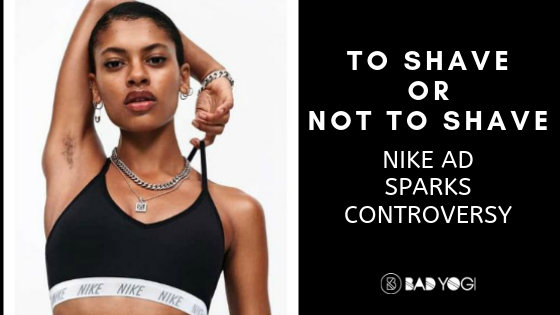 To Shave or Not to Shave: New Nike Ad Sparks Controversy

Just a few months ago, a Chinese model received a lot of hate after showing off her freckles in a Zara ad. This sparked a lot of conversations about how society still has some ways to go when it comes to the beauty standards that are applied to women. Flash forward to the present, and there’s another ad that has sparked a debate for very similar reasons. This time, a model advertising some new Nike sports bras is getting a lot of flak for showing off her underarm hair. Really?

Today reports that Nigerian-American singer Annahstasia, who is proudly showing off her underarm hair in the latest Nike ad, is getting a lot of hate, with some Instagram users calling her underarm hair “so nasty” and “disgusting”. Well, excuse us, but what exactly is “so disgusting” about a woman’s underarm hair? For those who didn’t know, yes, we do have it and yes, we do usually shave it. Why? Well, we actually don’t really know. To be quite honest, most women would allow some fuzziness, especially when the winter months roll around and there are no shorts or tank tops in sight. Why shave when no one can see the hair? Better question, why is it okay for guys to walk around donning body hair but women have to adhere to the unwritten rule of shaving off all body hair in sight? When you start to think about it, it seems quite ridiculous.

Some comments were downright nasty

The comments that followed Nike’s Instagram post were divided – some said that while Annahstasia looked pretty, she was in need of a shave, while others were downright nasty: “Pretty good but tell her to shave,” one user said. Yahoo Lifestyle reports that some comments got pretty ugly, with one user saying, “O dude, this is not freedom this is not a type of ‘i love my body,’ this is bulls**t shave that s**t.” This comment garnered more than 1,500 likes. Another commented, “For f***sakes, shave your damn pits. This is DISGUSTING.”

Others said that sporting underarm hair made women unattractive to men. Well gee, guess then women shouldn’t be attracted to men either. The saddest part of it all is that there was one woman who commented, “The only good thing about this is that the rest of us who still shave and wax will have more men around.” Last time we checked, women didn’t exist to please men and there’s no proof that women who shave are more attractive than those who don’t. Also, why do some of us still feel the need to bring other women down for just being themselves?

There were those who supported (and appreciated) the initiative

Luckily, the comments weren’t all nasty and there were those who applauded Annahstasia for keeping it real, with one user commenting, “Guess what: women are human beings. We can do whatever we want with our bodies…We don’t have to live up to anyone’s expectations except our own. Nike, love it.” Another took to the comment section with all caps blazing: “STOP DEGRADING HER JUST BECAUSE SHE HAD BODY HAIR! YOU DONT SAY THE SAME ABOUT MEN WITH ARMPIT HAIR. HER BODY HER CHOICE.” Damn right. There were also users who argued that the expectation of women to be clean-shaven is just a marketing ploy from the beauty industry. “Sorry to say but shaving under the armpits was pushed by marketing to sell more razors. It is plainly a social construction. And instead of imposing your views, you should respect your fellow humans,” one user wrote.

There were also people who were simply confused by all the fuss, saying that it was much ado about absolutely nothing. “It’s simply hair on a body. Female or male doesn’t matter. It’s just hair,” one comment read. Another said that all the hate was unnecessary and that the photo was beautiful and that she loved the bra and the model’s confidence: “No one is forcing anyone to [look like] anything.. she’s just a model that has armpit hair. I think this beautiful woman deserves more love… the hate is unnecessary,” she wrote. We couldn’t agree more.

Donning body hair is your choice

The Nike ad actually couldn’t have come at a better time – Yahoo Lifestyle reports that there is currently a growing “au natural” movement in which women are opting out of shaving their body hair. For many, it’s a form of protest against the mainstream beauty standards women are subjected to. Celebrities like Amandla Stenberg and Lourdes Leon are supporting this movement and have been seen strutting their stuff on the red carpet, body hair and all. This isn’t an entirely new initiative – way back in 1999, Julia Roberts appeared on the red carpet with unshaven underarms and in 2003, Britney Spears did the same. 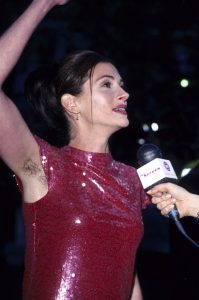 Julia Roberts made history when she flaunted her unshaven underarms at the London Premiere of “Notting Hill” in 1999.
Image: FilmMagic

According to Today, there’s actually a movement called “Januhairy”, which aims to change these specific kinds of stereotypes. It encourages women worldwide to grow their body hair as a way to embrace their natural look and to raise money for charity – and let’s not forget the #freeyourpits movement that took the world by storm in 2014. Women have been trying to accept their bodies, hair and all, for quite some time now. 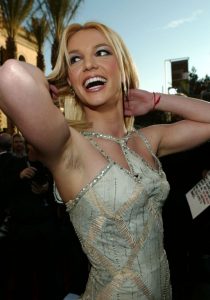 Whatever you say, make sure it’s kind

Sporting your armpit hair with pride is definitely not for everyone – and that’s totally fine. There’s a time and a place for everything, but one thing that needs to change is the way women who defy sexist beauty standards are treated. Those brave enough to challenge the status quo should be celebrated, not torn apart on social media. If you don’t like it, that’s all good, but there’s no need to trash people for defying beauty standards. If what you want to say isn’t kind, don’t say it. It’s as simple as that.

What are your thoughts on this? Sound off in the comments!