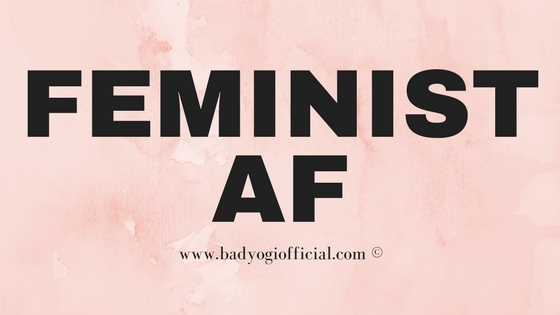 You may have heard by now that a yoga teacher by the name of Eric Shaw wrote a takedown piece directed at women a few days ago, and not surprisingly, the world has not taken kindly to it.

This was one of the most embittered, arrogant, insulting, and grossly misinformed opinion essays about Feminism I’ve ever read. Essentially he takes the entirety of women’s history and summarizes it into one main idea: women have been around for as long as men, and why is it “just now” that we’re looking for equality? Where were we in generations past where the work was “harder” and men were the ones suffering to provide for their “whiny,” “parasitical” lesser halves? He also questioned the contributions women have made to the world when he asked, “How many woman have started a company from scratch depending only on the grit of herself and other women to build a massive corporate edifice of the likes of Apple or Microsoft or Ford that kicks butt everywhere on the planet?”

Has this man never heard of Oprah Winfrey, one of the most prolific, influential self-made billionaires in this world? There’s more self-made female billionaires in China than I even knew about, and they conquered everything from real estate to pharmaceuticals. Elena Baturina of Russia made her billions in manufacturing construction materials and now works on building affordable housing. Judith Faulkner is the founder and CEO of Epic, a healthcare software company worth $2.2 billion. Jessica Alba founded Honest which is now worth over $1 billion even though everyone said she’d never be taken seriously. Or even Sarah Blakely, self-made billionaire of Spanx! And just for fun: did you know female CEOs head up General Motors, Hewlett-Packard, IBM, PepsiCo, Lockheed Martin, Mondelez, Xerox, Ross Stores, and SO MANY MORE? I have to stop here otherwise this essay will never end.

So please don’t try to tell me that women have never contributed anything noteworthy to male-dominated industries because that is patently false.

Shaw also asked, “Why didn’t they massively agitate in pre-modern times when society mainly needed bricklayers and miners and soldiers and blacksmiths and sailors and garbage men?”

You mean when we were considered half humans? When we were the property of the men we lived with? When we were denied basic education and human rights because “equal rights” wasn’t even a concept on the table? When we ourselves weren’t taught to believe we were worthy of desiring anything outside a husband to take us as one of many, and a litter of children? Are you blaming the victim of your wrong-doing for allowing herself to be treated as a slave? I’m sorry for the inconvenience women have caused you that it’s taken a moment for our collective awakening to kick in and shine light on the destruction your gender imposed on us for centuries.

But I don’t want to make the same mistake he does and ignore the suffering– present or historical– of another person. Have men suffered across history? Without question, yes. Have women suffered across history? Without question, yes. No matter who you ask, we can all agree that no member of the human race has been spared the wrath of our fellow man in our quest to grow bigger and better. We’ve seen the best and worst of ourselves. MLK said it well: “Human progress is neither automatic nor inevitable. Every step toward the goal of justice requires sacrifice, suffering, and struggle; the tireless exertions and passionate concern of dedicated individuals.” We’ve all been in the figurative arena for millenia, and we’re all intimately aware of the perils of battle, both literal and figurative. Knowing others have also suffered doesn’t make our own pain any less real. So the effort to make this a competition over who’s suffered more between men and women is a losing battle. The only thing that will ever achieve is fostering shame, resentment, and ultimately, division.

The funny thing is that this guy would have almost had a captive audience with me if it had been a thoughtful critique of modern Feminism. I consider myself a Feminist but not one that often aligns with the current expression of it. I think many times, we as women, feel we need to minimize or belittle men in order to empower ourselves; we still want men to dole out permission for us to stand up and be seen, heard, and understood. In other words, we want them to leave their seat at the table and give it to us, instead of simply getting out of our way and walking shoulder-to-shoulder with us on the road towards arranging a spot of our own. Sisters, we do not need to de-throne our men in order to have a place in the figurative court of the world; there’s a crown waiting for each of us and we have to step forward, claim it, and take a seat in our proper place– along side the many men with whom we can build alliances, share a mutual respect, and have constructive dialogue. No hierarchy, no competition, no bullshit. Am I being idealistic? I could see why you might say that and I don’t totally disagree with you.

The world we (most Westerners) live in today is uniquely primed for us to join the leading forces in any arena we choose. And the petty voices of the small minds of the few who disagree with our ambitions will be drowned out by the victories of the women already proving them wrong. So to the strong women spearheading this new era, and to the men who walk arm-in-arm with us, supporting our equal rights and fair treatment: March on, sisters and brothers. March on.

*** I’m also not immune to my innate privilege as a white citizen of the western world. I know a large percentage of the world’s women were not born with such an edge, and that gives me all the more reason why I believe I cannot hold this privilege lightly. This topic deserves an essay on its own, so forgive me for not delving into that directly in this one.