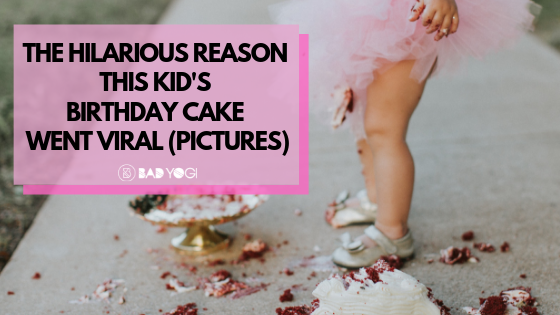 If you’re a parent, you know how important your child’s birthday is to you. When kids are still small, their parents tend to be even more excited about their birthday than they are – and they do whatever they can to make the day as special as possible.

According to Today, Melin and Dan Jones from Bonne Terre, Missouri, wanted to do exactly that for their 2-year-old daughter, Elizabeth. Her second birthday was coming up, and her parents wanted to make it as special as possible, so Melin asked Walmart to decorate a cake with the words “Happy Birthday Lizard”. Lizard is her and her husband’s nickname for Elizabeth. It sure is a nice gesture, but neither of them could have expected what happened next.

Jones went to pick up the cake from Walmart the day before her daughter’s birthday celebrations were to take place. Being in quite a hurry to get back home, she didn’t even really glance at the cake before she left the store. When she got home, however, she saw that the bakery had made one hell of a mistake. Instead of saying, “Happy Birthday Lizard”, the bakery had written “Happy Birthday Loser”. We don’t think any 2-year-old would find that amusing.

Not sweating the small stuff

Jones, however, wasn’t really in a state of panic. She took the cake inside, propped her daughter on a chair, and took a picture. The hilarious part is that Elizabeth looked completely gutted in the picture with the cake, even though she can’t read, so she had no idea that the cake said “loser”. Jones sent the picture to her husband and shortly after posted it on Facebook, but then took it off again for fear that the Walmart employee who was responsible for the mistake might get into trouble.

Jones, of course, wasn’t going to let the cake appear at the party where all the grown-ups could read it, so she went back to Walmart and ordered another cake, asking them to write “Elizabeth” this time around, just to make sure that no more errors occurred. She could have asked for a refund for the cake – Walmart bakeries are pretty lenient when it comes to their return policies, but Jones says that she didn’t have the heart to do it, especially because she didn’t want to get anyone into trouble.

Turning a mishap into a hilarious family memory

All this happened back in September of last year, but Jones recently decided to share the picture on Facebook again after she joined a group called Sad Sales. It’s a space where people post all sorts of retail flops. Jones, who says that the “loser cake” has become a hilarious family memory since, felt that no harm could be done by sharing the picture now. Little did she know that it would go viral soon after. Pretty soon members of the group requested that she make the image public so they could share it – and it spread pretty fast. By June 30, almost everyone had seen Elizabeth’s “disappointed” face looking at her birthday cake. Of course, the 2-year-old’s reaction led to some hilarious memes. 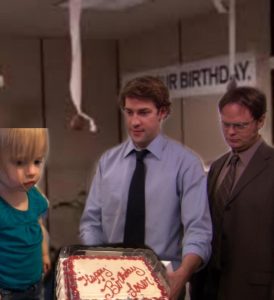 Many people found the situation hilarious, but some blamed Jones for giving the cake to Elizabeth in the first place, with one person commenting, “You shouldn’t have given it to her” and another saying “Looks like they made the cake for the [sic] you instead.”

People need to stop taking everything so seriously

Gee, do people always have to turn into the parenting police the second something doesn’t go perfectly in a child’s life? If Jones had made a huge fuss about it Elizabeth would probably not have been as blissfully unaware of the error on her birthday cake as she was and still is. Jones acted like an adult. Those who think that a massive fuss needs to be made about something as simple as a birthday cake with a message the kid can’t even read should really rethink the way they look at the simple things in life.

Jones says that she never told Elizabeth that the cake said “loser” and that she can’t read anyway, so she never knew. She didn’t even know that it was her birthday. Jones added that her daughter’s expression in the picture is pure coincidence, saying that she just “happened to be looking at the cake that way.” Hey, some of us have a resting bitch face, that 2-year-old has a resting “disappointed face”.

Everything worked out fine without any fuss

Elizabeth got to enjoy her new cake, with her real name on it, without any other mishaps. Jones says that the party was a huge success and that she has no idea how she will manage to top last year’s hilarious debacle, saying that this year “the pressure is definitely on”.

We don’t know about you, but we think it’s pretty cool that Jones turned something that she could’ve made a huge fuss about into a hilarious family memory. We bet Elizabeth’s going to look back at this in the future and have a good laugh. This just serves as another reminder to not sweat the small stuff in life. Elizabeth had an amazing birthday party surrounded by her friends and loved ones. In the end, isn’t that what it’s all about?