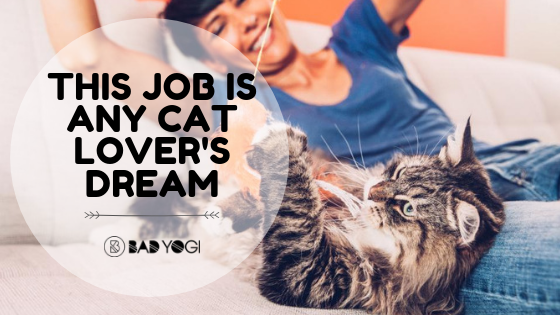 This Job Is Any Cat Lover’s Dream

Calling all cat lovers: there’s a place out there that might just have the job of your dreams. Do you often wish that you could take your cat with you to work, to the store, on vacation, and, well, everywhere? Well, we might just have found the perfect job for you. If all you want to do all day is to be surrounded by furry feline friends, God’s Little People Cat Rescue, located on the Greek island of Syros, might be your version of paradise.

Any cat whisperers around here?

This organization is not entirely new – it was founded in 2010 but was only officially registered in 2018. When they posted about a job opportunity at the sanctuary at the end of last year, it went viral. Many people thought that the job offer was a joke at first – Global News reported that the job posting specified that the sanctuary was looking for a “cat whisperer”. The candidate had to be someone over the age of 45 with “cat whispering skills” and knowledge of feline psychology. We’re pretty sure that this is no easy job, because let’s be honest, cat’s don’t allow you to teach or tell them anything if they don’t feel like it. So, if they’re not in the mood for your “whispers”, they’re not going to listen to you – you’d definitely need a lot of patience for this job, and of course, an undying love for cats.

The owner of the sanctuary, Joan Bowell, specified in the Facebook post that the person who got appointed would not only be a cat whisperer, but would also take over the running of the sanctuary. Feeding and caring for 55 cats and taking them to the vet when needed was also part of the job description. You’d be working about four hours a day and be paid accordingly. The successful applicant would also get free housing with the cats. Yeah, you would get to live with your feline friends. 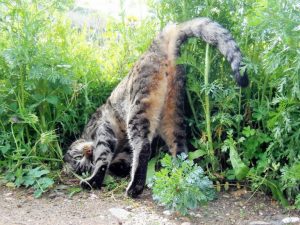 According to the sanctuary’s Facebook page, the number of cats has risen to 66. The sanctuary is funded privately, which means that resources aren’t always readily available, but they are doing what they can because they love cats. They feed strays and makes it their mission to rescue sick and needy cats. The sanctuary has a no-kill, no-cage lifetime policy. It seems that it’s about as much of a paradise to the cats as it is to the humans who live there. 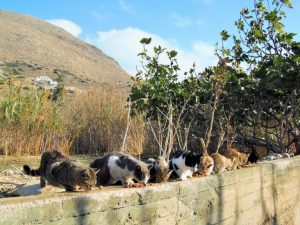 Some of the dumpster cats enjoying their meals.
Image: God’s Little People

The sanctuary also works in close association with the vets in the area, making sure that the cats are cared for properly when they’re sick. Just like all other sanctuaries, this one tries to find a loving home for as many cats as possible. Those who don’t find one get to live out their days at the sanctuary, as well as those who have a chronic illness and are therefore not fit for adoption.

How it all started

Bowell spoke to Life with Cats about the sanctuary and why she decided to start it. After moving to Greece with her husband due to health issues, she became aware of the fact that people around there didn’t take too kindly to cats. They were seen as a pest, much like rodents. Bowell wanted to change this.

“I’d heard countless stories about [cats] being poisoned, burnt, thrown in the ocean, kicked – and both sick cats and newborn kittens are regularly thrown in the dumpster. Basically, it’s a very ignorant culture with an old agricultural mentality when it comes to animals. So part of the reason for choosing to come here was that I knew I could serve some purpose with the unwanted cats. Things were only gradually beginning to move in a different direction with regards to cats and animal welfare and I knew I wanted to make a positive change. Still, my involvement in cat rescue rather ‘happened upon me’.” 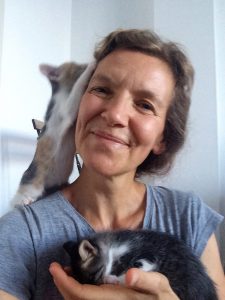 Joan Bowell wanted to create a safe haven for cats in a place where people see them as a pest.
Image courtesy of Joan Bowell

The meaning behind the name

Bowell and her husband started their good work shortly after settling in Greece and have rescued many cats since – even those the vet had no hope of saving. The sanctuary’s name, God’s Little People, was inspired by the blog Bowell started to write about the work she was doing. The name initially came to her through the works of the Greek philosopher Pythagoras. He referred to humans as “God’s big people” and to animals as “God’s little people”. Bowell was so touched by his work and outlook on life that she decided to use the name for her blog, and later the sanctuary. 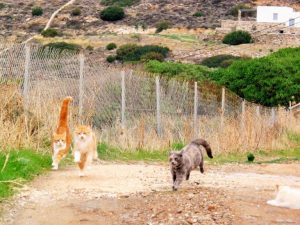 The cats love their playtime outside.
Image: God’s Little People

Covering all the costs

Bowell and her husband covered the sanctuary’s costs for more than a year, but it became more and more expensive to keep things up and running. They hopped onto Facebook to ask for help, and Bowell said that the support they got from people were amazing. She also started using her background in art design and started to create illustrations of some of the beautiful and silly moments she’s had with the cats. 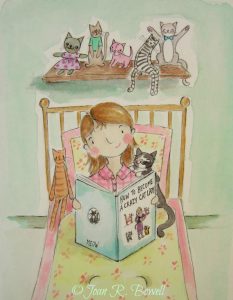 She sold the original illustrations and made prints and cards which she then started selling on Etsy. All of the proceeds go directly to the cats. She also started doing sponsorships to gather more funds.

I want to work there!

Getting back to that “cat whisperer” job, Bowell received thousands of applications for the job after the post went viral, and we’re pretty sure the lucky person who got the job is never leaving that paradise. The sanctuary seems to be growing and expanding all the time though, so there’s bound to be more job opportunities in the future – just keep your eyes peeled for any ads on their Facebook page.

It’s great that Bowell took the initiative to save and care for so many cats in need. We can’t think of a better way to show love to God’s little people than taking them in and caring for them like they’re your own. Hopefully, more job postings will follow and who knows, you might end up living in cat paradise sooner than you think.