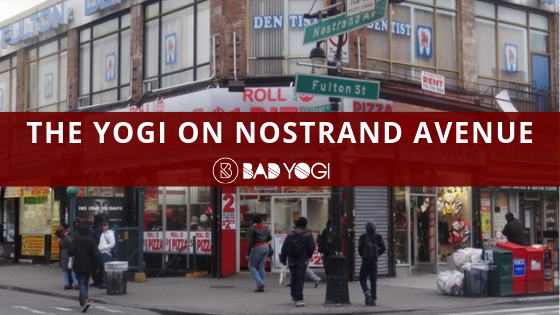 The Yogi on Nostrand Avenue

Today, there are probably 20 yoga studios on Brooklyn’s Nostrand Avenue. But in 2005, there were none at all. So my friend Illy rented out a local Caribbean dance hall to teach her own class. I had been in classes off and on for about six years. But Illy had trained under a Jedi master yogi in Washington, DC and wanted to share what she knew with like minds and souls. The classes only lasted a few months, but I was there as often as I could be. Aiming to perfect my sun salutations.

I had written a bestselling book. I had written for NPR. One of my books had been even been optioned to be made into a movie by a pretty big production company. I had made most of my boyhood dreams come true, and I wasn’t even 30. I wiggled Illy’s class into a short story submission for an anthology and it got accepted for the book, and the book was published. Then I forgot all about it for a long time.

I had been far from an “all in” yoga guy in my 20s. I could barely pronounce (much less memorize) the names of the asanas and their importance. But when my publisher wanted a new book from me after a stretch of quiet years, I found myself burning the midnight oil to create something I could stand behind with pride. This led me back to that short story I had published all of those years before, one that I had simply called “Thursday”.

The hero of this new series was Jamison “Kango” Watts, a streetwise African American man in his early 40s with an aura powerful enough to stop bullets.  Kango’s yoga practice is the source of his power. Drug free (save for the occasional whiskey), Kango lives in a world where a group of yogis and yoginis are fighting a complicated war involving real estate developers, politicians, crooked cops, and a witty restaurant maitre’d who only talks about himself in the third person. But before I could finish Kango’s story, I had to deal with my own.

So, I pulled the mat out of the closet and rolled it onto the floor. It had been three years since a poorly-planned attempt at a headstand almost retired me from yoga permanently. But the first thing is to stay in the moment where you are. I remembered what I’d learned about hand and foot placement in my downward facing dog, dolphin, and four-limbed staff pose. I moved into tabletop, plank, and reverse plank, taking my time with the shoulder stands and core-builders. And I remembered how to breathe.

Days and nights melted like butter, but I finished the book on extended deadline.  Kango is a man searching for healing, but refusing to acknowledge his own injuries. A man living in the past and ignoring the future because it requires him to get over himself. As a character, he is the embodiment of those days when we hesitate at the start of a salutation sequence or find all kinds of reasons why we shouldn’t practice, most fueled by doubt, fear, and misdirection.

I, however, am not Kango Watts. Once I push myself a little, once I move with purpose, maintaining alignment, my body focused totally on itself. I easily remember that not only is yoga something I love to do. Along with creating,  it makes me whole.

Volume One of Kango’s story can currently be found on shelves in the novel, Nostrand Avenue. While I can still be found on the mat, well hydrated, with an eye on calories and harmful ingredients. I let the breath lead me from Brooklyn to Los Angeles – to wherever the next curve in the road takes me. The breath carries words to ears like dandelion wishes on the wind.

Kenji Jasper is an author, journalist and screenwriter whose work has appeared in Essence, VIBE and on National Public Radio. His first novel, Dark, was a Washington Post bestseller and he has earned praise for his books, Cake, The House on Childress Street and his co-editing of the anthology, Beats, Rhymes and Life: What We Love and Hate About Hip-Hop @kenjijasper on Twitter @properutensils75 on Instagram