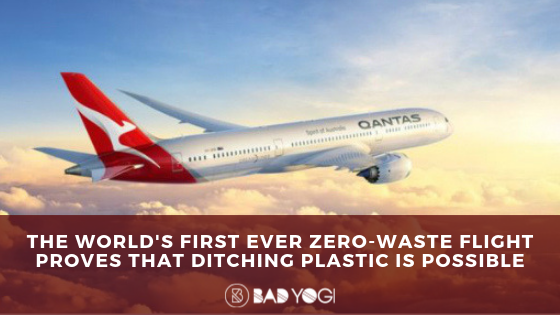 The world is starting to take note of the damage plastic is causing. You might’ve noticed that your favorite restaurant has recently switched from plastic to paper straws, and it’s not just the fast food industry that’s taking note of the problem – some airlines are also starting to reduce their plastic waste. In fact, Qantas airlines recently undertook the first ever “zero waste” flight in the world. It seems we’re making progress.

Qantas is paving the way for zero-waste flights

According to ABC News, Qantas, which is an Australian airline, carries over 50 million people every year, and the waste they produce in the process is equivalent to 80 fully loaded Boeing 747 jumbo jets. Imagine how much waste airlines all over the world are producing every year. When you really start to think about it, it starts to get really scary.

Qantas wants to change the narrative when it comes to plastic, and the airline flew the first ever zero-waste flight from Sydney to Adelaide on May 8. Andrew David, Qantas Domestic CEO, said that the first waste-free flight was all about testing the products they’ll be using and see how much they could refine the waste process. They also wanted to get much-needed feedback from their customers.

How did they do it?

You might be wondering how exactly they went about the whole process. Well, the new products they were using on the flight were made of materials that can be reused, recycled, and composted. 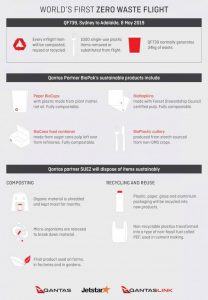 On the May 8 flight, the airline substituted about 1,000 single-use plastic items with sustainable alternatives. For example, containers on the flight were made of sugar cane paired with crop starch cutlery. Some plastic products that were previously used, like individually-packaged servings of milk and Vegemite, were taken away from the selection of in-flight products altogether. 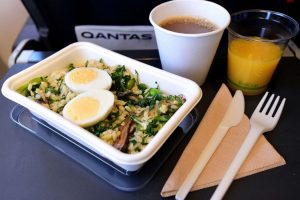 Qantas is using biodegradable and recyclable food and beverage packaging on their flights.
Image: Bianca De Marchi/EPA via Shutterstock

What are the airline’s long-term goals?

According to David, a flight from Sydney to Adelaide usually produces about 75 pounds of waste, which adds up to about 150 tons of waste in a year. The airline’s goal is to reduce this number by cutting 100 million single-use plastics by 2021 and reduce the airline’s waste by 75% come 2022.

Even the employees are impressed with the airline’s new initiative

After the completion of the world’s first ever zero-waste flight, one Qantas employee tweeted a photo that compared the one solitary bag of waste that would be recycled or repurposed to the several bags of waste usually generated by a single flight. It’s a massive difference. At this rate, we’ll be able to make a big difference in a short period of time.

My favourite photo from today’s world-first waste free @Qantas flight is also the least glamorous… the usual landfill waste from a SYD-ADL service vs the small bag (forefront) from today’s flight (and even that waste will be re-used as an alternative fuel source in a kiln) pic.twitter.com/3rYnwKTUGC

The Natural Resources Defense Council’s expert on solid waste reform, Eric. A Goldstein, praised Qantas’ attempt at moving toward zero-waste flights. He added that even though airplanes still burn a lot of fossil fuels, this new initiative has a positive impact in its own right and he’s hoping that other airlines will take note of it and start to do the same. “Other airlines have been seeking to cut the amount of waste they generate, or do inflight recycling. This aiming for a zero-waste flight takes those efforts to the next level,” he said. Next-level it is indeed.

This is not the first time Qantas has been the first to try out something entirely new to help the environment. Last year, the airline became the first to ever make use of fuel made from mustard seed on a flight between Australia and the US. It’s pretty cool, and it proves that there are ways to travel in a way that is more environmentally friendly.

The US is also starting to cut back on plastic

Let’s all help to take care of the plastic predicament

It’s great to see that the world is finally starting to do something about the plastic predicament. We wished it could’ve happened sooner – it would’ve spared the environment a lot of damage. At least something is being done about it right now, and that feels very good. All of us can also do our part to reduce our own “plastic trail” by recycling and reusing the plastic we have. If everyone does their part, no matter how small, we can make some really big changes. Let’s be kind to the planet – it’s the only one we have.