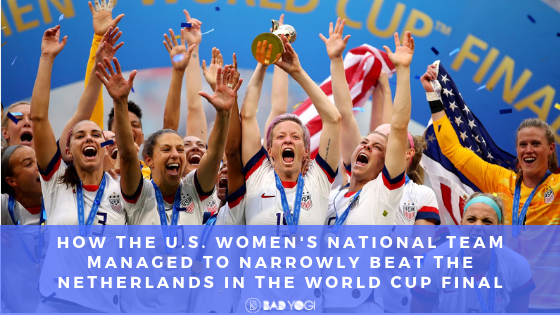 How the U.S. Women’s National Team Managed to Narrowly Beat the Netherlands in the World Cup Final

This past weekend was a joyous one for Americans, and not just because it was longer than usual. On Sunday, the US Women’s National Soccer team won the Women’s World Cup for the fourth time, beating the Netherlands 2-0. What a time to be alive!

It’s been a wild ride, with the team narrowly beating Spain, France, and England to finally make it to the championship game against the Netherlands. Sunday’s game was a nail-biting experience for fans when the first half of the game went by without a single score from the team. According to BuzzFeed, the Netherlands’ goalie, Sari van Veenendaal, was a force to be reckoned with. The US team have managed to score within the first 12 minutes of every game in the World Cup match this year, but Sunday’s was different.

Needless to say, people were stressed out about how the game would turn out, but Megan Rapinoe unexpectedly took to the field in the 61st minute, kicking the game into gear with a penalty kick. She wasn’t expected to play because of a hamstring issue, but it’s safe to say that everyone’s glad she came to the rescue. Rose Lavelle scored the second goal of the game just before the 69-minute mark, bringing the score to 2-0. Lavelle’s score was also the Americans’ 26th of the tournament, breaking a World Cup record.

Rapinoe, 34, was pretty much speechless after the win, saying, “It’s surreal. I don’t know how to feel right now. It’s ridiculous.” She was also awarded the Golden Boot for scoring the most goals in the shortest amount of time. 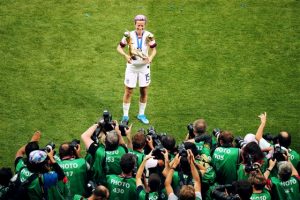 Megan Rapinoe won the Golden Boot trophy for scoring the most goals in the shortest amount of time.
Image: Lucy Nicholson / Reuters

The team’s win was a really big moment for a lot of reasons – according to NBC News, the US Women’s National Team is currently in a legal fight, demanding that they be paid the same as their male counterparts, and as the game came to a close, the crowd showed their support by chanting “equal pay”.

This year’s World Cup also saw record-breaking ratings and viewership numbers, which might be due to the fact that it brought up a lot of conversations about present issues, like that of equal pay and gender equality. This season also saw an increase in the visibility of LGBTQ athletes (the team has five proud LGBTQ players), which is a huge win. The call for equal pay, however, is still an ongoing issue. It’s ridiculous that women still don’t get paid the same as men. Come on, we’re in the 21st-century people.

There were also some public battles with Trump

Then, of course, there were the public battles with Trump, which started in June when Rapinoe said that, should she get an invitation to visit the White House, she would decline it. The video clip of the interview was shared on social media and Rapinoe could be heard saying, “I’m not going to the f—ing White House.” She added that Trump doesn’t invite teams that he knows will decline the offer, or “like he did when the Warriors turned him down, he’ll claim they hadn’t been invited in the first place.”

Trump, unsurprisingly, lashed back in an extensive series of tweets. He said that he would invite the women’s team whether they win or lose, and added a message especially for Rapinoe: “I am a big fan of the American Team, and Women’s Soccer, but Megan should WIN first before she TALKS! Finish the job!”

Well, Rapinoe did finish the job, quite literally. When Trump was asked whether he would invite the team to the White House after their win, he said, “We haven’t really thought about it. We will look at that.”

Congratulations on the team’s win flooded social media on Sunday.

Congrats team USA! Billie says it best here! So happy for each one of you and so proud. ❤️ @USWNT https://t.co/WK2Yi2z8F4

To our 2019 World Cup Champion @USWNT: you have inspired the entire country — and New York City knows how to celebrate champions. We’ll see you Wednesday at 9:30 AM for the Ticker Tape Parade down the Canyon of Heroes. #OneNationOneTeam pic.twitter.com/bwCEoJYg3r

The USWNT has been badass players for some time now – they were undefeated in 2018, and earned their 500th win in November last year after beating Portugal. This made them one of the most successful teams in US sports history. These ladies are a force to be reckoned with. We can’t wait to see them play, and slay, again. 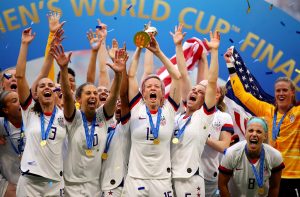