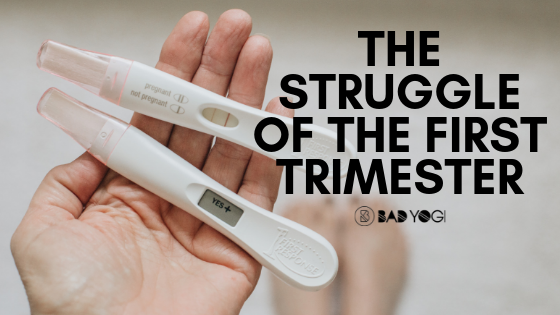 The Struggle Of The First Trimester

Currently just over 9 weeks into my third pregnancy (the first a miscarriage and the second a stillborn 4 months ago) I’m feeling lethargic, nauseous 24/7, as tired as I might be after staying awake for 5 days straight with a perpetual hangover, lacking motivation to do anything but watch Netflix all day, and fighting the urge to yell at my husband who criticized me for having a coke with vanilla ice cream.

The jubilation I felt at seeing that second pink line on 14 different tests lasted for a few weeks. Though my happiness was riddled with anxiety at the possibility of losing another baby, I watched Youtube videos about positive thinking and tried to control my thoughts.

I had a 12 day trip to Israel and Jordan coming up and felt terrified that the first trimester of this pregnancy would be just as bad as the last. I referenced various speeches by Marissa Peer, hoping I could keep away all the horrific symptoms that plagued me the first time with only my thoughts. I went on the trip, enjoyed many days of sunshine and tours, and only had a couple minor bouts of nausea. But, by the last day, traveling through multiple airports and trying to sleep on long flights, I could feel the symptoms creeping up on me.

Since I’ve been back, my days have been filled with binge watching The Big Bang Theory and The Good Wife on Netflix, alone in bed, isolated from the world, too tired to work or even go to the grocery store, my circulation being cut off by Sea Bands (acupressure wrist bands that supposedly fight nausea, though they seem to just bruise my tendons), eating strawberries and whipped cream (the strawberries and cream frappucinos at Starbucks got too expensive after a week), and going crazy from the loneliness.

Apparently it’s the custom that a woman must wait until the 12 week mark to tell the world of the new life growing inside of her in case she has a miscarriage.

In an article from abc.net.au, a woman named Sam Rowe spoke of her experience.
“I’ve had one stillbirth, five miscarriages, and a chemical pregnancy. I have no living children as of today,” she says. The article continues, “Sam is now a passionate advocate for challenging the 12-week rule. Sam says it’s important women feel supported to announce their pregnancies earlier if they choose to, so that they have both an opportunity to celebrate, and to receive support in the event of a pregnancy loss.”

Unfortunately, much of the time the hardest trimester, the darkest, most isolating, most anxious time for a woman during her pregnancy is characterized by secrecy and trying to hide her miserable physical symptoms. With no bump to show, and looking normal on the outside, there doesn’t seem to be any understanding from the outside world of the tsunami of hormones wreaking havoc on the body of the secretly pregnant woman.

Society portrays pregnancy as this miraculous period when a woman will glow and radiate from within, while she sits on a bed of kale doing yoga, drinking green smoothies, and feeling like Mother Nature. It’s no wonder the first trimester seems to come out of nowhere, leaving newly pregnant women feeling like they got hit by a train and worrying they’re the only one who feels like this.

It’s an isolating experience, and one in which nobody could possibly understand unless they’re going through it. It makes one question why there is such a lack of support for pregnant women during such a trying time, and why we put out this image of what the perfect pregnant woman is supposed to look like. When feeling as sick as women do in the first trimester, it’s hard to deal with all the pressures put upon us, like eating a healthy diet when even the thought of arugula makes you sprint for the toilet.

Sure, one can visit message boards but much of the time responses range from telling the woman to stop complaining so much because “at least she is pregnant” to “that’s how I felt right before I had my miscarriage.” Not the most helpful.

While I’ll eventually be out of the first trimester and hopefully be feeling like a human being again soon, for anyone going through the same right now, just know you are not alone.