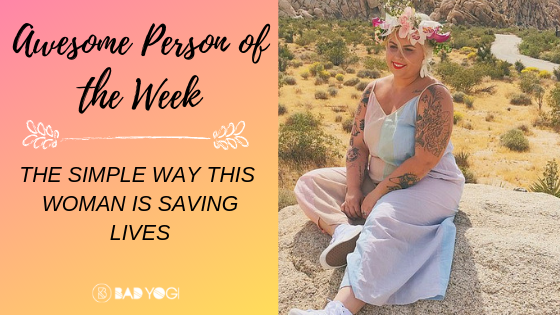 Awesome Person of the Week: The Simple Way this Woman Is Saving Lives

Nicole Leth lost her father to suicide at age 17 and, of course, it changed her entire life. Since that fateful day, she’s been trying to make sure that she helps other people to choose life above their difficulties, and recently she made a bold move to spread this message to more people.

According to Today, Leth has tried her very best to spread positivity in the nine years since her father’s passing. She found comfort in spreading uplifting messages among people, trying to do things that matter to those around her. Being an artist, she tries to do these things through writing and artwork. She told Today: “I realized over the years I could never save someone’s life for them, but I could create an encouraging and affirmative space to empower them to save their own life.” 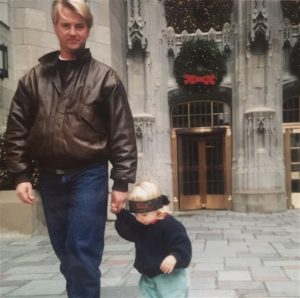 Nicole as a child with her father.
Image courtesy of Nicole Leth

Leth recalled writing down affirmations on stickers and leaving them in public places to serve as a ray of hope to those who see them. She would even give some to her teachers or send them out via email. Her main goal was to let people discover these messages in their times of need. Recently, she decided to take this a step further in order to reach more people. She wanted to amplify the message she’s been trying to send over the past nine years – and she came up with a brilliant idea.

Taking it a step further

If you live in Kansas City, Missouri, you might have seen Leth’s latest message. She decided to take a massive leap and spread some positivity where everyone could see it. It can be found among all the advertisements lining the billboards on a stretch of road in the city – a massive billboard with a simple message: “You are human. You are loveable. You are strong. You are enough.” 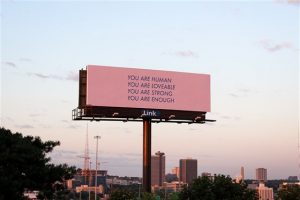 Leth designed the billboard herself and paid for it to run for a month. The message resonated with so many people that the billboard has gone viral since. So much so that the owner of the space has told her that it will run the message free of charge for the foreseeable future.

It resonated with a lot of people

Leth has gotten a lot of positive feedback from people who saw the message, of which many told her that those are the exact words they wish they could’ve said to their loved ones before they committed suicide. Leth says that she’s been overwhelmed by the positive reaction. “The reaction has been unbelievable and heartfelt and overwhelmingly positive. I have been receiving lots of emails from people who said it mattered, or they saw it and had a terrible day and didn’t think they could survive, and without knowing the story of the billboard, they said it let them live one more day.” 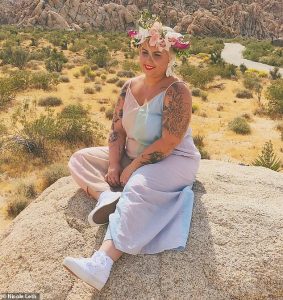 Nicole Leth, 26, has been trying to spread positivity to those around her ever since her father committed suicide 9 years ago.
Image courtesy of Nicole Leth

It must feel quite amazing to know that a message you tried to send to people actually resonated with them and might have helped to save some lives.

Others want to spread the message as well

Others took note of Leth’s work, and now she’s shared the artwork with people who plan to do the same thing in other cities, like Vancouver, Canada, Orlando, Florida, Des Moines, Iowa, Springfield, Missouri, and in Texas. For Leth, this is amazing, because it’s the perfect way to honor her father and spread a message of hope that she knows he would have loved. According to Leth, he always felt things very deeply.

“He truly had the same heart as me and he always felt things so intensely. We’d always go on these cross country road trips and have the deepest conversations about life and people and love. He was the first person who taught me how to make beauty out of hard things.”

Let’s use our resources to spread hope

It took something as simple as a positive message on a billboard to save some lives and spread hope among people. We have so many tools at our disposal to spread good things – we should all use it more. Once you look for opportunities to empower people and make them feel worthy, you’ll find that there are hundreds, perhaps even thousands, of ways to do so. Go ahead and look for a way you can spread positivity to those around you today. You never know whose life you can help save. All of us can try to make beauty out of hard things.