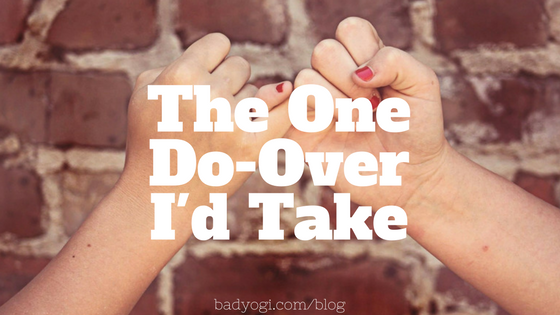 The One Do-Over I’d Take

Sometimes my inspirations are not yoga-related. Sometimes they simply come from observations of the real world and then bounce around in my head for a long time before developing into words. This is one of those times.

About a year ago I was sitting at one of my favorite coffee shops and had the opportunity to witness a truly joyous thing. At a table some 20 feet away from me sat a group of young people, all in their mid-20s. They seemed to be having the best time, just sitting there talking, laughing, and enjoying the moment. It seemed that they had not a care in the world. The most important things in their lives were the friends that were sitting at the table.

At that moment, I thought to myself, what a wonderful feeling that would be, to have so few worries, be free of life’s later responsibilities. I wondered, wouldn’t it be awesome to be in my 20s again and to have so much of life ahead of me?

Oh, the things that I could do, starting with decisions I would change.

In my 20s, I don’t remember caring for things as deeply as I do now. I should have been more empathetic back then. I thought of the dreams of my future I had then and how reality didn’t turn out quite the same. But I also thought how my mid-20s dreams had been superficial and selfish. I did not realize that decisions made by a young man could have such lasting effects. So, to have the opportunity for a “do-over,” to make decisions that were not centered on “getting new stuff and making money” would be awesome. Just think of the differences I could have made.

As I was wallowing in the pool of my own self-pity and regret, I looked over at the table of friends again. It was then I realized the only thing that I would change if I had a do-over would be to work harder on friendship. I would hold onto friends more closely. So I sent a mental note to the friends’ table, hoping that they will remain close for their lifetimes. Hoping that they were there for one another for years to come.

Why wouldn’t I change anything else?

It is because I am a believer in fate and destiny. I believe that all the decisions I have made throughout my 50+ years have led me to where I am now. I know that where I am now, in this time, and in this place, is important. I am important to people I interact with. I am where I am now because I’m supposed to be here. Any change in my past would have changed my path to now.

I don’t know what effect I have had on the people I have touched in the past, and I don’t know what effects my future interactions will lead to. But I do know that if I am compassionate, kind, understanding and empathetic, I will more than likely be a positive, rather than a negative, influence in someone’s life. Isn’t that what we should all strive to be?

Maybe, that’s the wisdom of age creeping into my mind. Maybe it’s now, rather than in my past, that I can hope to make a difference. Who knows?

How about you, yogis? Are there any “do-overs” you would take, or do you feel like regret is a waste of time? Share with us in the comments!