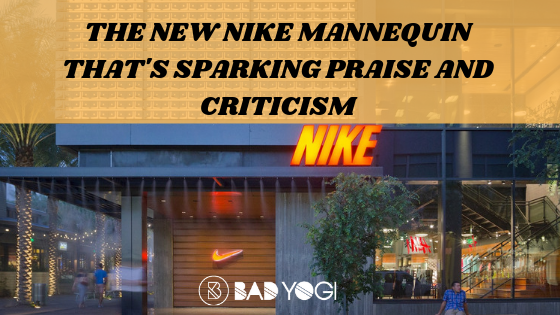 Nike is known for pushing the boundaries when it comes to their advertising – last month, they launched an ad for a new sports bra using a model sporting underarm hair. This, of course, sparked a lot of criticism. Now, Nike has taken its clothing line a step further – they created an entire line for plus-sized women and mannequins to go with it.

Plus-sized mannequins are a rare sight, but now you can see them at Nike’s flagship store in London. Refinery 29 reports that since the launch of the plus-size mannequin, there have been equal amounts of support and negative feedback. 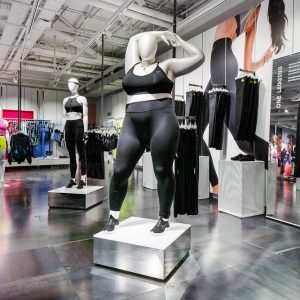 This new plus size mannequin from Nike is sparking a lot of conversations.
Image: Nike

Most people seemed ecstatic about this new direction Nike is taking, hailing it as a big step towards inclusivity in sportswear – and it definitely is. Just because you’re not a super skinny woman doesn’t mean you don’t want to wear pretty leggings while doing your workout just like everyone else out there. There’s no rule that says you already have to be “skinny enough” to start working out. Heck, most women starting out on their fitness journey probably struggle to find clothes to work out in, and how’s that helping anyone? You plucked up the courage and determination to start working out, but the first hurdle, which is buying some sports clothes, is something you can’t even conquer. That makes it so much easier to give up before you even started.

The critics had a good time taking a jab at Nike

Of course, as with all things new and different, people were looking for something to criticize regarding Nike’s new plus size mannequins, and British journalist Tanya Gold had a lot to say about it. She wrote an open letter to The Telegraph titled, “Obese mannequins are selling a dangerous lie.” That’s enough to get anyone’s blood boiling.

Tanya Gold: ‘The new mannequin is obese, and she is not readying herself for a run in her shiny Nike gear. She cannot run. She is, more likely, pre-diabetic and on her way to a hip replacement. What terrible cynicism is this on the part of #Nike?’ https://t.co/51VmvUCxLE

One part of her article that had a lot of body positive activists raging, read, “The new mannequin is obese, and she is not readying herself for a run in her shiny Nike gear. She cannot run. She is, more likely, pre-diabetic and on her way to a hip replacement. What terrible cynicism is this on the part of Nike?” Uh, excuse us Miss Gold, but what terrible cynicism is this on your part? Since when do women have to be skinny in order to be able to run? And since when is your weight an actual indication of how healthy you really are? There are so many other factors at play. You can be plus size and perfectly healthy. Who are we to judge someone’s health based on their size?

A massive step towards inclusivity

Nike probably expected the criticism, but it seems that the sports brand isn’t very bothered by the opinion of people who don’t like what it’s doing. The company is moving in a new direction, and it’s not taking small steps. According to the Cosmopolitan, NikeTown in London sports an entirely new space that’s been set aside for women’s sports clothes, which also sports the entire new plus-size range, along with the mannequins. This is a massive step towards plus-size visibility, which is much-needed in the sportswear realm. It’s sad that those who aren’t in need of it feel the need to say anything about it. It doesn’t concern them, so why don’t they just go about their business and let plus-size women be happy about the new range? 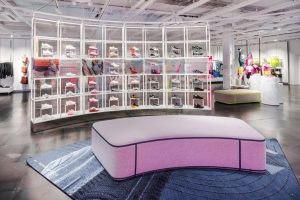 NikeTown in London set aside an entire space just for the women’s range, including the plus size attire.
Image: Nike

Celebrating sports, no matter what your body type

Nike’s GM/VP for Women in EMEA, Sarah Hannah, is very excited about the new developments and says that Nike’s main goal is to serve female athletes.

“With the incredible momentum in women’s sport right now, the re-designed space is just another demonstration of Nike’s commitment to inspiring and serving the female athlete. This is more than a shopping experience, it’s a destination to celebrate sport just in time for an incredible summer of football, netball, athletics and more.”

We couldn’t agree more. Why can’t people just set aside their judgments and allow everyone to celebrate the sports they love, regardless of their shape and size? Tanya Gold might think that plus-size women can’t run, but most of them are, in fact, just as active as those who don’t fall in the plus size category. They’re the ones you see running, lifting weights, cycling, and doing yoga. According to Refinery 29, critics who tend to say that plus size women should exercise more are the very ones complaining about the mannequins right now. They are the same people who are now attacking plus size women for working out and slamming the clothes made for them to do so. How utterly hypocritical is that?

Plus size women make out more than half of the population

Plus size women deserve representation, and those who hate them so much that they think otherwise really need to have their heads examined. Those mannequins aren’t encouraging obesity – it serves as a representation for women who’ve never had any before.

Most women aren’t super skinny, in fact, a study published by the International Journal of Fashion Design showed that the average dress size of American women ranges between sizes 16 and 18. According to Racked, a size 14 and up are considered plus size in America. The Independent reports that the average dress size in the UK is a size 16, which is the same as a US size14. Plunkett Research estimated that 68 percent of American women wear a size 14 or above. So, people like Gold are actually insulting more than half of the female population with her claims. The majority definitely deserves some representation, don’t you think?

People are not taking kindly to Gold’s letter

Gold received a lot of backlash from a lot of people. Social media was buzzing with women replying to her open letter – and needless to say, most of them were not happy, and they weren’t shy to say so.

Wow @Telegraph – nice job with the Tanya Gold click bait. I look like that @nike mannequin, and I’ve done a 10k, a half, & a marathon this year. And there’s another 10k & a half coming up. If you think obese women can’t run you’ve clearly been living under a rock. pic.twitter.com/Pb2rFM5sRd

One woman tweeted that Gold had every right to express her opinion, but that she had it all wrong. She suggested Gold goes for a run and perhaps then she’ll feel better about the whole affair. Ohh, Burn!

Tanya, with all due respect for your right to express yourself, NO. Yes, women of every size can AND DO run. And walk. And cycle. And dance. And yes, they deserve clothes just as nice as their skinnier sisters. Stop. Don’t shame and punish. Go for a run. You’ll feel better. @Nike https://t.co/A1ktQ3Qmxz

What an ignorant shame mongering clown Tanya Gold is. What a hateful, judgemental, uneducated stance to take on what is a positive, progressive and BRILLIANT move made by @Nike @NikeLA @nikestore I COMMEND THEM ENTIRELY and think Tanya Gold best find the nearest bin and jump in🚮 https://t.co/tNbfjDUWQs

Other plus size women let their voices be heard on Instagram, posting proud selfies of themselves in their plus size sportswear.

We don’t have time for haters

One thing’s for sure – haters are gonna hate, but plus size women are going to keep doing what they’re doing. We’re glad to see this amazing progress. Nike deserves some credit for what it’s doing. Having such a big sports brand take the necessary steps to include women off all sizes in its sports ranges is incredible, and hopefully, it will serve as some encouragement to other brands to do the same.

Those who don’t like what they’re seeing should ask themselves how they would feel if the tables were turned and there were no sports clothes or mannequins available in small sizes. We bet they wouldn’t like it, so they can all just shut the hell up. Thank you, next.