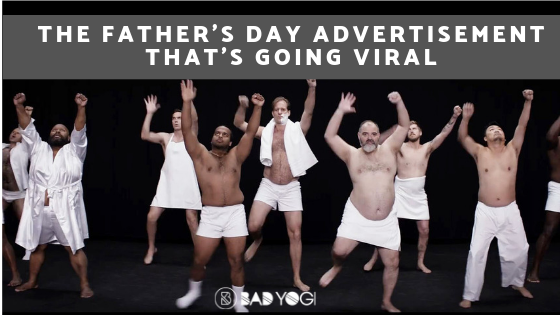 Father’s Day is around the corner, and since the beginning of June, there have been ads everywhere offering advice on what to get dad for this special day. Dollar Shave Club, however, took its advertising to the next level – and it’s pretty amazing.

Body positivity is a popular subject when it comes to women, but you rarely hear the term being used where men are concerned. It’s important to remember that even men tend to feel insecure about their bodies, especially when they start to age. It seems that body positivity is something both men and women struggle with – the only difference is that there doesn’t seem to be much of a support system for men to appreciate and love their bodies. Hopefully, Dollar Shave Club’s new ad creates awareness and lights the spark that’s needed for change.

Today reports that this new ad shows middle-aged men of all shapes, sizes, and ethnicities either wearing nothing but a towel around their waists or sporting a pair of boxers, all while owning their “dad bods”. The term “dad bod” originated a few years ago as a means to describe the bodies of men who find themselves at the midway point between being totally in shape and completely out of shape. These men usually sport a bit of a belly or some love handles. This new ad celebrates this body type, inviting men to embrace their own “dad bods” and be proud of it. 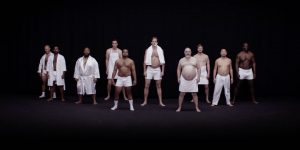 At the beginning of the ad, there’s a text card that opens up with the made-up word “manifique”, which is described as follows: “(Adjective) Used to define the magnificence of otherwise overlooked male body types, often the bodies of Dads.”

After the text card, we are presented with a middle-aged man with a towel wrapped around his waist, doing a slow dance to a song that sings praises to the “dad bod”, with lyrics like “I work hard to get my dadbod…my physique, is unique…manifique.” Shortly after, he is joined by his other companions after which they jump into a choreographed dance. At the end of the dance, there appears a message that reads, “Whatever your bod, welcome to the club.”

Men struggle with body image too

We don’t know about you, but all of this is pretty cool. What better way is there to inspire confidence in men regarding their “dad bods” than showing men with those bodies embracing their unique selves? Dancing half naked with a paunch is probably something that makes most men flinch, especially if they know it’ll be broadcasted for the world to see. Perhaps the rest of the world tends to be oblivious to the fact that men struggle with their body image as much as women do. What better Father’s Day gift is there than giving all dads out there something to make them see themselves as handsome enough again?

Dollar Shave Club said that it wanted to use the video to promote body positivity and that they design their products to make men feel, smell, and look their very best. According to The Drum, the company has put together a series of their products to create the first ever DadBod gift set. It includes toothpaste, shampoos, razors, shave butter, and lotions. It’s everything a man needs. If you’re still looking for the perfect gift to give this father’s day, this is definitely it. 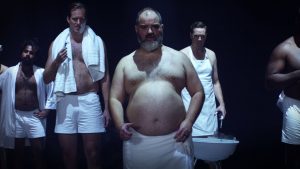 This Father’s Day, we can all make a point of letting our dads know that their “dad bods” are still sexy.
Image: YouTube Screenshot

Creating a support system for men

This advertisement may be pretty amazing, but we can also see it as a sign that we need to pay more attention when it comes to how men experience body positivity. It’s not every day you see “dad bods” on television, in magazines, or on the internet. There’s definitely a lot of room for improvement when it comes to creating a support system for men regarding body positivity. Just like women love to see “real” bodies out there, we’re pretty sure men do too. Where many women feel inadequate because their bodies are not as flawless and skinny as the models’ on magazines, many men feel the same when all they’re surrounded with are images of male models with chiseled abs and bulging biceps.

This Father’s Day, make sure that you let your dad know his body is still awesome, no matter how much it might’ve changed over the years. It is still to be loved, cherished, and appreciated. That’s a true gift.