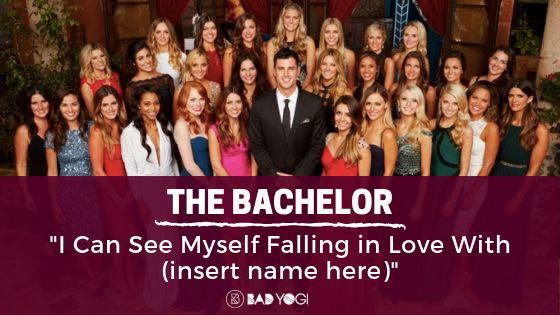 The Bachelor: “I Can See Myself Falling in Love With (insert name here)”

It would be unwise to use Arie Luyendyk Jr.’s season of The Bachelor (otherwise known as the most boring 2 months of television we’ve ever been subjected to) as a drinking game. We heard “I love that” and “wow” so many times I was ready to jab a rose thorn in my eye. Even the ending, in which Arie dumped Becca on national television wasn’t trashy enough to keep me interested.

But, one sentence stood out to me more than others and it’s one that has been repeated multiple times throughout every season. No, it isn’t “for the right reasons.”

It’s, “I could see myself falling in love with (insert name here)”

Falling In Love Is An Easy Thing To Do

On the current season of The Bachelorette, with Hannah Brown, Luke P. is the clear villain because we’re always in need of at least one person who “isn’t there to make friends.” So far, he’s come off as possessive, obsessive, aggressive, and he looks like he’s auditioning for season 2 of that show You, the one where Penn Badgley’s character goes around killing everyone and saving some teeth in a hidden jar because he just loves his girlfriend that much.

In a recent episode, on a group date, the guys had to participate in a talent show. Luke P., Mr. Villain himself, rocked up to the stage without any talent, and tells Hannah he’s falling in love with her. After about 48 hours of knowing her, and 12 minutes of alone time. Barf. Barf. Barf. Not only does this come off as completely insincere, but it says a lot about the show itself, and our perception of love in society.

Splitting Up When Times Are Tough

Multiple Bachelor/Bachelorette’s from the franchise have split from their chosen winner of the show, in fact, almost all of them. This isn’t surprising when the divorce rate is so high. According to Unified Lawyers, the U.S. has a 46% divorce rate, the U.K. comes in at 42%, and Australia 38%.

Just as is shown on The Bachelor, love seems to come very quickly for people, and go even quicker. Contestants go on extraordinary dates, from bungee jumping to helicopter rides, all with the backdrop of exotic locations, as if any of this would happen in everyday life. Is it really so crazy that these couples split up when the cameras and champagne-fueled dates are over? It’s the equivalent to dating someone for 2 weeks and planning a lavish, million dollar wedding, only to realize you don’t have that much in common and don’t really like each other that much when all the excitement is gone.

Life gets tough, and making it through those moments together is what truly bonds you as a couple. Falling in love takes time, commitment, and a desire to be with that person in good times and bad (those wedding vows exist for a reason.) Love that lasts needs to be built on a strong foundation; you wouldn’t expect a house made from paper to survive a tornado would you?

With the advancements we have in technology, everything is at our fingertips, instantaneously. You can go online and have anything you want delivered to your door, you can have an entire career with just a laptop, you can go on Tinder and cut through all the bullshit of buying someone a drink at the bar; it’s mind boggling what we can do with the internet. We’ve manufactured the dating process, and turned love into simply swiping right or left with no feeling, wondering if the next person will be better than the last, and deciding it’s not really “meant to be” the second a minor amount of conflict arises.

Contestants come on the The Bacherlor/Bachelorette “hoping to find love” as if it’s something they can just decide on, like what kind of topping they’ll order online at Domino’s.

Unfortunately, the couple at the end is pressured (and/or forced) to become engaged at the end of the show, so producers can prove it only takes a few ingredients thrown into a reality t.v. blender to create lasting love.

On Colton Underwood’s season of The Bachelor he stated throughout the show that he was looking to get engaged and find a wife, which caused the woman he wanted to choose to dump him. Cassie felt so much pressure to make a lifelong commitment to Colton after just 2 months of knowing him that she removed herself from the process (which ultimately lead to that fence jumping incident, and a meme that will go down in Bachelor history.)

This ended up being one of my favorite twists in the show so far. A couple, who decided to stay together at the end, without forcing themselves to get engaged. Sure, it may have been anti-climactic being that the entire season is leading up to what the audience believes will be an engagement, but the fact that the lack of this is what shocked viewers is actually quite telling.

While The Bachelor/Bachelorette franchise is obviously manufactured reality television, it plays a bigger role in our view on love than we might care to admit. Giving people the idea that love can be forced with a few fairy tale dates is bad enough. But, when the audience is made to think that the first sign of conflict or true reality means throwing away that relationship and instantly finding a new one, it paints a picture of the opposite of true commitment.