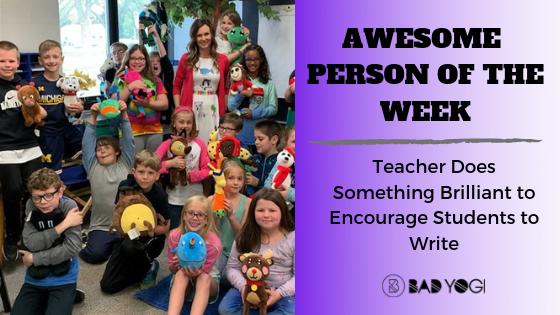 Awesome Person of the Week: Teacher Does Something Brilliant to Encourage Students to Write

We live in an age where kids grow up with computers and cellphones – everything is visual and not much is left to the imagination. It’s no wonder that many kids don’t like reading or writing – if you can just watch the movie, why read the book? And if there are already so many books out there, why do you need to write another one? Today reports that third-grade teacher Shannon Anderson, who works at Van Rensselaer Elementary School in Rensselaer, Indiana, wants to change this mindset – and she’s discovered a brilliant way to get kids excited about writing.

Anderson loves writing, and she loves to instill that same love in her students. She realized that in order to get them excited about something they clearly didn’t like doing, she had to think outside the box. Then she came up with an idea that’s nothing short of brilliant. She has a long-term book project that her students work on, and while that might seem like the opposite of a bright idea for kids who hate writing, Anderson added one element to all this that changed everything – the kids not only write their own stories, they also create illustrations of their characters, and that is where the magic happens.

Anderson takes her students’ illustrations and sends them to Budsies – a company that makes custom stuffed animals. Yes, these kids create characters on paper, which Budsies then turns into actual, touchable stuffed toys. As soon as the toys arrive at her classroom, Anderson records her students’ reactions while they’re unboxing their creations – and even the toughest of students can’t help but coo with excitement when they are able to actually hold the characters they created in their very own hands. “Every single student’s instinct is to be in awe, to hug it and love on it. It is something very special that they created. It is powerful,” Anderson says. 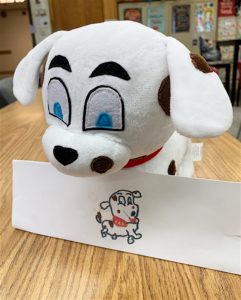 Anderson loves how detailed Budsies’ work is – one student wrote a story about a sea turtle that carries a blanket with it. When the turtle arrived in its soft toy form, it was clutching a blanket, just like it does in the story. For Anderson, it’s amazing to see how impressed the children are by the soft toys – something they thought up all by themselves becomes something tangible. Anderson’s hope is that this project helps kids to see that “writing is joy.” 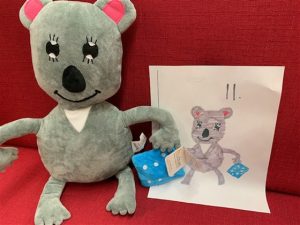 Budsies makes the animals exactly like the illustrations.
Image courtesy of Shannon Anderson

The project has been running for three years now, and Anderson says that she knows the kids will treasure these toys forever. Some of her siblings have taken part in a similar project and they all still have their stuffed toys.

This kind of project is, of course, not cheap, but Anderson applies for grants to cover the cost. She wants her students who can’t afford it to still be able to get their soft toys – no one is excluded. All of them get to see their characters come to life, no matter what their parents’ resources are. 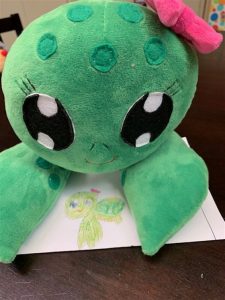 Anderson raises funds to ensure that all her students get a stuffed animal, even if their parents can’t afford it.
Image courtesy of Shannon Anderson

What’s most precious about the project is that Anderson gets to create very special and lasting memories with her students – and that’s what’s most important to her.

“It is just a very special project and I love that we are able to do it over time. It gives them a lot of ownership and excitement.” 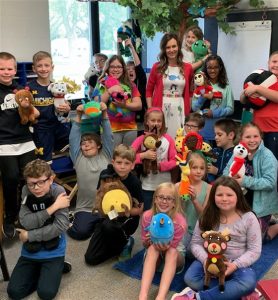 Anderson also lets her students draw on her dress at the end of the school year so she has something to remember them by.
Image courtesy of Shannon Anderson

We need writers in the world

We can’t think of a better way to get kids excited about writing again. Seeing your character “come to life” like that at such a young age is sure to instill some sort of love for writing and reading. We really need a generation that can continue to tell stories, because we all need the distraction of a good story from time to time.