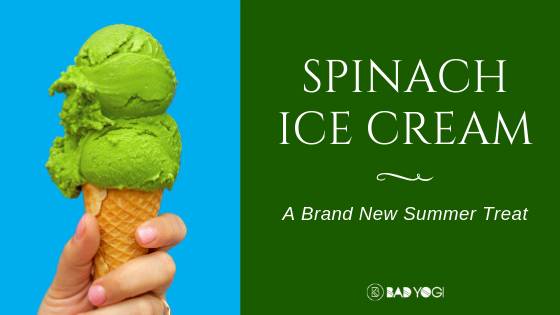 We all know that spinach is really good for you. It’s a superfood after all, and people add it to all sorts of dishes. Spinach is really delicious, but this will be the first time it is served as a dessert. The good news is that it will also be completely vegan-friendly. We’d expect nothing less from spinach ice cream.

While some may flinch at the thought of eating spinach for dessert, the ingredients seem pretty delicious. Not only is the ice cream packed with nutrients because of the spinach, but its base also contains house-made raw cashew milk, pure cocoa butter, coconut cream, raw organic coconut oil, and organic cane sugar. It’s starting to sound a lot more appealing.

The method behind the madness

Elize Zitsman, who is the head of research and development at Van Leeuwen Ice Cream, says that when the company was presented with the opportunity to collaborate with Popeye, they knew their new flavor had to be plant-based. Everyone who knows Popeye knows that he gets all his strength from spinach, so it made sense to create an ice cream that contained exactly that. In the age of today where most people strive to eat healthier, this ice cream is bound to gain some popularity.

The official name of this new ice cream is “Popeye’s Fleet Treat”, and on top of all the ingredients found in the base, the ice cream also contains real organic spinach leaves, extra virgin olive oil, turmeric, and sea salt. The question on everyone’s lips, of course, is how it actually tastes. According to Van Leeuwen, the ice cream has a sweet and savory taste with a flavorful punch. Well, that doesn’t give us too much to go on, so we guess you’d need to try it for yourself in order to decide whether you like it or not.

It ain’t cheap either

Since this ice cream is a limited edition flavor, it will only be available for two weeks – starting right now and ending June 2. If you’re a die-hard spinach lover, you better go get your scoop fast, but prepare yourself to spend some extra dollars on this delicacy, because it’s far from cheap. A single scoop will sell for $5.75, a double scoop will cost you $7.75, and a triple scoop sells for $9.75. Patch reports that the ice cream will only be available at selected shops, which include the SoHo, South Street Seaport, and Hudson Yards stores.

People aren’t sure whether they’ll like this new flavor

After the news of the new ice cream hit the web, people took to social media to talk about the strange new flavor, with many saying that they’re not sure whether they’ll actually try it.

The only green ice cream I will consider is Haagen-Dazs Pistachio.
If I wanted spinach –which, btw, I’ve never had for dessert– I would just have spinach.

Some argued that they like spinach, but wouldn’t want it served in the form of dessert.

Ok, I'm one of those people willing to eat raw spinach by the handful (not nearly as fulfilling or tasty as carbs, but I can do it)… Spinach ice cream though?? NO WAY! Get me something with chocolate, mint, and or cookie dough…

I love me a good spinach salad. Cook spinach, No. Ice cream, hell no

Some where intrugued and was even thinking of giving it a try.

Try it for yourself

There’s no arguing that it’s a super weird flavor to bestow on ice cream, but you won’t know if it’s any good until you’ve tried it. Sometimes the stuff that seems awful can turn out to taste pretty good. We’ll have to wait and see whether that will be the case with this ice cream.

What do you think about this new flavor? Would you try it?