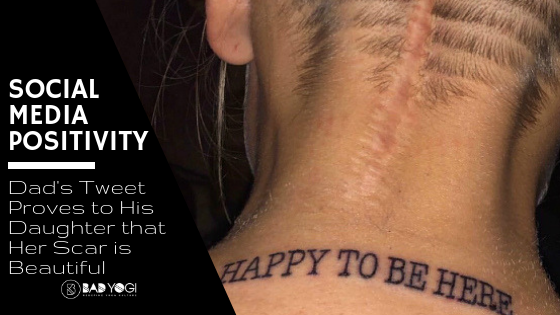 Social Media Positivity: Dad’s Tweet Proves to His Daughter that Her Scar is Beautiful

All too often social media is the main culprit when it comes to spreading negativity all around the world. Despite the cloud of bad vibes that seems to envelop it at times, it has been proven once again that social media can also bring people together and spread positivity and awareness.

BBC recently reported that Justin Brower from Raleigh, North Carolina, who is the father of three girls, posted a photo of his youngest daughter’s scar on Twitter after realizing that she was very self-conscious about it – and the response was overwhelmingly positive. 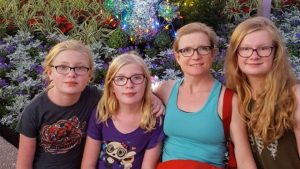 Mya (left) with her sisters Iris and Jade, and their mum Kelly. Photo: Justin Brower

Justin first realized that his 12-year-old daughter, Mya, was very self-conscious of a scar she has on the back of her neck when she was wearing her hair up, baking cookies. Her twin sister commented that she should wear her hair up more often because it looked cool, to which Mya replied that she couldn’t because her scar is ugly and people think it’s weird.

Mya got the long scar on the back of her neck four years ago when she had Chiari decompression surgery, and it seems that she’s been trying to hide it from the world ever since.  After realizing this, Justin told her that he thought the scar looked cool and that other people will too. To prove it, he asked her if he could take a picture of it and post it on Twitter so she could see that it’s not just her dad who thinks so. He could never have anticipated the response.

My daughter (12) doesn’t wear her hair up because of her scar. She thinks it’s ugly and afraid of what people will think. I think it’s badass. Can you please show her that her daddy’s not the only one that thinks so. Likes and comments (and RTs) super appreciated! Thanks! pic.twitter.com/kcK3zoeqmI

Others shared their scars too

The post resonated with people all around the world, who in turn shared pictures of their scars, letting Mya know that she should rock her scar and not hide it any longer. The post was shared more than 60,000 times and got more than 12,000 comments. One Twitter user wrote, “Scars are a sign of strength both physically and mentally. It shows she’s a warrior.”

Tell her she is part of a very brave club. She needs to rock her scar! pic.twitter.com/SfRLl6PBTQ

Same goes to me girl 🍻
We are badass 👊🔥 pic.twitter.com/USLyKz9irQ

Needless to say, Justin hadn’t expected the overwhelming response, saying that he was only expecting the people he usually interacted with on Twitter to reply. Instead, thousands found something they could relate to. He added that he doesn’t intend to tell Mya how to look, but emphasized that he just wants his girls to be confident in their bodies and themselves. “If I can help teach them that, then I’ve done my job as a dad,” he said.

Mya couldn’t believe the response either, saying that she hadn’t expected her dad’s tweet to gain so much attention and couldn’t really understand how it got so popular. The tweet did its job though – she’s no longer self-conscious of her scar after seeing others share theirs. She now has a completely new mentality: “A scar makes you who you are and if people don’t like it they can just go away.”

Can we get a “hell yes!”? This just once again proves that social media is capable of uniting and empowering people all around the world when used in the right way. Thanks to Twitter, Mya has regained her confidence and having one more girl out there knowing that she doesn’t have to be shy of her body and its scars is definitely a big win.