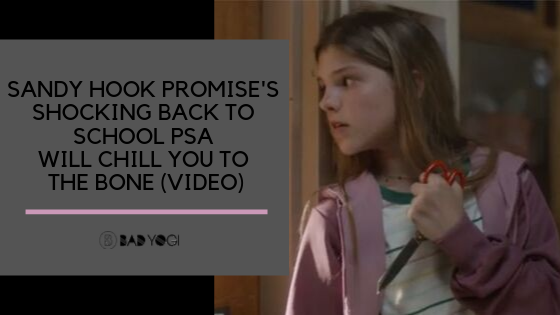 It’s back to school time, which means parents are gearing their kids with everything they need to make this next school year a success. While this is a typical, normal thing that happens every year, Sandy Hook Promise used the opportunity to send an important message – and it will chill you to the bone.

The non-profit organization that focuses on teaching students and adults about the warning signs of gun violence in order to prevent it, created a back to school PSA that debuted on Today this morning.

Giving people a glimpse of reality

The video features students donning their new school gear. At first, all the students are talking about how much they love their new accessories. Pretty soon, it all changes when gunshots are heard in the school halls. Amid the chaos, one student says how glad he is that his parents got him new sneakers because it’s good for running. Another student says she loves her new socks, because it’s great to use as a tourniquet for a bullet wound. Similar scenes follow until the video ends dramatically with a girl crying in the bathroom, saying that she’s happy her mom finally got her a cellphone because now she can stay in touch with her. The scene comes to a close with the girl texting her mom that she loves her while you can hear the approaching footsteps of the shooter.

What’s the intention behind this?

Does that sound morbid? Well, it’s the reality of kids who are in school today. It’s the reality of every single person in America. The recent shootings in El Paso and Dayton showed that no one is safe anywhere. But when it comes to school shootings (or any shooting, really) there are ways to identify a person who is about to do it beforehand. This clip, titled “Back to School Essentials”, is a part of Sandy Hook Promise’s “Know the Signs” campaign which aims to educate teachers, parents, and students to see the warning signs of a potential shooter before it is too late. 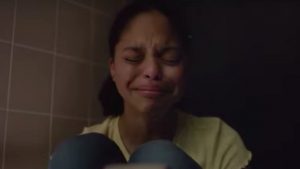 A girl is shown crying the bathroom as the shooter approaches.
Image: YouTube screenshot

Look out for the warning signs

On its website, the organization provides a list of potential signs to look out for, like aggressive behavior over minor incidents, threatening behavior, talking about suicide, social isolation, and an obsession with firearms. The complete list of warning signs can be found here.

Sandy Hook Promise was formed in 2012 after the mass shooting that took place at Sandy Hook Elementary School in Newtown, Connecticut. 20 Children and six adult staff members were killed in the shooting. 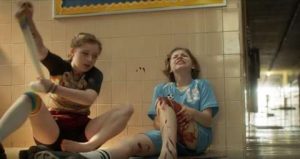 A student uses one of her new socks as a tourniquet on a fellow classmate wounded by a bullet.
Image: YouTube Screenshot

Mass shootings can be prevented

This campaign asks only one thing from all of us – to be attentive to those around us. Once you know the signs, you can get that person help before it’s way too late and more people are killed in another act of senseless violence. Don’t ignore it. About 2,277 of those killed by guns every year are children of 18 years and younger. Research has also shown that most mass shootings are planned well ahead of time – most are planned for six months to a year before it’s carried out. How can no one notice this? In almost every documented case, there were obvious warning signs that people either ignored or didn’t share with the authorities. It seems that we’re part of the problem too. 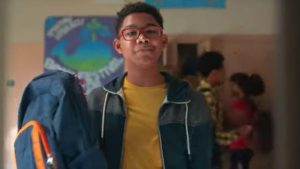 The video starts off on a light note with kids showing off their new school essentials.
Image: YouTube screenshot

We need to start doing something about this

We may all be victims of these shootings, but unless we start to use the resources available to us to see the warning signs beforehand instead of happily ignoring it, nothing is going to change. The only way we can turn this around is by acting. We can’t just sit back and do nothing. No one is exempt from this. Do your part and educate yourself on the warning signs. You might save hundreds of lives in the process.

What do you think of this PSA? Does it manage to drive home the seriousness of this matter? Drop your thoughts in the comments.