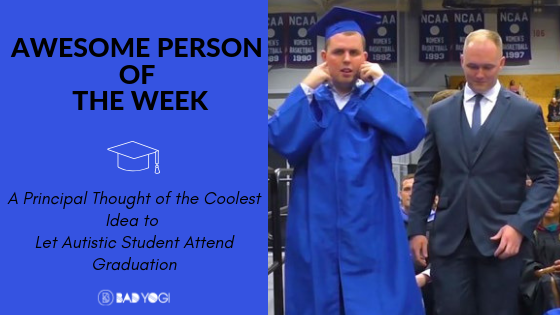 Awesome Person of the Week: A Principal Thought of the Coolest Idea to Let Autistic Student Attend Graduation

High School can be pretty tough, so getting your diploma at graduation is pretty satisfying. For people with autism, just attending their high school graduation can be challenging. This was the case for 21-year-old Jack Higgins, who has severe autism and hates loud noises.

Dreaming of going to graduation

According to Today, Higgins’ parents’ dream was to see him walk across the stage at his high school graduation because he would never go to college or get married, and they really wanted him to at least celebrate this one milestone. They knew it was practically impossible – high school graduation is anything but silent, and with over 2,200 people attending, it was unlikely that Higgins would be able to attend too. Higgins’ mother says that when he expects loud noises, he shoves his fingers into his ears. “He has a lot of sensory issues, noise being one of them. It almost seems as if it hurts.” 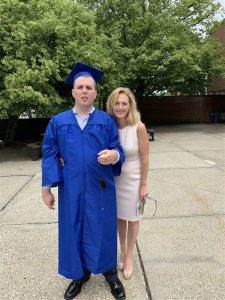 Higgins’ parents really wanted him to be able to attend graduation.
Image courtesy of the Higgins family

Despite the fact that all the odds were stacked against them, Higgins’ parents went to see Lou Riolo, the principal of Carmel High School, to ask him if there wasn’t some way Jack could walk across that stage to receive his diploma. Riolo was determined to help and immediately started to do some brainstorming. After some thinking, he came up with an amazing idea – to have a silent graduation to accommodate Higgins. He ran the idea past his special education teacher and assistant because he knew they’d be honest with him about whether it could work. Riolo’s idea was to let the students sing the National Anthem and from there explain to them how the rest of the event would proceed in silence to accommodate their fellow classmate.

Having faith in the community

Riolo really wanted to make graduation work for Higgins, and even though a friend of his doubted whether he would be able to pull it off, he had faith that the community would step it up, and he wanted to give them the chance to do so.

When Riolo finally broke the news to the Higgins’ parents, they were equally stunned and happy. What they didn’t know was that the graduation would be even more special than they had anticipated. They thought that Jack would get his diploma and that they would leave right after, but Riolo had other plans.

The community stepped up

The graduation started off with Riolo explaining to the students how important compassion is and that they would show some of it to their fellow classmate with autism by having a silent graduation.

“Unlike many of us, Jack is super sensitive to loud noises. So I am asking that we give Jack his diploma first at the beginning of the ceremony. In order to do that I am going to ask a big favor of everybody today. I would like everyone to not clap and not cheer. That’s correct: not clap and not cheer because it may overstimulate Jack,” Riolo explained to the students.  He added that if any of the students wanted to congratulate Jack, they could silently golf clap. When Riolo called Jack to the front, you could hear a pin drop in the auditorium. Then, all of the students slowly rose to their feet to give him a silent standing ovation.

Higgins got to celebrate a milestone

Accompanied by his two brothers, Patrick,24, and Bryan, 17, Jack made his way to the front of the stage, fingers in his ears, readying himself for a noise that would never come. He received his diploma in front of all his classmates and got to celebrate one of the most important milestones in his life. 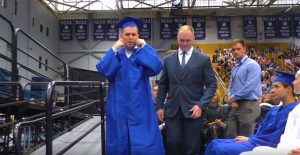 Jack took to the stage with his two brothers accompanying him.
Image courtesy of the Higgins family

Even Riolo was stunned by how amazing the students had reacted to the situation, saying, “What Jack did by himself, his internal mechanism, that’s the real story. That’s the bravery. It’s just awesome. It was just holy, wow. How could you not get moved … It was a home run for Jack and it was a home run for our kids.”

Higgins and his family were incredibly grateful

Higgins’ family was incredibly touched by his classmates’ compassion and kindness. “It was extremely heartwarming. We will never forget it. It was one of the best experiences I have ever had. I hope the students never forget and realize what a difference they made in our lives,” Higgin’s mother said. 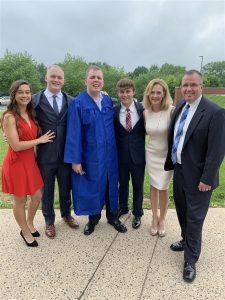 Higgins and his family were incredibly grateful for everything the principal and students did.
Image courtesy of the Higgins family

It’s amazing what a big difference a bit of kindness and compassion can make. What Jack’s principal and classmates did for him is incredible. Everyone deserves to celebrate the milestones in their lives, and if we see someone who needs a bit of help, there are always ways in which we can assist them. This is how beautiful and memorable moments are created. Take care to fill your life with loads of them.

You can have a peek of the graduation below.