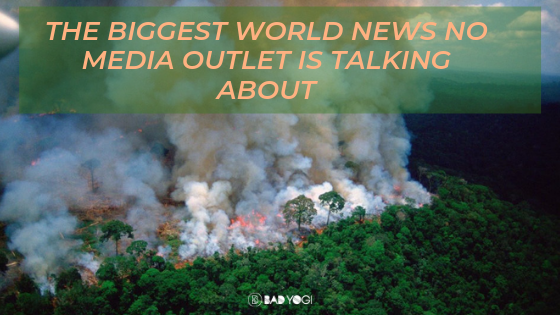 The Biggest World News No Media Outlet Is Talking About

If you only recently heard about the Amazon rainforest fires or are only now hearing about it for the first time, you’re not alone. It’s gotten very little media coverage, which is absurd because as you probably know, the Amazon is often referred to as the earth’s lungs because it provides 20% of the planet’s overall oxygen. Yeah, and it’s on fire, and few news outlets thought it important enough to report.

The Amazon rainforest is on fire

According to CNN, fires are raging at a record rate in Brazil’s Amazon rainforest. Since the National Institute for Space Research (INPE) started tracking these fires in 2013, it’s never been as bad as it is right now. In fact, as we speak, the fire is burning more than one and a half soccer fields of the Amazon rainforest per minute. Take a moment to let that sink in.

Yes, the situation is dire. Scientists are warning that this fire can give our efforts to control climate change a devastating blow. Brazil has been plagued with fires this year, of which more than half were in the Amazon region. In total, there have been 72,843 fires in Brazil this year alone. That’s more than an 80% increase compared to the same period last year.

So many #Climate emergencies worldwide, it's hard to keep up. But #AmazonRainforest burning is stand-out global disaster.
Every red dot below represents a significant fire pic.twitter.com/AZ6IaOO1Pv

Scientists say that even though fires are common in this region during the dier seasons, this fire is anything but normal. The forest is considered to be a vital part of slowing down global warming, but at the rate it’s burning now there soon might not be much left to save us. Not only is the Amazon the biggest provider of oxygen, but it’s also home to an uncountable number of fauna and flora species. Its size is roughly half of the United States, making it the largest rainforest on the planet. We cannot afford to lose it.

What’s causing the increase in fires?

The rise in the number of fires in Brazil’s Amazon region this year is being linked to an increase in deforestation, according to NBC News. Ane Alencar, the science director of The Amazon Environmental Research Institute (IPAM), says that the fires are usually started by an illegal, but still common tactic that includes fire to “clear” an area of the forest. He added that the risk of a fire escaping is always high in these areas.

“There is no natural fire in the Amazon. What is there are people who practice burning, which can worsen and turn fires in the dry season. Even in a less severe drought than in 2016, when we suffered from a very strong El Niño, the risk of fire escaping is high.”

It’s been burning for three weeks

These fires have been raging for three weeks, and the world was only made aware of it this week. Ever since it hit the big news outlets, people have taken to social media to voice their anger and concerns. Dramatic images and videos also appeared showing the giant plumes of smoke rising from the forest.

We don’t inherit the earth from our parents, we borrow it from our children. Our world is dying and this needs the attention it deserves. #PrayforAmazonia pic.twitter.com/mVLR8ymzgh

The Amazonia has been burning for three weeks!

The smoke has traveled as far as Sao Paulo

The fires are burning at an alarming rate, so bad that the smoke has reached all the way to Sao Paulo, which is more than 1,700 miles away. People posted images of skies blackened by smoke on social media.

🌎Just a little alert to the world: the sky randomly turned dark today in São Paulo, and meteorologists believe it’s smoke from the fires burning *thousands* of kilometers away, in Rondônia or Paraguay. Imagine how much has to be burning to create that much smoke(!). SOS🌎 pic.twitter.com/P1DrCzQO6x

Copernicus, the European Union’s satellite program, released a map of the smoke’s path, showing it spreading all along Brazil to the east Atlantic coast, covering half the country and even starting to spill over into neighboring Peru, Bolivia, and Paraguay.

From the other side of Earth, here’s the latest on the Amazonia fires 🌳

People are being exposed to serious air pollution

Another concern is the pollution caused by the smoke and the effect it can have on the people in the affected areas. IPAM researchers issued a warning on Tuesday, saying that the smoke may trigger respiratory problems. Paulo Moutinho, the senior researcher of IPAM, said that the consequences for the population are huge.

“Air pollution causes disease and the economic impact can be high. Combating deforestation, which is a vector of burning, and discouraging the use of fire to clear land are critical to ensuring the health of people and forests.” 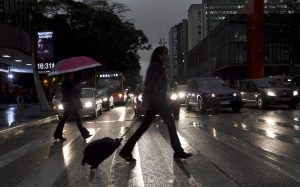 In the meantime, people who are worried about the long-term environmental consequences of the Amazon’s deforestation has started a campaign on social media to create more awareness around the issue, using the hashtag #prayforamazonia. One social media user wrote that it’s heartbreaking that these fires are not receiving much news coverage: “I’m only finding out now that the Amazon Rainforest has been burning for while and it’s so large it can be seen from space, sadly I have not seen much coverage on this, it’s heartbreaking, hoping to bring more attention to it #prayforamazonia.” 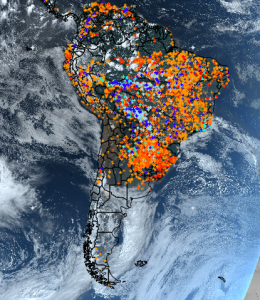 In the meantime, activists are blaming Brazil’s president for the calamity. Environmental groups have been campaigning to save the Amazon rainforest for years. They are pointing the finger at Brazil’s far-right president Jair Bolsonaro for endangering the rainforest, saying that this tragedy has come to pass because he relaxed environmental controls and encourages deforestation.

There was worldwide outcry when the Notre Dame cathedral was on fire. Why is there not the same level of outrage for the fires destroying the #AmazonRainforest? pic.twitter.com/VbSda5PYAK

Bolsonaro’s environmental policies have raised concerns from the start after he made promises to explore the Amazon’s economic potential to restore the country’s economy. Oh well, let’s all just forget about the fact that no great economical growth is going to do anyone much good if we all die from lack of oxygen.

Bolsonaro doesn’t care about the Amazon

There have been people who tried to show Bolsonaro that he’s on his way to cause a global crisis, like the director of INPE, who was fired just weeks ago after he had a spat with Bolsonaro over the deforestation of the Amazon. The director in question defended satellite data that proved that deforestation was 88% higher this June than last year. Bolsonaro called these findings lies and the director was sent on his way.

Now that tragedy has finally struck, Bolsonaro is passing the blame, saying that the fires that are currently raging might have been set on purpose by nongovernmental organizations to put his government under international criticism. Can one person be so self-centered? On Wednesday, he was quoted as saying the following on the matter:

“Crime exists, and we need to make sure that this type of crime does not increase. We took money away from the NGOs. They are now feeling the pinch from the lack of funding. So, maybe the NGO types are conducting these criminal acts in order to generate negative attention against me and against the Brazilian government. This is the war we are facing.”

Nice one, mister. While the Amazon rainforest is dying you’re still focused on stupid politics and money instead of proactively trying to do something about the crisis. It was also noted by many that the president had no evidence to back up these allegations. It seems that Greenpeace wasn’t wrong when it called Bolsonaro and his government “a threat to the climate equilibrium” in July, warning that his policies would bear a “heavy cost” for Brazil’s economy.

What happens if the rainforest is destroyed?

It seems that the environmental organizations’ dire predictions are starting to come true. According to World Wildlife Fund, we’re pretty much doomed if the Amazon doesn’t survive this fire. Should the rainforest be damaged to the point of no return, it could become a dry savannah, which means that most of the wildlife that resided there would disappear. If this happens, it would no longer be the greatest source of oxygen on the planet, instead, it will become the biggest emitter of carbon, which, as we all know, is the main culprit of climate change.

Things aren’t looking very good right now, but we can all do our bit to help. If you feel like you can give something to the cause, head over to Amazon Watch or the Rainforest Foundation to donate to the cause.