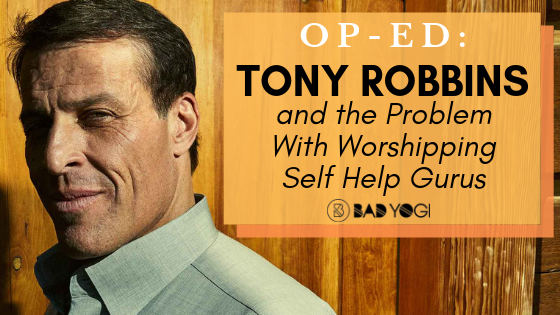 Op-Ed: Tony Robbins and the Problem With Worshiping Self Help Gurus

Tony Robbins has been the king of self help for decades, having worked with celebrities like Princess Diana, Bill Clinton, and Serena Williams. To attend one of his famous seminars, such as Date With Destiny will set you back upwards of $5,000. His books are massively successful, and he has won legions of fans from all over the world. That’s quite a lot of power for one person to have and using that power irresponsibly can have disastrous consequences.

A recent investigation by Buzzfeed News has uncovered some shocking accusations about the self help guru. The article states, “A yearlong investigation by BuzzFeed News, based on leaked recordings, internal documents, and dozens of interviews with fans and insiders, reveals how Robbins has berated abuse victims and subjected his followers to unorthodox and potentially dangerous techniques. And former female fans and staffers have accused him of inappropriate sexual advances.”

Robbins immediately went on the defensive, writing an article on Medium entitled, “An Open Letter to BuzzFeed Editors and Board of Directors from Tony Robbins.” In that letter he writes, “What stands out — even in today’s sea of mis-representation and journalistic corner-cutting — is the 2014 report by the industry-standard, non-partisan, Pew Research Center which cites Buzzfeed as “the least trusted news source” of them all. So, it stands to reason that you are presently facing financial, organizational, and management troubles. BuzzFeed is unapologetically fueling the current cultural divide by targeting well-known individuals with false allegations to boost its readership and serve its shareholders.”

So, basically, Tony was not happy.

I was a fan of Tony Robbins for years, and considered him to be one of the best motivational speakers of all time. His charisma, his attitude, the lack of fear he had in telling people like it is, and his deep voice that made me want to jump up and run a marathon while simultaneously starting a business and having a baby made me wish I understood the world like he does. He helps people through trauma, depression, anxiety, and any other problems they may be having with the kind of confidence that makes you scared to question him. It’s easy to feel like if you’re not drinking the Kool-Aid that you will end up a failure in life or not as enlightened as he claims to be.

In a recording mentioned in the Buzzfeed article, Robbins can be heard talking to a woman who was previously in an abusive relationship and his response left me furious, as a victim of abuse myself. He made comments such as, ” She likes to call it emotional abuse. What the fuck is emotional abuse?” and “Has he put up with you when you’ve been a crazy bitch?” Not only was I angry, but I started questioning why I was listening to this one human being as if everything he said was fact, rather than asking myself how I felt, what would help me grow, and if he was even correct in his views.

The allegations of sexual abuse, racism, and berating abuse survivors are not the only thing that could be his downfall. It’s the power, the feeling of being untouchable that may send him on a downward trajectory. Just as we shouldn’t automatically assume the accusations are true, it seems Robbins followers are jumping to his defense before knowing these allegations aren’t true.

Some of the comments on Instagram were, “Haters mean your doing something right. Thanks for everything you do man,” and “No one believes them.” While it’s important to not assume that everything you see written is absolute truth, especially when Robbins has not been found guilty of anything, it would behoove us all to ask ourselves why it’s so difficult to see that such a powerful person isn’t who we thought they were or why we’ve given them so much power in the first place.