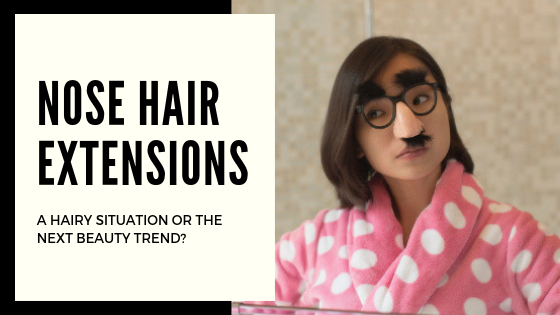 Nose Hair Extensions: A Hairy Situation or a Beauty Trend?

Beauty trends tend to get somewhat crazy sometimes, and recently an old trend that was somewhat, erm, weird, resurfaced. Whether it will stick is another thing entirely. Behold: nose hair extensions – and yeah, it’s pretty much as crazy as it sounds.

If you haven’t been all that informed about what was going on in the world in 2017, you might’ve missed the #nosehairextensions trend that did the rounds on Instagram. According to Today, it all started when Instagram user @gret_chen_chen posted a photo of herself in which she glued fake eyelashes to the base of her nostrils. Other beauty fans soon started doing the same, and the trend went a bit viral, but died soon after. It makes sense that it did, because how the heck do you even maintain nose hair extensions? What if you have a nasty cold and really need to blow your nose? We don’t really want to start imagining the possibilities.

After @gret_chen_chen’s photo, many others started posting similar pictures where they were trying out the trend.

Some even made video tutorials.

I Tried the Nose Hair Extension trend so that you don’t have to. (See full video on my YouTube channel) #nosehairextensions

The trend died out soon after it started, probably because winter was approaching fast and with winter comes the flu, but in 2018 it had a brief revival.

This odd beauty trend seems to be making a comeback

Now, this odd trend seems to be making a bit of a comeback. According to Health, the hashtag #nosehairextensions has been used over 400 times on Instagram and one video racked up over 147,000 views. Either the person who posted that video has a lot of very good friends who went click happy, or people are actually interested in this weird trend. Then again, people being interested in it does not necessarily mean that they’re going to embrace it, which, according to TooFab, is exactly the case.

The pictures bearing the hashtag #nosehairextensions, which are currently doing the rounds on Instagram, are apparently mostly reposts of the pictures from 2017. Well, there must be a reason people are reposting them to begin with, right? Then again, we’d be lying if we said that we wouldn’t be just a little relieved to find that this is not about to be a trend at all.

All in all, it doesn’t seem like we’d be seeing nose hair extensions on catwalks anytime soon, which probably means that we won’t be seeing it on the streets either. But hey, to each his own. If you like the look, rock it, we won’t judge.

Have you ever tried this trend? Tell us in the comments.