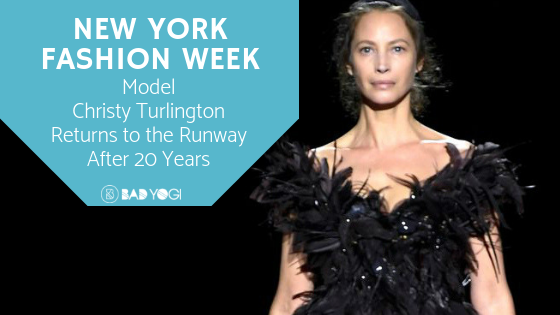 If you’re a fashionista or just have a general interest in fashion, you probably know the name Christy Turlington. She was the face of Calvin Klein’s Eternity campaign way back in 1989 and once again in 2014. She also represents the famous beauty brand Maybelline. Turlington might have been absent from the runway since the ’90s, but with New York Fashion Week in full swing, she has made a surprise appearance – and she’s clearly not lost her strut on the runway.

Harper’s Bazaar reported that Turlington made a surprise appearance when she closed the Marc Jacobs Fall 2019 show, making her first appearance on the catwalk in over 20 years. The last time she was strutting her stuff on the runway for Marc Jacobs was back in 1993. 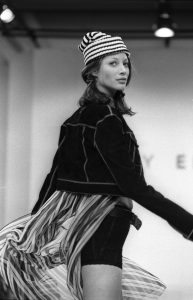 Back then, Turlington was modeling Jacobs’ famous grunge collection for Perry Ellis. The look she returned with, however, was quite the opposite. Dressed in a black feather cocktail dress with a matching fascinator and black leather boots, her grand return’s look was anything but grunge. It kind of makes one think of a “Black Swan”-inspired gown with just a touch of glam. This look will probably be one of the new trends that we’ll see taking over the fashion world in 2019. 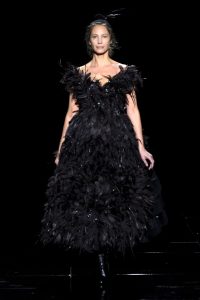 Christy Turlington made her first appearance on the runway after more than 20 years at the Marc Jacobs Fall 2019 show.
Image: WWD/REX/Shutterstock

What made her decide to return to the runway?

Turlington’s return to the runway marks a month since her 50th birthday and many wondered what has sparked her sudden decision to return to the catwalk. Turlington revealed all on her Instagram page, saying that since she’s turned 50, she’s come to a place in her life where when she asks herself questions, the answer that comes up is “Why the F not?” Her daughter Grace,  who is only 15 years old, also played a major part in Turlington’s decision. She says that she really wants to be seen and heard by her daughter and modeling is a medium that speaks to Grace – the apple clearly does not fall too far from the tree.

Turlington also used the opportunity to thank the young models of today, mentioning the likes of Karlie Kloss, Gigi Hadid, and Kaia Gerber. She had the opportunity to meet them when she walked at Marc Jacobs and said that they are the type of women she wants her daughter to look up to. Getting a compliment this great from a model who has been in the industry for years must definitely be a huge honor.

About tonight! OMG @themarcjacobs invited me to close his beautiful show tonight and I couldn’t resist. A. I have known and loved this man since I met him at age 16. B. I turned 50 this year and have arrived at a place where “Why the F not” is the answer that comes up when I ask myself questions. C. I have a 15 year old daughter who I desperately want to see and hear me and this is a medium that “speaks”to her. So, thank you’s are in order, @karliekloss @gigihadid and @kaiagerber and all the lovely young women I have met briefly in the recent past or met tonight. You are ALL women I would want my daughter to emulate in your grace, confidence and elegance. Always reassuring to have @guidopalau @diane.kendal @stephenjonesmillinery and @kegrand encouraging you on and making you look and feel your best. And while that muscle did not hurt as much as I would have thought to exercise again, after 20 plus years, I am not certain I could beat the experience of tonight or wish to try! Now I can say exactly when and for whom I last walked a runway and feel so proud and grateful to all the forces of nature who made it possible! 😘@1.800.newbold & Congratulations for all of the amazing people who put shows like this together. I am in awe of the efforts I was able to witness firsthand and truly appreciate from a new perspective over the last couple of days all the effort that goes in. Bravo!

Willow Smith made her runway debut

Speaking of young women, Yahoo Lifestyle reported that Turlington wasn’t the only one who made a surprise appearance. 18-year-old Willow Smith also made her first-ever runway debut at the same show. The daughter of actors Will Smith and Jada Pinkett Smith is no stranger to fashion shows – she’s attended them for a long time and this year, she finally got the opportunity to walk the runway as one of the show’s models. This is just proof that dreams do come true, right? Smith was wearing an extravagant black and white polka dress topped with dramatic shoulders, which made her debut anything but ordinary. 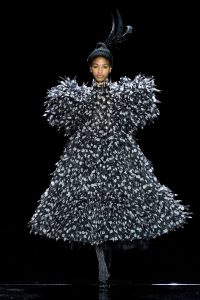 Willow Smith made her debut appearance on the runway at the Marc Jacobs Fall 2019 show.
Image: WWD/REX/Shutterstock

Age is just a number baby

Marc Jacobs is known for closing his shows with a bang, and this year was no different. Turlington’s return to the runway at the age of 50 can also serve as an inspiration to us all to remember that it is never too late to do anything and that your age doesn’t have to define you. Here’s to embracing your age and strutting your stuff even when everyone thinks it’s way past your time to do so.