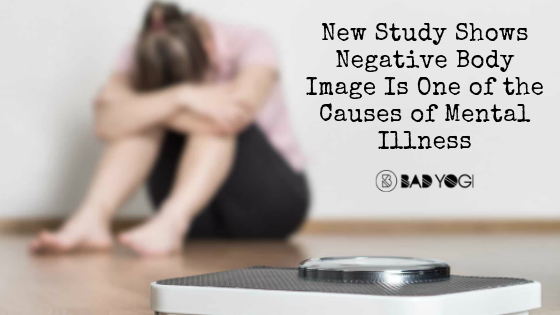 May is Mental Health Awareness Month, and we’re currently in the midst of Mental Health Week. It’s great that we have all these campaigns that are trying to erase the stigma surrounding mental illness, because we’re in dire need of solutions, as a recent study in the United Kingdom proved.

What is the cause of the rising numbers of people who struggle with mental health?

Mental health is a worldwide problem, and unfortunately, it’s growing. It seems that society needs to take a long, hard look in the mirror and figure out where the problem lies. Is it social media? Is it the demands of daily life? Is it the fast-paced life we’re currently living? There are so many questions, but it’ll take a while to find good answers. A new study that had been done in the UK seems to have found some answers as to what causes suicidal thoughts among adults  – and the findings might surprise you.

According to the Independent, the UK study found that millions of British adults have experienced suicidal thoughts due to their body image. Whoa. We know that accepting our bodies can be really hard sometimes, but having it come to a point where people hate their bodies so much that they start to consider suicide is a problem that needs to be addressed as soon as possible.

The study was done by the Mental Health Foundation, and it polled 4,505 adults in March. The results revealed that one in eight of them had considered taking their lives at some point because of negative feelings towards their bodies. Those who said that their body image made them feel anxious or depressed made out more than a third of the respondents. It gets worse – 20 percent of the respondents said they were ashamed of the way they looked and 19 percent said that they were “disgusted” by their bodies. 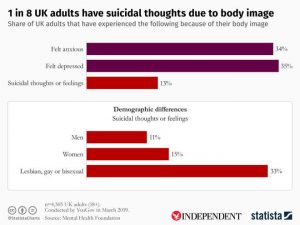 Is social media to blame?

These statistics don’t paint a pretty picture. So where do we start looking for the cause? The media has always been a huge culprit when it comes to body image for both men and women. The models on the front pages of magazines have never painted a realistic picture of what “normal” people look like. Then came social media, and the world population was suddenly bombarded with more misleading images than ever before – and it was readily accessible. With “perfect people” no longer being confined to the pages of a magazine, it seems that people’s self-esteem is lower than ever – and the study proved this to be true. 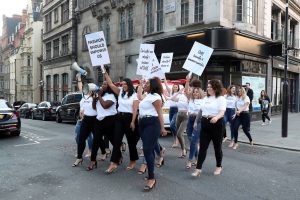 The study showed that social media and the images that are used in advertising play a big part in how people perceive their own bodies. Half of the 18 to 24-year-olds who took part in the polls said that they blame social media for the negative feelings they experience toward their bodies. Only one in five said that social media didn’t have a hand in their low self-esteem.

Suicide in the United States is on the rise

Meanwhile, in the United States, suicide is one of the ten overall leading causes of death in age groups 10 to 64, as stated in a study published by the Centers for Disease Control and Prevention in 2016. According to Harvard Health Publishing, there was also a 200% increase in suicides among girls aged 10 to 14 between 1999 and 2014. The main cause? Depression. It’s hard to pinpoint what exactly causes depression in girls this young, but the study done in the UK seems to point to one big culprit, and the Mental Health Foundation wants to take a proactive stance and make sure that these numbers stop growing and start decreasing.

Mark Rowland, the CEO of the Mental Health Foundation, said that a large number of people who took part in the survey felt that the government needed to take more action when it comes to how body image is being portrayed in the media. With these new findings now out in the open, Rowland says that his organization is trying its best to get the Advertising Standards Authority (ASA) to consider censoring advertisements from high-risk industries, such as weight loss services and cosmetic surgery companies. 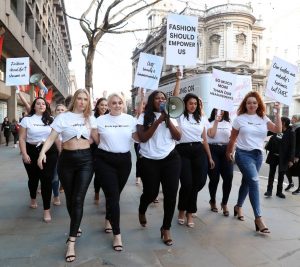 Perhaps it’s time we all start our own mini-revolution to cut out the noise from social media and start accepting our different bodies.
Image: Getty Images

The charity is also directing its attention to social media, which seems to be the main culprit. Rowland says that the charity is encouraging social media companies to sign the Be Real Campaign’s Body Image Pledge. This campaign aims to encourage companies to feature a diverse range of body types on their platforms, which in turn will promote body positivity.

There have been some positive changes on social media

These days, there seems to be a bit of a change in social media circles – many people are dedicating their Instagram pages to show “real” bodies, and many social media users have applauded these efforts. Looking at brands like Aerie, we see women of all shapes and sizes being featured on their Instagram page. Ask anyone about Instagram accounts they’d recommend that promote body positivity, and you’ll find that most of them are brands and people that feature men and women with bodies everyone can relate to.

Stop giving social media the power to destroy you

If social media has the power to make people feel so bad and insecure about their bodies that it drives them to suicide, imagine what it could do if the current narrative started to change. Let’s not deny it – social media has power, a lot of power. It’s high time we start using that to our advantage instead of letting it drive us over the cliff of self-hate and depression.

Over to you: have you ever hated your body because of the way social media presented “perfect bodies”? Any awesome accounts you follow that encourage body positivity? Drop them below!