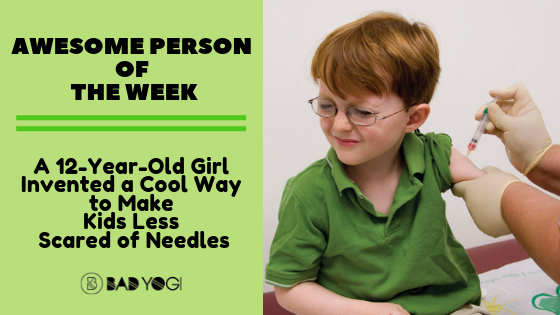 Awesome Person of the Week: A 12-Year-Old Girl Invented a Cool Way to Make Kids Less Scared of Needles

Let’s be honest: Most of us quiver at the thought of having a needle stuck into us. Some doctors like to joke about having to catch their patients first before they’re able to inject them, while some doctors even admit to being scared of those long, pointy objects themselves. One can only imagine how scared most kids must be of needles, and sometimes, they’re the ones who need to be injected regularly because of some sort of ailment. 12-Year old Ella Casano is one of them, and she found a way to make needles a whole lot less scary.

According to CNN, Casano, who is from Connecticut, has been visiting the hospital regularly since she was seven. She suffers from an autoimmune disease called Idiopathic Thrombocytopenia Purpura (ITP). This disease causes the body to destroy its own platelets, which puts a person at a higher risk for bleeding or injury. Casano has to get IV infusions every six to eight weeks to treat this condition. Like any other kid, she was scared of the process and dreaded it every time. She admits to being very intimidated by all the tubing and medical equipment on the IV pole and after eventually overcoming her fear, she came up with an amazing idea to help kids in similar situations.

After years of having to look at all the intimidating tubes and medical equipment, Casano realized that disguising it might be a good idea. She didn’t need much to set her project into motion – she cut up a stuffed teddy bear, got out her glue gun, and created the very first Medi Teddy. The Teddy serves as an IV cover, covering all of the intimidating equipment that used to scare her so much when she was younger. It’s a simple, but brilliant idea and it’s absolutely crazy that no one thought of it before. 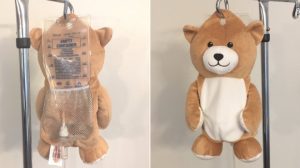 The teddy has mesh at the back so that doctors can still monitor the medicine that is given to the patient.
Image: CNN

When Casano showed the Medi Teddy to the nurses, they were super impressed and delighted by her idea. She went on to create a few prototypes for them to test and give feedback on. She eventually adjusted the design so that the teddy has mesh at the back. This way, doctors can still monitor the status of the medicine the patient is receiving, while the kids still have a friendly face to look at.

Even the doctors love it

Dr. Rebecca Pillai Riddell, assistant vice president of research at York University, says that, from a child’s perspective, a hospital can be a very scary place. She loves the idea of the Medi Teddy because it is something children can recognize within their scary surroundings. This, in turn, helps them to feel less intimidated. She is positive that the Medi Teddy will be able to reduce the stress many children experience when visiting the hospital and undergoing procedures.

Now, Casano’s mother, Meghan, is helping her to turn Medi Teddy into a non-profit organization. They launched a GoFundMe page to raise $5,000 to place their first order of 500 units. According to Today, they raised nearly $15,000 in a week. All of the Medi Teddies will be given to kids at no cost. 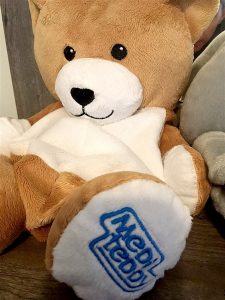 The Medi Teddy will be given to kids at no cost.
Image: Meghan Casano

Meghan says that the response has been overwhelmingly positive. She is very happy with their product and believes that it will help hundreds of kids. Casano is also very delighted with how well things have turned out: “We’ve been getting a lot of positive feedback. It makes me feel really good because I know I’m actually helping people with it.”

There’s nothing better than helping out kids who feel scared when they have to visit the hospital. Casano’s Medi Teddy truly is a wonderful invention that’s sure to delight many kids and make their visit to the hospital less scary and intimidating.