McDonald’s is taking their business to the next level – they just opened the smallest store ever, and everyone, including those it was built for, is literally buzzing with the news.

The new store wants everyone to “bee” happy

Today reports that this new, very small, and truly unique store is located in Sweden and was designed by NORD DDB, a Nordic creative agency. The store has two drive-thru windows and is outfitted with an al fresco patio and sleek wood paneling. It might be the smallest McDonald’s to date, but it actually has room for thousands of guests – and no, there’s no sorcery present here.

You’re probably wondering how the heck the smallest McDonald’s store ever could possibly host so many guests. Well, it’s because it’s actually been built for very small guests – the new store is called a McHive, and yes, the thousands of guests are bees. How incredibly cool is that?

McDonald’s just opened a tiny restaurant for bees — here’s what it’s like inside https://t.co/eZwlM5ucTj

The agency that built the hive says that many businesses in Sweden are starting to do their part to aid in the survival of bees. Several franchises across the country had already installed beehives on the roofs of their restaurants. They have also started to replace grass patches around businesses with flowers and plants – all for the bees. 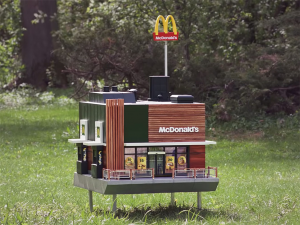 The smallest McDonald’s store ever has been custom-built for bees.
Image: NORDDDB/YouTube

It’s amazing to see businesses taking care of the environment as well – as we all know, bees are a crucial part of the ecosystem and without them, nothing would survive for long. They should be treated like royalty – and we’d say giving them their very own McHive is a good start. 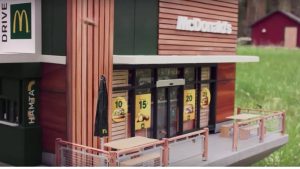 The McHive looks exactly like a mini McDonald’s – it even has ads in the windows.
Image: McDonald’s / Via youtube.com

The McHive forms part of a global initiative

The new McHive actually forms part of a new global initiative to save the honey bee population. Their numbers have decreased significantly due to a variety of factors, but experts say the main culprits are the overuse of pesticides and a lack of wildflowers to pollinate.

According to Travel and Leisure, the McHive was built in honor of World Bee Day that takes place annually on May 20. The beehive was set to be auctioned off on Tuesday, and all the proceeds will benefit the Ronald McDonald House charities. The marketing director of McDonald’s Sweden, Christoffer Rönnblad, said that it feels good to form part of the initiative to save the bees.

“We have a lot of really devoted franchisees who contribute to our sustainability work, and it feels good that we can use our size to amplify such a great idea as beehives on the rooftops.” 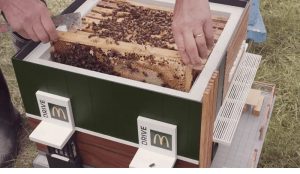 The McHive has space for thousands of bees.
Image: McDonald’s / Via youtube.com

The smallest McDonald’s for humans

After the news of the McHive hit, people headed over to social media to share the smallest McDonald’s stores out there for humans, and the size of some was quite surprising.

When do small become too small? How do they fit a kitchen in there?

Someone also posted an image of a kiosk type of McDonald’s that is a bit on the larger side and also looks pretty cool.

#smallestmcdonalds in the world? Hong Kong.

Will the McHive come to the US?

It’s not yet clear whether McDonald’s will bring the McHive over to the U.S., but it would be really cool if they did. We’d totally go to the auction to try and see if we can get our hands on it, but if you’re low on money and high on creativity, you could probably try and build your own. The bees will thank you for it. There is, however, no doubt that the bees are not complaining about their new home, in fact, we think they’re lovin’ it. 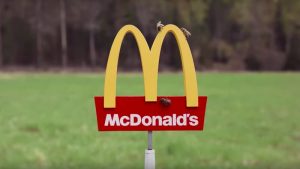