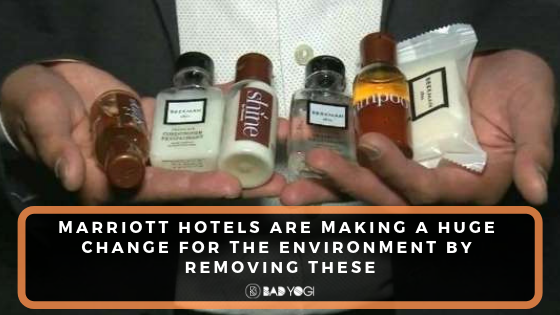 For those who love to collect tiny shampoo bottles from hotels, you better start collecting them like a crazy person for the remainder of this year, because they’re not going to be around much longer.

ABC News reports that Marriot International, the world’s largest hotel chain, is going to do away with all tiny plastic bottles worldwide by December 2020. Yeah, folks, it’s happening, and although some of us will miss keeping those as memorabilia, this is a great leap forward in lessening plastic waste.

These small containers will be replaced by something more sustainable, like wall-mounted dispensers. What you’ll find as a replacement will, of course, depend on the hotel. 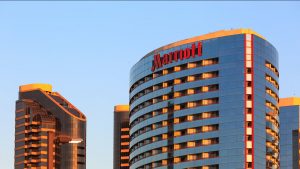 The hotel giant has wanted to do away with plastic for a while now.
Image: Getty Images

Marriott is not the first hotel company to do this

This announcement comes after IHG, which owns Holiday INN, Kimpton and other brands, said that it’s going to do away with the tiny hotel-style bottles. The company said that this will enable it to eliminate about 200 million tiny plastic bottles every year by 2021. Yikes, can you even believe that number? This is a clear indicator of why these need to disappear ASAP. Even Walt Disney Co. jumped on the plastic-free wagon last year, saying that it was going to replace the small plastic shampoo bottles at all its resorts an cruise ships. Smaller companies, like Soneva Resorts in Thailand and the Maldives have also sworn off plastic.

The fact that a massive company like Marriott is trying to reduce its plastic waste is amazing. To give you a general idea of how big an impact this is going to have – more than 7,000 hotels in 131 countries under 30 brands will be ditching these plastic bottles. That will amount to the elimination of almost 500 million small bottles every year, which adds up to 1.7 million pounds of plastic. Yeah, it’s crazy, but we’re so glad that these companies are finally stepping it up and taking the responsibility to ensure that they do their part in saving the planet.

Why it took so long

You might be wondering why only some hotels are ditching plastic. Well, it’s not that easy to just do away with it. Marriott has wanted to get rid of plastic in its hotels for years, according to its CEO Ane Sorenson. The thing is, it takes a lot of time and effort to design large tamper-resistant bottles and to get the suppliers on board with the idea. Sorenson added that they still wanted the bottles to look luxurious, saying, “There were a lot of technical features to this that we had to get right.” Well, to be honest, these days we feel like anything that doesn’t come in plastic is luxurious. 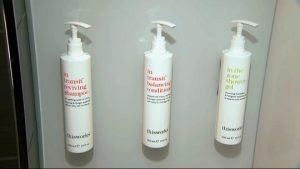 The tiny bottles will be replaced by bottles similar to these.
Image: AP Photo/Dan Huff

Some of Marriott’s hotels have actually started to replace these small bottles as early as last year, like the Bethesda, Maryland-based Marriot that implemented it at some of its North American brands, which included the Courtyard and Fairfield hotels. Almost 1,000 of those hotels have now permanently implemented larger bottles or pump dispensers hooked to the shower wall.

Guests are becoming more aware too

Marriott’s vice president of sustainability and supplier diversity, Denise Naguib, says that the company has gotten a very good response from guest surveys. Many of them actually said that the larger bottles are a relief because they now get to use as much or little shampoo as they want. According to Naguib, guests are becoming more conscious of how plastic is affecting the environment and don’t want to leave half-empty bottles behind.

Another company following the same route is Rival Hyatt Hotels Corp. The company has been testing its amenity dispensers in some of its hotel rooms for the past year.

The cutoff date for the change is next year

This is amazing progress and Marriott actually has a cutoff date for when most of its hotels need to have eliminated all small plastic bottles – July 1, 2020. Luxury brands have until the end of 2020. As for what the new designs will look like, lower-priced brands will have dispensers or bottles tethered to the shower wall while luxury brands will have untethered bottles. These bottles will be anything but small, holding the amount you’d get from 10 to 12 of the small bottles. All of them will be tamper-resistant.

There is a downside though

The only downside to this is that the larger bottles will still be made of plastic and will be replaced, not just refilled, but Naguib says that these will be much easier to recycle than the smaller ones. We would’ve loved for them to make use of something else than plastic, but we’ll take it for now. One of the main reasons Marriott wanted to do away with its small plastic bottles in the first place is because they are actually quite hard to recycle. Before they can be recycled they have to be cleaned out, and that takes a lot of time. 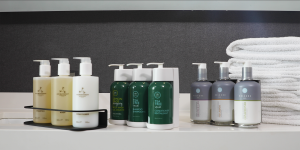 Environmental groups welcomed the news, saying that the time has come to reuse instead of simply disposing plastic products. Dianna Cohen, co-founder and CEO of the Berkeley, California-based Plastic Pollution Coalition, said, “Plastic pollution is an urgent global crisis and the time is now to think ‘reusable’ instead of ‘disposable.”

New laws are being made

In the near future, hotels might not have a choice in this matter anymore, especially those in California. The state’s lawmakers are considering banning the use of these tiny bottles by 2023. The European Union is also hard at work to implement change – by 2021, a wide array of single-use plastic items, like plates and cutlery, will be banned.

We all need to sacrifice something to save the planet

Sorenson says that he isn’t expecting all customers to accept these new changes without complaint, adding that Marriott had received many complaints last year after banning plastic straws and stirrers. He says that he can understand that some people like to collect hotel shampoo bottles because his own mother used to collect soap she got at hotels, but people need to understand that change is imminent. “Human nature is what it is and we resist change, but people understand that this is so much better,” Sorenson says.

We don’t know about you, but we’re thrilled by this news. Every company that tries to do away with plastic or goes the extra mile to make it reusable is a great leap forward in the battle against plastic. Yes, sometimes drinking through a paper straw isn’t all that glamorous, but what is a small inconvenience compared to all the ocean life you’re saving in the process? We made this mess, it’s about time we start making some sacrifices to clean it up.