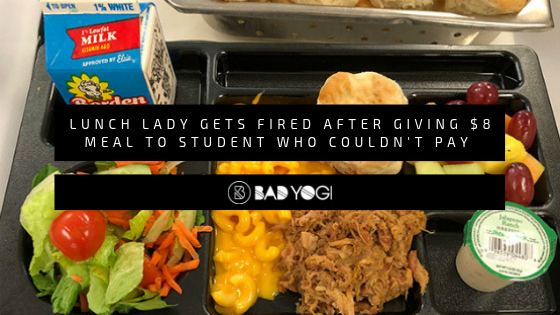 We’re used to celebrating acts of kindness, so when a New Hampshire lunch lady was fired after she gave an $8 meal to a student who couldn’t pay, people were understandably upset. What’s even worse is that she’d been working at the Mascoma Valley Regional High School for four years, and just because she was trying to do a kind thing, she lost her job.

Fired for trying to be kind

Buzzfeed reports that the lunch lady, Bonnie Kimball, actually knew the boy who couldn’t pay, so she asked him to bring the money he owed the following day. He did indeed return with the money the next day, but Kimball was still fired.

After the news spread, school families and people all around the country voiced their protest, so much so that Kimball’s company offered her her job back, which she declined. Kimball, much like the rest of society, wasn’t very happy with them, saying that the only reason they were offering to give her her job back was because of the negative media coverage – not because they were actually sorry about the way they handled the situation. She added that it made her sad that the incident had received so much attention because it had been a simple act of kindness.

The vendor providing the school lunches, Café Services, had also told its employees to not make any fuss if a student couldn’t pay for their lunch because its contract was up for renewal. Clearly, they hadn’t meant it. In a statement, the vendor said that Kimball had violated its policies and was therefore fired.

It’s true that Kimball was in a bit of a sticky situation – no one wants to deny a child a meal, that just seems inhuman, and she clearly knew that the boy was going to bring the money he owed, which he did. The whole situation led to the school district issuing a statement, saying that they will be working with the vendor and its employees to prevent any similar situations in the future. The statement added that about a third of the students in the district receive free meals at schools because of their parents’ income and that they would never refuse a child a meal. Free meals provided include a daily entrée, milk, fruits, and vegetables, but excludes extra items that are not considered as “essential nutrition”, like sports drinks and chips.

A food service company denies firing a NH lunch lady for feeding a student who couldn’t pay despite a memo that appears to say precisely that. School officials say Bonnie Kimball should have provided the “meal of the day” instead of a la carte items. https://t.co/hUluVkHsbo pic.twitter.com/83iHtWtmjO

Preventing similar situations in the future

Superintendent Amanda Isabelle addressed parents’ outcry surrounding the termination of Kimball’s job, saying that the school district needs to take responsibility for the people who work in schools.

“As a school district, we understand the importance of rules and procedures, but upon reflection, I have become sufficiently convinced that it is wrong of us to assume that all the responsibility falls to the vendor, and I do not believe our communities would accept that explanation of this situation. We must be accountable for the people who work in our schools.”

Clearly, there is still a lot of work that needs to be done in order to prevent situations like the one Kimball found herself in. Hopefully, the correct procedures will be put into place to prevent similar incidents.

In the meantime, we hope that Kimball will find another job where she can continue to show kindness to others. It’s true that she took a risk by giving a child a “free” meal – the fact that she put her job on the line to do so says a lot about her. We really shouldn’t live in a world where kindness costs you your job. It was one time, and it was one meal, it surely wouldn’t have left the vendor bankrupt. Let’s hope that this is the last time someone has to pay with their job for a simple act of kindness.

Over to you: do you think Kimball did the right thing? Drop your thoughts in the comments.

Leave a Reply to AmberLynn Cancel