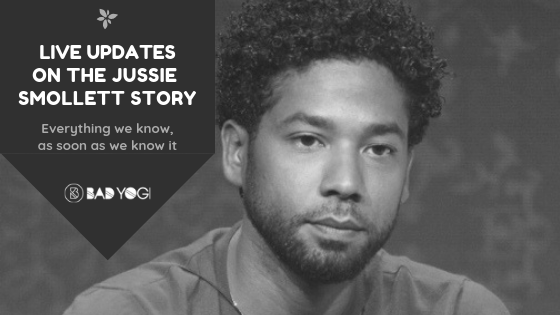 We’ve been reporting on this story since it originally broke in late January that Jussie Smollett had allegedly been the victim of a hate crime. Sadly, the alleged hate crime on “Empire” actor Jussie Smollett has taken a dramatic turn – HuffPost reports that Smollett has been taken into police custody and is set to have a hearing later this afternoon.

What we know for now:

Jussie Smollett was set to have a hearing in court yesterday afternoon and was released on bail.

Smollett’s lawyers condemned the proceedings on Thursday, saying that it was an organized law enforcement spectacle that had no place in the American legal system. They also released a statement in which they said that Jussie’s right to be innocent until proven guilty has not been respected. “The presumption of innocence, a bedrock in the search for justice, was trampled upon at the expense of Mr. Smollett and notably, on the eve of a mayoral election. Mr. Smollett is a young man of impeccable character and integrity who fiercely and solemnly maintains his innocence and feels betrayed by a system that apparently wants to skip due process and proceed directly to sentencing,” the statement read.

More information has been released by the police

“Empire” is cutting Smollett’s character from the final two episodes

Fox News reported that the show’s executives announced today that Smollett’s character won’t be appearing in the final two episodes of the current season.

The show’s co-creators, Lee Daniels and Brett Mahoney, along with the executive producers, said that the allegations are very disturbing but that they are placing their trust in the legal system. They did not pass any judgment on the actor’s current situation and said that everyone at the show cares for him. “The events of the past few weeks have been incredibly emotional for all of us. Jussie has been an important member of our ‘Empire’ family for the past five years and we care about him deeply,” they said in a statement.

Their statement also addressed the removal of Smollett’s character from the show. “We are also aware of the effects of this process on the cast and crew members who work on our show and to avoid further disruption on set, we have decided to remove the role of ‘Jamal’ from the final two episodes of the season,” the statement read.

Some of the Democrats have voiced their disappointment

Kamala Harris, a California Senator, expressed her disappointment and frustration on Twitter over the turn Smollett’s case took.

Like most of you, I’ve seen the reports about Jussie Smollett, and I’m sad, frustrated, and disappointed. pic.twitter.com/91OHOymShi

To no one’s surprise, Trump jumped on Twitter as soon as the news broke, addressing Smollet directly by using his Twitter handle in the tweet. He condemned him for insulting MAGA and accused him of racist and dangerous comments.

.@JussieSmollett – what about MAGA and the tens of millions of people you insulted with your racist and dangerous comments!? #MAGA

Fellow “Empire” actor Terrance Howard is standing up for Smollett

CNN Entertainment reports that while the rest of the “Empire” cast have been very quiet about Smollett’s arrest last week, fellow actor Terrance Howard voiced his support. Smollett plays Howard’s son, Jamal, on “Empire”. Howard shared a post on Instagram where he assured Smollett that he still believes in him and is supporting him all the way, posting a video of Smollett playing with a baby on his lap, captioned “All your lil homies got you. We love the hell outta you”

After numerous fans voiced their doubts over Howard’s unwavering support, he told them that the Jussie he knows would never do what he’s currently being accused of. He wrote a lengthy reply to all the doubters: “Sorry you feel that way but that’s the only Jussie I know. The Jussie I know could never even conceive of something so unconscious and ugly. His innocence or judgment is not for any of us to decide. Stay in your lane and my lane is empathy and love and compassion for someone I’ve called my son for five years. It’s God’s job to judge and it’s ours to love and hope, especially for those that we claim to have loved.”

Howard’s response is definitely something we all can consider whenever someone’s innocence is being doubted. It is not our place to judge, and with so little information available, we don’t have much to go on anyway.

Tons of rumors are doing the rounds

Tabloids have been going crazy with the case, and the New York Post reported that Smollett allegedly has proof that the attack was not fake. Whether these claims are to be believed remains to be seen.

In short, it is rumored that the infamous $3,500 cheque Smollett wrote was for a training session he had with his personal trainer, who the police have identified as one of his “attackers”. Apparently, the memo line of the cheque read “5-week Nutrition/Workout program (Don’t Go)” This is allegedly the cheque police claimed as evidence that Smollett paid the brothers to stage the attack.

Smollett was apparently going to be filming a music video for his song titled “Don’t Go” on February 23 and was trying to get in shape for it. There are allegedly text messages between him and Abel Osundairo dating from January 20 where they discuss his meal plans, as well as a text on the day of the attack where Abel reminds him to get his workout in before he starts his travels. Although this might make sense, leading news outlets have not reported on any of this, which means that for now, no one knows what’s really happened, except for Smollett.

Smollett’s next court date has been set

CNN Entertainment reports that Smollett is set to appear in court again on March 14. Hopefully, more answers will be provided to everyone’s burning questions at that stage. For now, all we can do is speculate.

Jussie Smollett has been indicted on 16 felony counts

Smollett has already pleaded not guilty to the first disorderly conduct charge against him. He is set to appear in court again on March 14.

What must be the weirdest and most confusing story of 2019 so far has finally come to a close. CNN reports that all charges against actor Jussie Smollett have been dropped.

This dramatic turnaround comes after the case’s facts were reviewed by the Cook County State’s Attorney’s Office. In a statement, the state’s attorney’s office said that dropping the charges is an appropriate resolution to the case.

“After reviewing all of the facts and circumstances of the case, including Mr. Smollett’s volunteer service in the community and agreement to forfeit his bond to the City of Chicago, we believe this outcome is a just disposition and appropriate resolution to this case.”

Smollett’s attorneys said that parts of the case will be sealed and still insisted that the attack was not a hoax and that misinformation is what led to the rush of judgment against Smollett.

Chicago’s mayor and the city’s police superintendent was not very thrilled with the latest developments, with both still claiming that the attack was a hoax to promote Smollett’s career. Rahm Emanuel, the mayor of Chicago, called the prosecutor’s decision a “whitewash of justice.”

“From top to bottom, this is not on the level. You have a person using hate crime laws that are on the books to promote himself. Is there no decency in this man?”

“If you want to say you’re innocent of the situation, you take your day in court. … I would never hide behind a brokered deal in secrecy, period.”

Smollett is ready to put everything behind him

Smollett briefly appeared in a Chicago courtroom earlier today and after the charges were dropped, he told reporters that he was thankful for everyone who has stood by him through the past few weeks. He emphasized that he wouldn’t have put his family “through a fire like this” for a lie. He added that he’d been consistent and truthful from the first day and that he wouldn’t be his mother’s son if he was capable of what he’s been accused of. He also said that he would now like to move on with his life and will continue to fight for equality, justice, and the betterment of marginalized people everywhere. He also extended his thanks to everyone everywhere who kept believing in him.

“I want to thank my family, my friends, the incredible people of Chicago and all over the country and the world who have prayed for me, who have supported me.”

Chances are good that a lot of us hadn’t seen this sudden change in the case coming. We’ll probably never know what exactly happened on January 29. All we can hope for is that this case won’t cause hundreds of other hate crimes to go unreported because of all the stigma that surrounded this one.

What are your thoughts on all this? Did Jussie basically get away with murder here or has he been innocent from the start? Sound off in the comments!