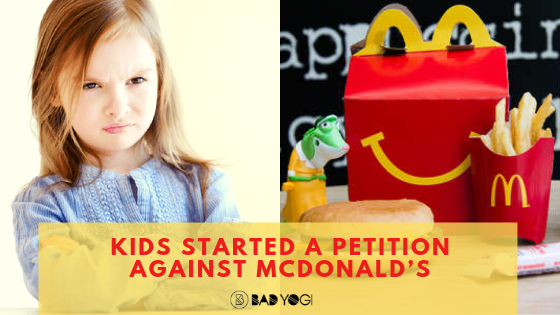 Kids Started a Petition Against McDonald’s

These days, plastic seems to be in the news all the time for all the wrong reasons. We all know the story by now – it’s bad for the environment, especially for our oceans, and now it seems that the younger generation is starting to take notice as well and trying to do their part to bring about change.

The younger generation is taking note of the plastic problem

Remember when you were a kid and you couldn’t wait for your parents to treat you to your next Happy Meal at McDonald’s? Well, the younger generation of today is no different, but they are more informed about how bad those plastic toys and its packaging are for the environment. Today reports that sisters Ella and Caitlin McEwan, aged 9 and 7, started a Change.org petition after they learned of the massive negative impact plastic has on the environment. The petition’s goal is to get McDonald’s and Burger King to stop giving away toys made of plastic in their kids’ meals. 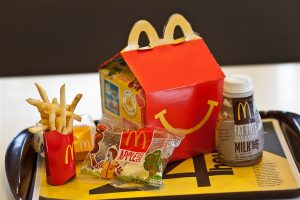 The petition’s main goal is to get McDonald’s and Burger King to completely do away with plastic toys in its kids’ meals.
Image: Bloomberg via Getty Images

Both Ella and Caitlin love to eat at these fast-food chains, and of course, they love the surprise toys, but they realized that many of the toys are made with and packaged in plastic. “We like to go to eat at Burger King and McDonald’s, but children only play with the plastic toys they give us for a few minutes before they get thrown away and harm animals and pollute the sea,” they wrote in the petition’s description. They added that big companies should refrain from substituting plastic toys with toys made of recyclable plastic and rather do away with it completely.

Many have signed the petition

The petition has gotten a lot of attention – it’s been signed by more than 300,000 people who agree with the two sisters. One signer of the petition wrote, “The toys are a waste of money and resources, as well as adding to our world of waste products.” Another commented, “Single-use plastics should be banned and these toys are useless and become landfill waste. McDonald’s needs to lead the way in banning them.”

Another was pleased with the young girls’ initiative and shared their view that plastic toys should be banned entirely: “Let’s encourage Burger King and McDonald’s to give away recyclable and educational toys rather than disposable and wasteful ones. Or even none at all. By signing we are supporting very young people in having their voices heard, for the good of people and [the] planet. These young people are already thinking ahead about the welfare of future generations. Thank you Ella and Caitlin!”

McDonald’s is trying to bring about change

It’s great to see that the sisters are getting so much support. In the meantime, a spokesperson for McDonald’s told Today Food that reducing plastic is one of the company’s top priorities, saying, “We have an active global working group exploring the production of more sustainable toy options.” Well, that’s certainly good news. There’s been no word from Burger King just yet, but hopefully, they’ll be on board too. 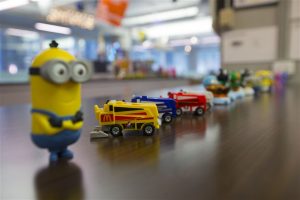 The sisters argue that the toys in Happy Meals add to plastic pollution because kids throw them away shortly after getting them.
Image: Chris So / Toronto Star via Getty Images

In the UK, McDonald’s has already geared up to make some changes – the company said that it will be reducing the number of hard plastic toys given away in Happy Meals during a six month period that will start later this year. During this period, the company will be testing different toys, like board games, books, and soft toys.

A spokesperson said that even though this will only be a temporary thing, the company is going to use it as “a test to understand more about what customers in this market want while we continue to execute our global work.” They added that while they cannot yet provide any details about what the toys in Happy Meals will look like beyond 2019, they are continuing their work to reduce plastic across the entire business. The company already made good on some of its promises, switching plastic straws for paper straws in all of its UK restaurants. They are now testing this change in some US stores as well.

We all need to help

The fight against plastic is going to be a long and hard one – most businesses (and us normal people) have been ignorant about the issue for way too long, but at least now, we’re all trying to do our part in bringing about some change.

What small changes have you been making to try and reduce your own plastic use? Any tips? Drop them in the comments!