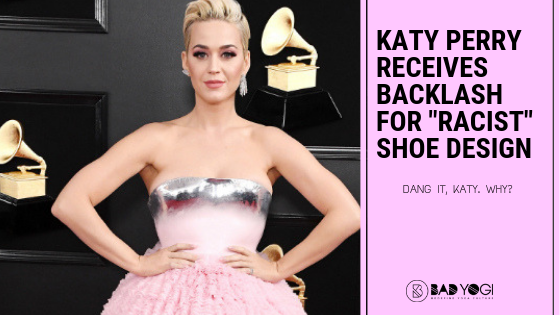 Katy Perry’s been having a pretty tough week. First, she was slammed for the very fluffy, pink dress she wore at the Grammys on Sunday, and now she’s getting some serious flak for one of her shoe designs.

Perry first debuted her line of shoes in 2017 in a partnership with Global Brands Group. CNN reported that the two shoe styles in question, which was released in summer 2018 as part of a collection of nine colors – including black, is receiving some serious backlash from the public. Why? The Ora Face Block Heel and Rue Face Slip-On Loafers are both designed to include protruding eyes, a nose, and full red lips. Putting the design on the black shoe caused many to call Perry out for creating a design that evokes blackface, branding it as “racist”. 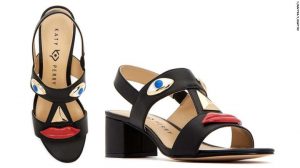 The shoes from Katy Perry’s collection that many say is evoking blackface.
Image: CNN

For those not familiar with what blackface is, it basically refers to the theatrical makeup that was used by non-black performers to represent a caricature of a black person. The makeup was black with exaggerated facial features. It was very popular in the 19th century and contributed to the spread of racial stereotypes.

Some members of the public were not happy

Many people who saw the shoes associated it with blackface and was unhappy with Perry for putting them out into the world. This comes days after Gucci also got some serious backlash for its sweater that featured full red lips. The Italian brand has apologized for its “wool balaclava jumper” that you can wear pulled up over your nose with a red-lipped cutout for your mouth. 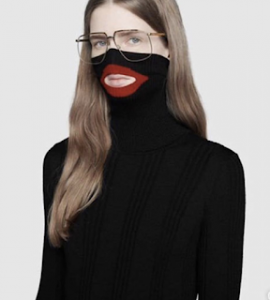 In the meantime, Indian Express has reported that Perry and Global Brands have released a joint statement in which they apologized for the shoes, saying that the design was simply meant to give a nod to modern art and surrealism. The shoes have been removed from the collection since. “I was saddened when it was brought to my attention that it was being compared to painful images reminiscent of blackface. Our intention was never to inflict any pain,” Perry and Global Brands said in the statement.

Social media users are divided on the issue

In the meantime, a division has been created on social media, with many condemning Perry and her shoes, while many others are standing up for her, saying that the whole affair is much ado about nothing.

One user tweeted that it should become a rule that no brand will create any combination that consists of a face and the color black.

Katy Perry ‘Blackface’ Shoe to Be Pulled from Shelves

Ok, can we just make this a rule that ANY product, service or person that is NOT Black will NOT create, promote or apply any combination of BLACK + FACE

Another user posted pictures of other brands’ products that also evoked blackface, saying that ignorance is never a fashion statement and that they are not accepting Perry’s apology.

Another asked whether the shoes are meant to be worn with the Gucci blackface sweater.

@katyperry so this what we doing now?!?! Blackface shoes to go with @gucci blackface sweater?!?! pic.twitter.com/Yuiv1DewWH

Users who thought that everyone was making an unnecessary fuss about nothing, also made themselves heard.

Some users pointed out that the shoes were not available in black only and that there were other colors with the exact same face.

Firstly, @katyperry shoe designs are not #racist. They’re black shoes with a face, also note the tan coloured shoes with a face. Looking at the picture, how do the shoes work? pic.twitter.com/Sp8KHO3I25

One user seemed to find the entire situation a tad amusing, while another said that if there weren’t shoes presenting the black community, Perry would probably have gotten backlash for that too.

Yea, you read that right.

This is our world.

Aliens are laughing at us. pic.twitter.com/PZlfHKwhp2

If #KatyPerry hadn’t included shoes to represent the black community she’d have been lambasted for that also, #damnedifyoudodamnedifyoudont #cantwin #GMB

As with everything else, it is important to remember that the wrongs of the past can still hurt people today. Even though it wasn’t Perry’s intention, some people did find the shoe design disrespectful. Then there are those who thought it wasn’t worth all the hype – there are shoes in other colors with the exact same face after all. Perry probably wouldn’t have put the design out there if she had known it would cause such an upheaval or be hurtful to some people – she has a professional image to uphold after all and no one wants to get all the backlash she’s been getting. It may be safe to say that she never intended to hurt anyone with the design.

What do you think? Is the shoes’ design disrespectful or is all the hype much ado about nothing? Sound off in the comments!