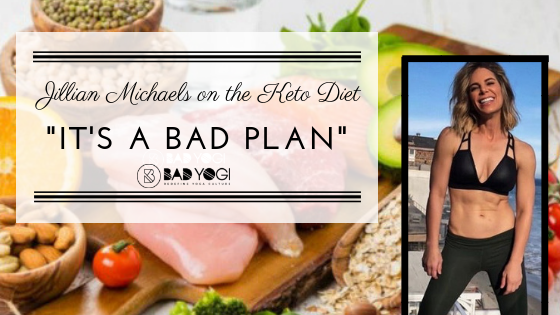 Jillian Michaels on the Keto Diet: “It’s a Bad Plan”

If you occasionally flip through magazines and click your way through websites to see what’s hot and happening in the world of health and fitness, you’ve probably come across the keto diet before. Recently, world-renowned fitness trainer Jillian Michaels made it clear that she does not support this diet at all and that it is “a bad plan”.

Michaels spoke to Women’s Health for their January 2019 issue and revealed that she does not believe in the keto diet at all and can’t see why anyone would want to follow it. Her opinion seemed somewhat unpopular, considering that celebrities like Megan Fox and Kourtney Kardashian have given the diet credit for their famous figures.

What is the Keto Diet?

Before making any judgments, it makes sense to look at what exactly the keto diet entails. Scott Keatley, R.D., of Keatley Medical Nutrition Therapy describes the keto diet as one that minimizes your carb intake while increasing fat intake, tricking your body into using fat as a form of energy. After about two to seven days of following the diet, your body goes into a state called ketosis – this means that there aren’t enough carbs to provide your cells with energy. At this point, the body starts producing ketones (hence the name keto diet), which are organic compounds used to replace the missing carbs. This results in your body burning fat to provide you with more energy.

In theory, it sounds pretty good. Eating foods rich in fat without feeling guilty is anyone’s dream, but is it good for your body in the long run? Jillian Michaels certainly doesn’t think so, saying that her main issue with the diet is that it prevents your body from getting the macronutrients it needs – like protein, carbohydrates, and nucleic acids. Since your cells are basically made up of these macronutrients, you’re quite literally starving them. It might be easy to disregard her opinion, but experts actually agree with her.

Last year, Business Insider reported that cardiologist and nutrition researcher Sara Seidelmann has published a study in which she discovered that diets like keto, which ban entire food groups, can assist with weight loss in the short term, but that it can also send dieters to an early grave. Marcelo Campos, MD., who works as a primary care doctor at Harvard Vanguard agrees, saying that the long-term effects of the keto diet are still unknown. He also added that the diet relies heavily on foods like red meat and other salty, fatty, and processed foods that are notoriously unhealthy. He suggested, rather, following a diet that is healthy and sustainable in the long run.

This aligns with Jillian Michaels’ views regarding the keto diet. Her word of advice to readers is to lose weight the good old fashioned way – by exercising regularly, avoiding processed sugar and grains, and simply following a balanced diet.

Losing weight shouldn’t be a punishment, it should simply be an initiative you take on to care for your body and feel like your best self. If that means you eat healthy all day and treat yourself to a giant doughnut at the end of the day, that’s fine – balance is always key.