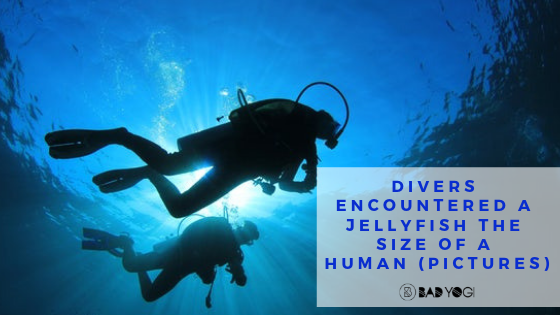 Divers Encountered a Jellyfish the Size of a Human (Pictures)

Have you ever seen a jellyfish the size of a human? No? Well, lucky for you, two scuba divers recently had the privilege to see a massive human-sized barrel jellyfish while diving off the southwestern coast of England – and it’s pretty amazing.

A massive jellyfish graced two divers with its presence

According to Today, biologist and wildlife broadcaster Lizzie Daly was exploring the waters with photographer Dan Abbott as part of “Wild Ocean Week” when they had an unexpected visitor. Daly started the “Wild Ocean Week” campaign to create more awareness around marine conservation. Her love for the ocean and its creatures paid off when she had the privilege to encounter a massive barrel jellyfish on her adventure under the sea. 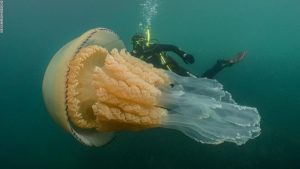 The jellyfish was the same length as Daly.
Image: Dan Abbott/Wild Ocean Week

These jellyfish are actually commonly found in the seas around the United Kingdom and they are regularly seen by beachgoers in the summer when they wash up on the shore, but they are rarely this big.

Why is this jellyfish so special?

What makes the jellyfish Daly encountered so special is the fact that, even though barrel jellyfish are known to be large, this one was larger than normal. According to CNN, Barrel jellyfish species can grow up to 3 feet long and weigh up to 55 lbs, but the one Daly and Abbott encountered on their expedition seemed to be about Daly’s size – including the extra length added by her diving fins.

When Daly was back on land, she couldn’t wait to share the experience with everyone, saying, “I have never seen any jellyfish that big. It was the size of my body and it was the best thing I’ve ever done!” We believe her. We’d give our right arm to have an experience like that.

WOW!! 🙀I can’t believe that just happened! On the last wildlife adventure of #WildOceanWeek, we head underwater around the coast of Falmouth, and spend some incredible moments with this HUGE barrel jellyfish. I’ve never seen anything like it. An insane last day filming with @lizziedalywild. We will both be at Maenporth beach in Falmouth tomorrow at 12pm for a beach clean, everyone is welcome. 🙌🏼 #jellyfish #ocean #scubadiving #epic #nature #underwater #cinematographer #diving #insane #panasonic #lumix #nauticam #wildlifephotography #travel #wildlife #wildlife_shots #naturephotography #photooftheday

An interesting fact about the barrel jellyfish is that even though they are so big, they are in no way king of the underwater world. They are actually the main prey of leatherback sea turtles. The one Daly encountered has definitely learned how to outsmart the turtles, that’s for sure.

You can have a look at the massive barrel jellyfish in the video below.