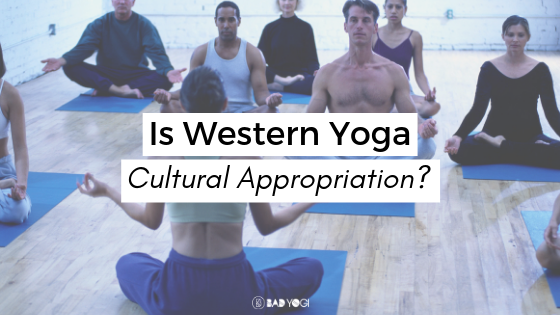 Cultural appropriation is defined as “the act of adopting elements of an outside, often minority culture, including knowledge, practices, and symbols, without understanding or respecting the original culture and context.”

I have no idea about Kim Kardashian’s case, but as for yoga and its modern practitioners, I have some thoughts on whether western yoga is cultural appropriation.

If I’m answering simply, I’d say not necessarily. This question implies that all westerners doing yoga is cultural appropriation which I think is a huge generalization. My personal opinion is that you can fully appreciate AND respect a tradition even without having had a full immersion into it.

If you’ve never been to Italy but love cooking Italian food, is it cultural appropriation if your homemade version of tiramisu varies from what you’d get at the source? I don’t think so, and I see the modern practice of yoga very similarly. I think the tradition of yoga exists on a spectrum. On one end up have the “purest” most traditional form, and on the other end you have beer and cursing yoga. I think most people’s practice of it falls somewhere in the middle. They have a great appreciation for what yoga does for the mind and body, and while they may not know all there is to know about the origins of yoga, they still respect the roots of the practice.

For me, this is enough. I don’t want anyone who benefits from this practice to feel guilty for practicing because they might be culturally appropriating it. If you respect it, that’s all you really need.

This is my oversimplified answer but as usual, I’d love to hear from you. What do you think? Have Westerners culturally appropriated yoga? Did Kim Kardashian do the same with her new line?