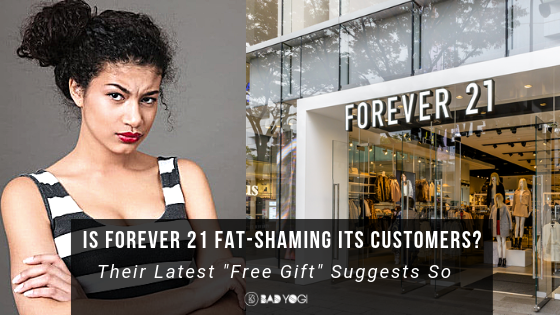 Is Forever 21 Fat-Shaming Its Customers? Their Latest “Free Gift” Suggests So

Don’t you just hate it when fashion retailers fail to sit back and think about their customers for just one second? Well, Forever 21 is definitely regretting not taking a step back and evaluating their decisions after the recent backlash it received from its customers over a “free gift” that came with their online purchases.

Finding a strange gift in a clothing parcel

Forever 21 is pretty popular – anyone who wants to buy some cool, fashionable clothes without paying a fortune usually buys from the retailer. They also sell plus-size clothes, but after customers received their latest packages, they were pretty upset. You see, the retailer thought it nice to include a free gift in the package. A free gift in the form of an Atkins diet bar. Yep. That happened.

People were not happy

According to Today, customers were not happy – and understandably so. Many called the “free gift” hurtful and offensive. Of course, people took to social media to complain about the Atkins bar and found that many others felt the same way they did. One Twitter user, Gigi, expressed her unhappiness, saying, “I have received my order of 5 items from the plus section…..oh and this #atkins bar that slipped in there. I don’t take kindly to people telling me how to live my life.”

Many shared Gigi’s opinion, and it soon came to light that many people who ordered plus-sized clothing were the ones who found a diet bar included in their order. Other Twitter users started to point this out, and soon social media was ablaze with furious people.

I went from a size 24 to 18, still a plus size girl, so I ordered jeans from @Forever21 Opened the package, when I looked inside I see this Atkins bar. What are you trying to Tell me Forever 21, I’m FAT, LOSE WEIGHT? do you give these to NON-PLUS SIZE WOMEN as well? pic.twitter.com/ds8kUTs7T7

my mom ordered some clothes from @Forever21 ‘s plus size collection and they sent a Atkins diet bar along with the stuff she ordered💀 pic.twitter.com/Lxi6XnuOB1

Forever 21 is sending diet bars with clothes you order and that’s so insensitive holy crap like…. how about we don’t make someone negatively reflect on their body image when trying to just order some new outfits ? ????

According to CBS News, one customer even pointed out that she had recovered from an eating disorder and that including a diet bar in a clothing shipment is in very poor taste.

Of course, there are always two sides to a story. Other people pointed out that Forever 21 customers were taking the entire diet bar situation out of context, with one Twitter user posting that he received the same bar when purchasing a new motherboard at a computer parts store.

people need to calm down with that Forever 21 shit. The granola people probably just did like a promo deal with multiple companies because I got one with my order of a motherboard off of NewEgg (Computer Parts Store) pic.twitter.com/ZiizixkEfu

The company could’ve put more thought into it

So perhaps it’s true and the diet bar company just wanted to promote some of its products. The thing is, it’s probably not wise to include a diet bar with any sort of clothing package. It sends a very clear message – try this to lose some weight! In a world where everyone is trying to just get to a point where they can accept their bodies exactly as it is, this was obviously a bad idea and Forever 21 could’ve put more thought into it.

Forever 21 responded to the complaints, saying that the bars were included in all packages, not just those containing plus-sized clothing. In a statement to CBS News, the company said that the bars have since been removed from all orders. “The freebie items in question were included in all online orders, across all sizes and categories, for a limited time and have since been removed. This was an oversight on our part and we sincerely apologize for any offense this may have caused to our customers, as this was not our intention in any way,” the statement read.

Well, all we can hope for is that the company will take more care when it comes to what they give away as a free gift to their customers in the future. If they had really taken a minute to think about it beforehand they could probably have avoided this entire ordeal.

Over to you: What do you think about all this? Were people’s reactions justified or were they overreacting? Drop your thoughts in the comments.