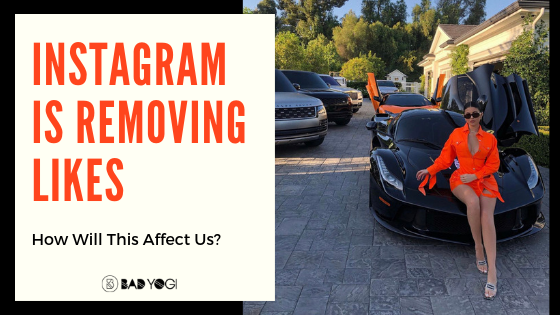 Instagram Is Removing Likes, How Will This Affect Us?

While I was on a recent group tour in Israel, some of us got to talking about Instagram. We were on a boat, and 15 minutes deep into taking hundreds of bikini pictures; abs sucked in with correct lighting, hair blowing at the right angle, busy mentally listing all the hashtags I would later use. I posed a few questions to everyone about Instagram and why it’s so important, with one girl responding, “comments are way more important to me than likes.”

It made me wonder why likes and comments are important at all. Is it wanting to be better than others, and feeling competition? Is it wanting to “influence” people? (At what point will there be so many influencers that there is nobody left to influence? The questions that keep us up at night.) Is it for validation? Who doesn’t love seeing all those likes roll in after posting a picture that took ages to filter?

Well, apparently Instagram has been testing out the removal of likes in various countries. After starting a trial in Canada, it’s now moving to Australia, New Zealand, Ireland, Italy, Japan, and Brazil.

Adam Mosseri, Instagram chief, said this when the first trial started in Canada, “We want people to worry a little less about how many likes they’re getting on Instagram and spend a bit more time connecting with the people that they care about.”

While the change will be welcome news to many, especially those who are left with low self-esteem after scrolling through a feed full of perfect hair, exciting vacations, and #couplegoals, things are different for others. For “influencers” who rely on Instagram for their income and/or businesses, the lack of likes could have a negative effect on them. Millions of people are paid for sponsored posts, and companies look at likes (among other things) to decide if they will work with that influencer. For the rest of us though, it might be nice to see less advertisements when we’re bombarded with them hundreds of times a day.

The change on Instagram could also change the way influencers use the platform; rather than desperately searching for likes, they may be more likely to create a sense of community now on their page.

Quynh Mai, founder and CEO at digital agency Moving Image & Content, told CNBC, “You see a lot more [YouTube] influencers building careers, businesses, brands, out of their influence than Instagram influencers, because that ecosystem is about building community, responding to comments, reading fan letters in a YouTube video — a deeper engagement with the fanbase — where Instagram engagement with your fan base was based on emojis and thumbs up and likes, which is a very shallow measurement of community.”

So, what is the purpose of Instagram and other social media networks? In the beginning, these platforms were used as a way of connecting to friends and family, and updating those loved ones on our lives. However, as time has continued on, things have taken a turn for the more, shall we say, narcissistic.

Instagram is now used to promote only the best parts of our lives, whether it may be fake or not. Have you ever had a bad day, posted a sunset photo with a caption about how much you love life, and felt better after receiving 50 likes and 3 comments? Sure, you may cry yourself to sleep, but at least people are jealous of your fake life right?

So, will taking away the number of likes take away the self-esteem issues that come with thinking other people have better lives? According to a 2017 study by Royal Society for Public Health, almost 1,500 people between the ages of 14 and 24 were surveyed and it was concluded that Instagram is the most detrimental social media app to mental health.

While taking away Instagram likes may take some of the pressure off, especially in terms of popularity, will it have any effect on the mental health problems that seem to be caused by the social media platform?

What do you think? Let us know your opinion in the comments below!