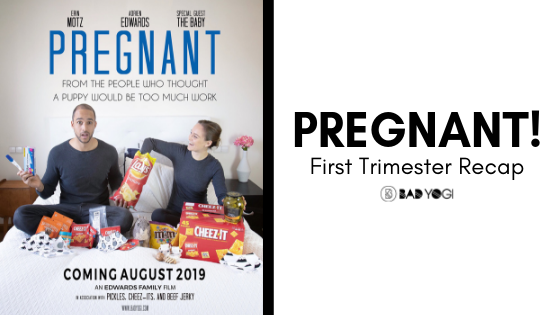 PREGNANT?! WHAT?! An exact emoji story of all my feelings when I found out would go something like this: 😳🤬😭😧😭😧😭😌😍😍😍 But more on why later in this post…

How far along am I?
Coming up on 14 weeks! The little Babe was moving SO MUCH at this appointment! Kicking, looking like it was trying to stand up, crossing legs, crossing arms behind its head… it was so cute!

First symptoms/how I knew?
I’ve been off the pill for about 6 years, so I’m really aware of my body’s cycles. I know when I’m ovulating and I can even feel which side I ovulate on every month. Just want to clarify that not everyone has the same experience, so this doesn’t mean you SHOULD “feel” when you’re ovulating, it’s just some women do.
Anyway, since I knew this, I knew it was a possibility I *could* be pregnant. It was literally just a couple days after, you know… and when I woke up in the morning, my boobs were SO SORE. They usually get a little sore a few days before my period, so I thought it could also be that. But the second tipoff was the day after that. I was working out and felt completely and totally WIPED OUT trying to do burpees. I know they’re tiring, but I’ve gotten pretty fit over the last year, so I could do 15 burpees without stopping. On this day, I did 3 and felt like I could hardly breathe. I just wanted to lay down! I knew something was up, but again, I also thought it could be my period was approaching.

I took a pregnancy test 7 days after I ovulated and saw the faintest line possible, so I decided to wait a few more days before trying again. I took another on day 10 and there was a more clear (but still faint) second line– I knew I was pregnant! But I didn’t tell Adrien yet… I had a plan 😉

How I told Adrien:
This was around Adrien’s birthday so I figured I’d surprise him with this news a few days later for his actual birthday. I created a scavenger hunt that took him around our apartment with the last card being inside the oven. I pasted the pregnancy test to a small poster that said our family was expanding to 3! I filmed it too. He was SO surprised and SO happy. We both cried and walked around the rest of the day going, “can you believe this?!”

How’s morning sickness?!
Umm, I sort of hate myself for this, but I wouldn’t know! I’ve had zero morning sickness. The only “sick” feeling I’ve had was sometimes late at night. I’d get slightly nauseated before bed because I was SO HUNGRY, but otherwise, nothing. Oh, and I also did get legitimate stomach virus that made me terribly sick for 30 hours, but that was a different thing altogether!

Okay, but you’ve been exhausted, right?
Again, NO!! I know, I know– I am the actual WORST! There was a couple weeks where I was ready for bed by 8:30pm and waking up at 5:30am (so random!), but once that little phase passed, I was back to normal. No exhaustion, regular energy levels, and feeling great!

Okay b*tch, are you having ANY symptoms?! 😂
HAHAHA, I know how annoying I sound for anyone who’s pregnant and struggling right now. I hate myself a little bit, too!
– Like I said, those first couple weeks made me more tired than usual, but nothing crazy.
– SUPER sore boobs until around week 9.
– An aversion to thick Greek yogurt!
– Bloating
– SUPER dry skin!
That’s about it!

What are your cravings??
I’m usually ALL about chocolate– chocolate in ANY form! But being pregnant has hijacked my taste buds. I’m uninterested in sugar and chocolate, and 1,000% interested in salty, sour, and spicy! I want all the chips, all the beef jerky, all the meat, dill pickles (which I can’t get in France), avocado toast with lime juice and a generous sprinkle of pink salt, grapes, Indian food, and Chipotle (also can’t get that here, haha). I liked all of that before I was pregnant too, but now it’s like my desire for those foods is NEXT LEVEL.

How I felt about the news initially:
We knew we would start trying for a baby, but I honestly didn’t expect it to happen so soon. I know SOOO many couples our age who struggled with fertility, and you just never know what you’re walking into when you start down that journey. So I anticipated it taking it a while.

When I found out, I was shocked! Then terrified! “What have I done? My life is going to flip upside-down! My body is going to be destroyed! I’ll never sleep again!” These were the fears flying through my head. I think I cried every day for a good week before I started getting on board with the idea. And the more excitement our families showed, the sadder I got! I felt like everyone’s excitement and joy was so far ahead of mine I’d never catch up.

A couple weeks later we went to the Doctor and I heard the heartbeat. THEN it felt real. Suddenly, I felt like this little soul chose me, and I couldn’t feel anything but joy and gratitude that it did. And every day since, it’s felt a little more real, and a lot more exciting. Every day I feel more and more confident in my ability to be a Mother and more grateful for the opportunity to become one.

What perspective helped me:
I started to shift my perspective about pregnancy from one of fear and resentment (My body’s going to change! What if I look terrible afterwards?!) to one of gratitude. The way I see it now is, we never know what life will throw our way or what will happen. It hit me that this could be a ONCE IN A LIFETIME experience! Do I really want to waste something as beautiful as this by being afraid of it? Do I really want to live in anticipation of every potentially negative outcome instead of being present with this little soul as it grows? I don’t. That mindset shift really helped me move away from living in fear, to living with an overwhelming sense of gratitude for this entire experience– regardless of what it brings me. I’m more focused on the fact that this little person is a combination of me and the person I love most in the world– Adrien. I can’t WAIT to see how Baby looks and acts! I can’t wait to see if Baby has my feet or his, if it will have both of our long eyelashes (!!!), if it will have Adrien’s curly hair (I’m betting yes!), or light eyes like me. Now I’m truly looking forward to EVERY phase of pregnancy, birth, and motherhood.

So what’s gonna happen with Bad Yogi? Is this why you’re bringing other teachers into BYS?
NO, bringing new teachers into BYS has been in motion since last summer. The timing of filming just happened to coincide with me being pregnant. The day I found out I was pregnant, I immediately went into planning mode. The following weekend we began filming for BYS and filmed NON-STOP until I had enough classes to fill the Studio through February of 2020. And NONE of those are prenatal or baby-related. Bad Yogi is NOT going to turn into a Mommy/baby space. I’ll share my experience and journey here on the magazine and some updates on social media, but this is just one part of me, not ALL of me. And I know it’s definitely not even a part of many of you, so I have no intention of this taking over. If you want to see all of the oversharing of baby stuff and this pregnancy journey, follow me @erinmotz on IG.

So will you do any prenatal classes?
YES! I’m going to do a bunch of prenatal classes for BYS as well as for YouTube. I’ll talk about how I’ve been modifying for strength training and yoga in a different post too 🙂

Phew! This was a LONG post! Now over to you! Here’s a fun poll I’m taking: I’ve had a gut feeling about baby’s gender since week 5, but what do you guess it will be?! Do you have children? Do you want them? Are you currently pregnant?! Tell me!