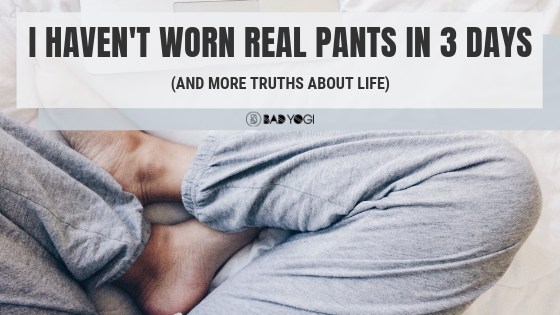 It can be tough seeing the best parts of everyone’s day, feeling like you’re the only one who hasn’t eaten pizza in Positano or got a boat load of free stuff to show off on Youtube. We strive to show the most perfect version of ourselves, when that person is really some mythical unicorn that doesn’t actually exist. Yet, we convince ourselves that all the other unicorns must have it all figured out and something is deeply wrong with us because we have hormonal acne or fed the kids Mcdonalds last night to get some peace and quiet.

There are certain truths in life that exist, yet we don’t talk about them. They’re secrets we never talk about, too ashamed to ask anyone else if they feel the same way.

When I lost my son in March to a miscarriage at 18 weeks, my usual positive attitude was out in full force. I kept trying to tell myself it would make me stronger, that I would learn a lot from the experience. While these things are actually very true, they did not take away from the fact that I lost my son. The situation just sucked; it was shitty, and that’s it. No silver lining, no positive quotes, no motivational speeches really helped. What did help, was accepting the situation.

Sometimes there are situations in life in which trying to be Susie Sunshine just isn’t going to cut it. When someone you love dies, when you get fired from your dream job, when you go through a divorce. The most you can do is accept what happened, and choose to start fresh hoping for happier times in the future.

Don’t use it as an excuse to lay in bed for the next 3 years, letting yourself go, and no longer striving for progress. What happened, happened. You cannot change the past, but you can change your present, and the future going forward.

2. It’s okay to rest sometimes, even if all the motivational speakers keep telling you to get off the couch and stop eating Cheetos

Something really embarrassing happened to me a couple weeks ago, and nobody was around to witness it, so of course, I’m going to tell you about it. I was chilling on my couch, preparing my schedules for the week ahead, watching motivational videos on Youtube and halfway through a bag of Cheetos.

Tony Robbins came on with one of his tough love speeches in which he talks about being hungry for your goals, and if you really want them you have to take action. I was fired up, thinking “Yes Tony, I got this! I’m going to make my dreams come true!” Then, he said if you waste your life sitting on the couch eating Cheetos all day, you will never get what you want, and basically you’ll be nothing but a loser forever. Okay, so while I was eating Cheetos on the couch I was being productive, but I still froze, hand halfway to my mouth, eyes transfixed on the screen in horror. Was Tony calling me out? Maybe, but who cares?

I calmed myself down and realized that I’m not some lazy millennial living in my parents basement playing video games all day, as the stereotype goes. Sometimes, I need time to rest, and so do you.

There is nothing wrong with watching trashy reality television and eating junk food, as long as you don’t do it every single day. Allow yourself to be a human being, and chill when you need to chill, zone out when you need to zone out. I don’t believe that even Steve Jobs didn’t take the occasional break for a crunchy snack and a television show he was really into.

3. If you post that yoga pose on Instagram, only to start watching The Bachelor while sitting on your mat, don’t be so hard on yourself

It scares me how well Youtube and Instagram seem to know me. When I go on Youtube to look for a yoga video I’m constantly fighting the urge to click on one of the videos in my recommended tab. Sometimes the urge wins, and 20 minutes after my planned yoga routine, I’m deep into the weird part of Youtube where people eat massive amounts of food on camera, and make Harry Styles fan videos.

Some mornings, the most I can do is 2 poses to put on Instagram, and other mornings I’m all zenned out and I can do an hour of yoga while I think about the damaging affects of social media, feeling above it all.

Allow yourself to feel how you feel in each moment without judgement. Sometimes you feel energetic and motivated, other times you feel like gum stuck to the bottom of your brand new Nike sneakers. Fighting our feelings just causes them to push harder sometimes. If you’re swimming in the ocean, it’s much harder to fight the current than allowing it to calmly float you to the shore.

As human beings, none of us are perfect, yet we all assume we’re the only one who occasionally indulges in too many spoonfuls of Ben and Jerry’s or has a little extra junk in the trunk. Embrace yourself for all your human qualities because the truth about life is that we’re all in this together, perfect in our imperfection.