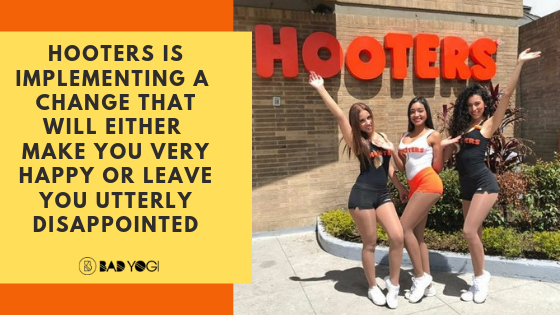 If you’re a fan of America’s most famous breastaurant chain, Hooters, you might be in for a bit of a surprise. The franchise recently came under new ownership, and there are some changes coming in the near future, some of which are already being implemented.

Ever heard of Hoots?

Those who live in Cicero, Illinois, (just outside Chicago) might know of the existence of Hoots, which opened back in 2017. This is an expansion of Hooters, but this restaurant is more family-oriented while still keeping all of the famous Hooters meals on the menu. The new owners, investment companies Nord Bay Capital and TriArtisan Capital Advisors, want to expand this since they have a more family-oriented vision for the restaurant’s future. If you’re a big fan of the original restaurant, don’t fear – Hooters will still retain a stake in the company, which means that all the things that make the restaurant so iconic won’t be going anywhere anytime soon.

According to Today, the main difference between Hoots and Hooters will be the dress code of the servers. Hoots’ servers are dressed way more conservatively – no shorts and skin-bearing tops, instead, servers wear khaki pants and orange, maroon, and black T-shirts. Also, where Hooters solely have female servers, Hoots will be all-inclusive, featuring servers of both genders. Hoots is also a counter-service-only restaurant. They have a one-page menu that features all the popular meals you find at Hooters, such as buffalo chicken sandwiches, buffalo chicken wings, crab legs, and fried shrimp.

Who are they catering for?

Hoots’ main target market is families and millennials and everyone who just wants a quick fast food meal. At Hoots, you can place your order at the counter and choose between taking your food to-go or eating at the in-store dining tables.

Since its opening two years ago, the Hoots in Cicero has been pretty popular. So much so that Hooters of America CEO Terry Marks says that they plan on opening additional restaurants later this year.

It seems that people are more drawn to the fast-casual experience these days instead of sit-downs. It’s great that Hooters is starting to change their appeal a bit, which might lead to them gaining even more customers, especially those who are more socially conscious. Owner and lead consultant of Key Restaurant Group, Doug Radkey, says that it’s crucial that the restaurant covers for the new generation, who are more focused on inclusivity.

“Providing a concept that equally employs males and females in both the kitchen and front-of-house, in addition to providing staff less provocative uniforms, sets this brand to compete in an era where staff culture, gender equality, and brand perception is just as important to younger restaurant-goers [as] the menu.”

Hoots is set to grow even more this year

It seems that the company is ready to take the jump and expand its Hoots chain, with more Hoots restaurants set to open in the Chicago area and Atlanta this year, with more to follow in 2020. The company has not yet announced whether it will turn some old Hooters restaurants into Hoots, but we think it’s pretty dope that they’re expanding the restaurant chain to cover for a wider range of people. According to Radkey, Hoots provides them with an awesome opportunity to transition away from the original Hooters.

“I think this is a great opportunity for the brand to start transitioning away from the original Hooters, which will be a lot easier to execute than simply re-branding all of the current Hooters locations. This is a step in the right direction of becoming more in line with the social consciousness of the increasing majority of today’s population.”

We’re pretty sure that Hooters won’t disappear entirely, but it’s great to see such a popular restaurant chain starting to be more inclusive. In the meantime, we’ll keep enjoying our buffalo wings while we wait for more Hoots restaurants to open.

What do you think about this transition? Would you be sad to see Hooters go? Tell us in the comments.