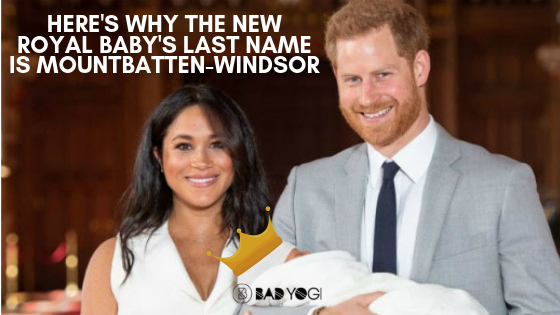 This week has been buzzing with news about the birth of Prince Harry and Meghan Markle‘s son. Everyone was excited to find out the baby’s gender, and of course, after that, we were all wondering what the new little man’s name would be. Once it was announced, his surname sparked some questions, with many wondering where it comes from. Well, we’ve got the answers you seek.

The new royal baby has a name

Harry and Meghan announced the name of their baby boy on Wednesday as Archie Harrison Mountbatten-Windsor. People immediately started to break down the name, trying to figure out the meaning behind it.

A post shared by The Duke and Duchess of Sussex (@sussexroyal)

Buzzfeed reports that many thought Archie might be a nickname at first, but per the palace, it’s not a nickname for anything – it’s the baby’s first name, full stop. Harrison, which is his middle name, is believed to actually refer to the fact that he’s literally “Harry’s son”. How cool is that? Then there is the surname, which had a lot of people talking, since the royals actually didn’t really have surnames for centuries. As it turns out, Mountbatten-Windsor is actually the official surname of the British Royal family, so it makes total sense that Archie bears it.

The history behind Mountbatten-Windsor

For those wondering about the history of the surname, it’s actually quite interesting. According to Harper’s Bazaar, the surname is a nod to Queen Elizabeth II and Prince Philip, Archie’s great-grandparents. As mentioned before, the royals didn’t always have surnames – their ancestors used to take the names of their father’s houses.

This all changed in 1917 when Queen Elizabeth II’s grandfather, King George V, adopted Windsor as his official last name for all the descendants of his grandmother, Queen Victoria. When she took the throne in 1952, Queen Elizabeth II confirmed Windsor as the family surname. After she and Prince Phillip, whose surname was Mountbatten, got married, they decided that they would like to differentiate their descendants from the rest of the royal lineage, thus giving them the last name Mountbatten-Windsor. This meant that any child of the Queen in need of a surname would be given this name.

Archie does not have a royal title

Archie does not yet have a royal title. His father, however, has three – Duke of Sussex, Earl of Dumbarton, and Baron Kilkeel. Any one of these names could’ve been given to Archie as a “courtesy title”, but his parents decided against it. Giving a royal child the Mountbatten-Windsor surname is not required, but should Harry and Meghan have more children and decide not to bestow any royal titles on them either, they will also bear this name.

Harry and Meghan did not bestow any royal title on their newborn son.
Image: Getty Images

We’re delighted that the little man has finally arrived and that we didn’t have to wait too long for his name, and now we all know a little bit more about the history of Brittain’s royals.

That’s all for today’s history lesson, so over to you: what do you think of the new royal baby’s name? Drop your thoughts in the comments.