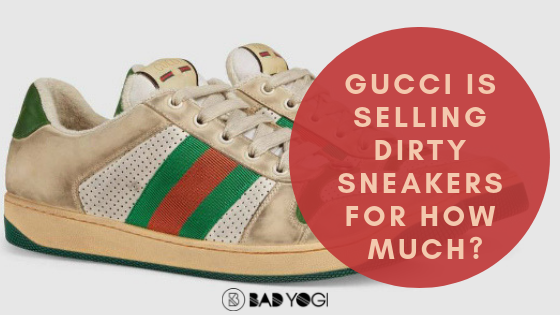 Gucci is Selling “Dirty” Sneakers for How Much?

We all love our sneakers. They’re comfy, they fit with basically anything, and if you buy a pair that’s good quality, they can serve you well for quite some time. The question is, how do you know when it’s time for a new pair? Well, when you’ve spent a good half an hour cleaning them and they still look horrid and, well, just old, we’d say that’s a pretty good indicator. It turns out that our perception is completely wrong, according to Gucci anyway.

The dirtier, the better

The Independent reports that the fashion house is now selling trainers that look like the ones in your closet that you really love but know you need to throw away. The good news is that apparently, those good old dirty sneakers are worth a whopping $870. At least, that’s what Gucci is asking for their new pair of “dirty” trainers. These trainers are part of Gucci’s Screener leather sneakers for men from its Cruise 2019 collection. 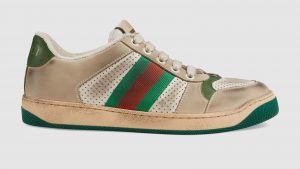 Sky News reports that the sneakers sparked some backlash from critics who said that the fashion house is “commercializing poverty” with the new look. Gucci, however, said that the trainers simply reference old school materials that are inspired by vintage sportswear. They added that the designers were influenced by classic trainers from the 70s.

Add some sparkle and call it fashion

If you’re rolling your eyes thinking that it’s ridiculous to pay  $870 for a pair of “dirty” sneakers, you ain’t seen nothing yet. There are different variations of these sneakers. One design features a crystal chain and is selling for $1,590. The fashion house said that the “Art Deco GG Chain” was inspired by the idea of putting contrasting elements together in new ways. Uhm, okay. So the shoe looks dirty but it’s got a lot of sparkle. Something new indeed. 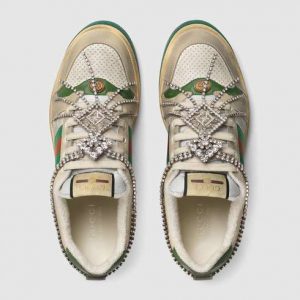 One of the designs features a crystal chain.
Image: Gucci

Another pair that falls in the middle of the price range between the ordinary “dirty” sneaker and the one with the crystal chain, features removable cherries with crystals over the laces. You might want to think twice about throwing out those dirty, worn out pair of sneakers that still live in your closet. Just add a bit of sparkle and everyone’s going to think your old pair of Skechers is a brand new pair of “dirty” Gucci shoes. 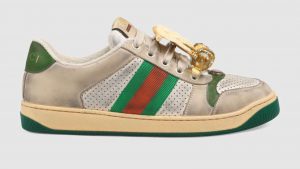 Another design features removable cherries with crystals over the laces.
Image: Gucci

Most people seem to think that it’s absolutely ridiculous

After seeing the ad for the sneakers, many people took to social media to share their thoughts on what many seemed to think was a ridiculous design, with one commenting that the trainers are an example of “peak capitalism”. Another said that “some people have more money than sense”. Someone working in the fashion industry even commented that things like this sometimes make them ashamed to be a part of it. Other users were making fun of the situation, highlighting the fact that they think it is a pretty ridiculous design.

Y’all spending thousands on shoes from gucci that look they were taken from the set of a 90’s movie made in the UK.. scuffed. Dirty white £20 trainers..

Others added some witty and somewhat sarcastic comments, saying that it’s ridiculous that these sneakers can be called “fashion” in the first place.

What do you make of these “dirty” trainers Gucci are selling for a mere £615? Bargain, right?! 🤔 #jeremyvine pic.twitter.com/ONqNUxgl7T

Then there were some people who thought that it was a “to each their own” kind of situation.

it’s their money, their choice….i personally wouldn’t waste my money on dirty trainers but i know there are collectors that restore shoe/trainers…some are on youtube…people have the right to spend their money on anything they want, if you don’t like it that’s your problem.

Gucci is not the first brand to get “down and dirty”

Funnily enough, Gucci is not the first brand that is selling trainers that look a couple of years old. According to the Independent, Golden Goose did the same thing last year, but they took it a step further – instead of making the trainers look as if they were dirty and old, they made them look dirty, old, and in need of some sewing back together. The trainers looked as if they had torn loose in some places and had been taped-up with good old duct tape. Critics accused these shoes of “glorifying poverty”. 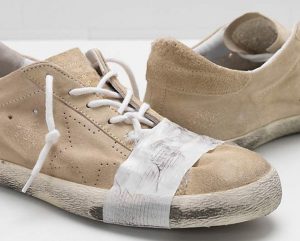 Is the future filled with “dirty” shoes?

Paying $870 for a pair of sneakers that look like they’ve been worn for a couple of years might not seem very appealing to most. If you really think about it, it must feel pretty weird to spend all that money and then taking very old and dirty looking sneakers out of the box. Then again, this might end up becoming a massive trend and those who hate them now might end up liking them later. Stranger things have happened.

If you feel like trying out the look, dig those dirty old sneakers out of your closet and add some sparkle – that’s if you hadn’t gone all Marie Kondo on your closet yet. Looking like you’re wearing Gucci has never been cheaper.

What do you think? Are these Gucci trainers absolutely ridiculous or is it cool and original?